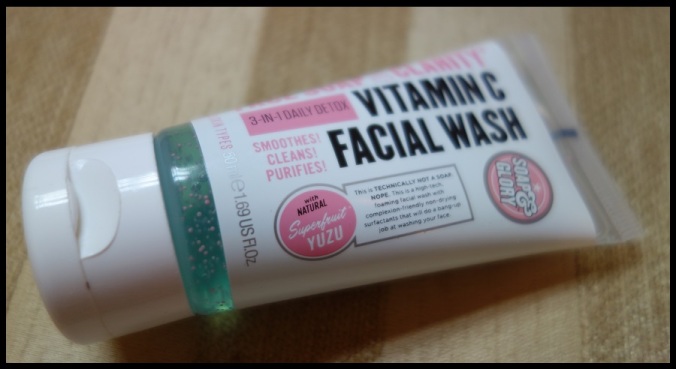 With the weather changing here in the UK I’m starting to change my skin care routine to a more autumnal or winter one as my skin tends to need more moisturising products in the winter time. One that I have used in the past, years ago now, and I thought I’d try again is the Soap and Glory Face, Soap and Clarity Vitamin C Facial Wash. As I got this one in a set it isn’t a full sized product and this one has 50ml of the face wash. A full sized version holds 350ml and costs £8 and can be found on the Boots website. It’s one of the products that I’ve seen in every Boots store I’ve been into though so I’d think they’d have it near you if you can get to a Boots.

According to the website this is suitable for all skin types and is a 3-in-1 face wash that smoothes, cleans and purifies, which sounds like most face washes to me. One thing that makes this one different to a lot of other slightly scrubby products is that, although it does have scrubby beads in it these are jojoba beads, not plastic microbeads. This does mean they’re softer and it’s not a scrub so it doesn’t give you the exfoliation of a scrub or exfoliator but if you have sensitive skin, like mine, then you don’t want something that has the harsh scrub effect anyway. They are also a cruelty free company but I don’t think this is a vegan or vegetarian friendly product, it would be best for you to check out the ingredients as a lot are the scientific names and chemicals so I don’t know where they come from.

I will say about the packaging, purely because I always do and you might come across a mini travel sized one anyway so this may be useful but I know it’s not the same as the size I’ve seen most often in stores. The squeezy tubes that Soap and Glory do for their mini products are great, if I could find a way to easily put other products in them for travel I would. The lids stay on well, they click firmly and don’t twist off easily at the part where the cap is attached to the tube, I can’t get this one off at all at the moment. The only slight negative with this particular product in them is that it makes a bit of a mess with the residue left at the hole it comes out of, it’s not much but it can build up or dry out before the next time you use it and you end up with a blob of face wash that’s harder than the rest and doesn’t lather. The plastic used for the squeezy bit is really strong and easy to use, it can be pressed very easily and you can roll it up tight when it comes to the end of the product so there’s hardly any left if you cut it open to get the very last out.

The full sized bottles are the same as a lot of their larger face product bottles, I have a micellar water one, and they’re good but I have known the flip top part of the lid to snap off when it comes to products that last a long time, this is definitely one of them. If you’re going to get this product I’d suggest having a smaller bottle to decant it into, it’ll mean there’s less stress on the big bottle with everyday use and you also have a smaller bottle out on the side or wherever you keep your face wash. I like the look of the Soap and Glory line in general, the simple designs with the different coloured fonts on the face washes are nice and are the kind of bottle I wouldn’t mind having out on my side in the bathroom as they look clean and don’t really clash with anything.

I like how you can see the product through the bottle, that’s the same for both sizes, the bright blue is really striking and you can see the little pink beads of jojoba floating around in it. The product itself is pretty thick, if you have it on your hand you can hold it vertically without it dripping straight off and you need very little to make a nice amount of lather. You are meant to apply it to a wet face to create the lather, which also doesn’t need a lot of product, but I’ve found that lathering it in my hands a bit first makes it easier to apply to my face and there’s less rubbing so less chance of irritation. I think the older version of this used to have beads that burst and released something, or maybe that was just a similar Soap and Glory product. This version doesn’t have that so there’s no risk of bursting these things before you’re meant to on your face.

I suppose before I review any skin care for you it would help to know what my skin is actually like. It’s a bit of an annoying combination of acne prone and very dry but becomes oily with some products and seems to react to some ingredients and scrubs in general do not get on with my skin. Basically it’s hard to find a good exfoliator that doesn’t sting because of the acid or whatever they use if it’s one of the liquid ones or that isn’t too scrubby and doesn’t include microbeads.

As far as how it makes my skin feel I have had no problems with it. I will say that this is not the only product I am using, I use Black Magic from One Hand Washes the Other twice a week as it helps reduce any spots I have but I need something neutral in between. I think that’s the best way to describe this one really for me, it’s a neutral face wash. It does leave my skin feeling nice and fresh, it is smooth and it’s definitely not drying for me so that’s all positive. But it also isn’t a wow product, I do like how my skin feels after using it but for my skin type I would never use it as the only product. I think if you have normal skin or sensitive but not acne prone skin this might work as an only product for you.

After using this product I do feel my face is slightly moisturised, maybe, but it definitely needs a moisturiser afterwards and I’ve seen some reviews say it’s slightly drying. I have read some reviews that say it’s helped with spots and, although it doesn’t have that effect on me, I guess I can see how that would work as it’s not a product that leaves your skin feeling dewy and you definitely feel clean afterwards. It might be worth considering for this if you get small spots, I wouldn’t say for the deep acne you can get or if you get spots regularly rather than the odd breakout but it’s still worth trying at £8 for such a big bottle when a lot of the spot treatments cost more for less.

At the end of the day I will keep using it, I can see this small tube lasting me a couple of months anyway, and I’m probably going to purchase a full sized version, simply because I’ve spent years finding one that fits into what I need and this one does pretty well. I do like this product and it works well for my skin so I would recommend it if you have skin that sounds similar to mine (though it is rather specific and, as I said, this is not the only product I use) but it’s not one I’ve fallen in love with. I guess that’s partly because of what I want this kind of product for; it’s hard to get excited over a product that just keeps your skin the same as it was before it was washed (but cleaner), but that is what this one does for me and I’ve tried so many different products that have ended up with a negative effect that this is actually pretty good.

As a face wash this is nice. I think I would recommend it as one to try if you want something that’s a nice neutral product. If your skin doesn’t have any really specific needs, other than maybe sensitivity as it didn’t make my sensitive skin flare up, then it might be worth trying. If you have normal or combination skin it could be a good product for you as I did find my skin wasn’t overly oily or dry afterwards so it did have a bit of an effect on these areas but if you have specifically oily skin, going by how it has worked for my skin I’d say try something else. Dry skin it might be worth trying, as I said earlier mine is definitely dry, but it won’t be one of those face washes that leaves you skin feeing moisturised. It’ll be clean and it’s definitely helped with the flaky patches I get but the overall dryness didn’t disappear.