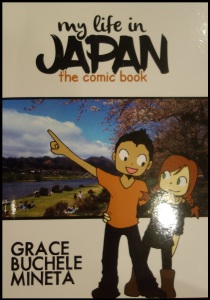 Title: My Life in Japan

Publisher and year: Texan in Tokyo Press (self published), 2016

Earlier this year I mentioned this book in a post but I didn’t post a review simply because I don’t think it was available unless you’d funded the Kickstarter campaign so wanted to wait until I was sure it was out. It’s been out for a while now, I think a few weeks though I’m not really sure, as an online Kindle version here (or on the Amazon site for your country) and costs £3.65 or you can get a PDF version in English or Japanese from her Etsy store here, it costs £4.13 in both languages so it’s a bit more but it is readable on any device that can read a PDF file. As only a limited amount of the physical books were printed I don’t think they will be available now, I got mine as I backed the Kickstarter campaign and I think some were sold on the Etsy store.

This is the fourth comic book that Grace has released, though this is the first in full colour and where it is purely comics. Her and her husband, Ryosuke, have a YouTube channel and she writes comics and posts on the Texan in Tokyo website. Some of the comics in the book are ones from the blog so you can access them for free if you look through all the blog posts but there are quite a few that are exclusive to this book.

I’m not going into too much detail ono the physical book as it’s not actually available but I will say that I really like the quality and the paper it’s printed on is strong and has the slightly shiny finish that means it’s easy to turn and you get the impression the colours will stay nice and bright. It’s a good size for carrying around and not too heavy. I do love the bonus postcard that came with it, the same as the front cover, and the fact that it was signed by both Grace and Ryosuke. I think that if you buy physical books from the Etsy store in the past they have been signed, I’ve only got them from Amazon before so not 100% on that.

I do love comic books, I think it goes back to reading Dad’s old Snoopy books growing up, and I love the simple art style you get in a lot of comic books, the way you can tell the characters and expressions with simple drawings and telling a story that way always seems more fun to me than traditional books. The comics in this book are all about the life of Grace and Ryosuke in Japan, some of them are very short and take up one side of a page but others are a bit longer. They’re quick and funny and it’s easy to pick the book up, flip it open at any page and read for a bit. Also with 170 pages there are quite a few stories in here. 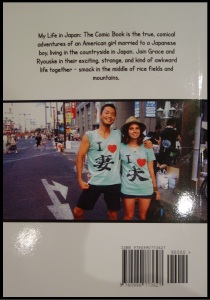 At the beginning of the book there is a Foreword by Ryosuke, it’s a couple of pages long and about how the two of them met. It’s a cute story and a nice introduction to the book, especially if you don’t know much about them or haven’t read the blog or seen the YouTube channel as it gives a bit of background. The comics inside build on this as they’re not all recent, some are from when they were first together up to the current day (when it was written anyway), so parts of the stories are getting used to the differences between the cultures of American and Japanese life as well as everyday life in Japan since they’ve been living together.

This may seem like an odd way to describe this but it’s an ideal waiting room book. I tend to spend quite a bit of time I waiting rooms so having books that you can have in your bag and read bits is always good. The fact that these make me smile and help me relax makes them even more ideal for this as it isn’t exactly the most relaxing situation sitting in a doctor’s waiting room! Having them on your kindle or iPad is just as good as I think pretty much most places with waiting rooms allow them, phones can be hit and miss but I often see people playing with tablets while they wait. It would also be a great book for travel or any situation where you might not want to get too involved in a story if you haven’t got long or you don’t know how long you have to read.

If you want to see the art style more you can go to the blog but I definitely think that buying the book is worth the price. I have Kindle versions of the first two on my iPad that are great for travel so I might be tempted to get one of the digital versions too as it does save space when packing. The images are really clear and the colours make them stand out. I think if you like light hearted comics on everyday life, want to read about some of the stories about everyday life in Japan or just want a comic book that will make you smile then this is definitely worth the price. Even if you have no interest in the Japanese side of the stories I think they’re the kind of everyday things that a lot of people would relate to anyway, at least the feelings even if not the actual situation.

The other three are also available on Amazon if you search Texan in Tokyo and are available in both paperback and digital versions. I did do a review on the first two here if you want to read it but I recommend all of them.