When I saw that Funko was doing a Doctor Who collection I wanted all of them, maybe I’ll get the rest later but as 10 is my favourite of the ones on the first wave he seemed like a good place to start. The prices for the Tenth Doctor figure seem to range from £8.99 to around £12 depending on where you find them but they seem to be available in most places I’ve found that sell Funkos as it’s still a recent range.

This figure is the Tenth Doctor figure based on the character played by David Tennant and is part of the Funk Pop Television range. I like the range available in this collection but I think it would have been nice to have the Ninth Doctor rather than the Fourth Doctor in there simply to have all the reboot ones in the first wave, though I do understand that Four played by Tom Baker is probably the most well known of the original series.

The box for this figure is the standard Funko Pop box with the window on the front and right one side that shows off the figure from both angles. I like how you can use these boxes for display if you want and they still look good and can be stacked on top of each other. There are cartoon images if the figure in an even more simplified version on the three sides as well as peeping over the edge of the top and the back has picture is all of the figures in the range. I do want them all but I’ll definitely be getting the Tardis, the Dalek and the Cyberman and probably all of the figures of the actual doctors. Its nice that they’ve included a couple of baddies if you wanted to do a display with them and Daleks and Cybermen are recognisable characters within the Doctor Who universe even to people who aren’t fans of the show but I hope they bring out all twelve of the doctors themselves. 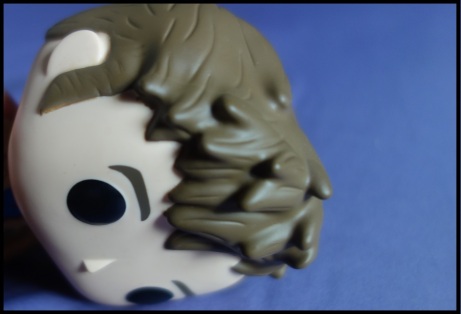 The figure itself is vynil and has a nice amount of detail. The majority of the different colours look like they’re the different colours of plastic in the mould rather than paint but there are some parts that are obvious paint jobs like the spots on the tie, the detail on the sonic screwdriver and the hair. I think this one has good detail in the pain work, it does add with the detail on the tie to make it closer to one of his more well recognised outfits. I really like the texture of his hair and sideburns, it’s part of the character of Ten that makes him more recognisable in the TV series and the hair ruffling in some episodes is part of the way David Tennant played him.

The pose for this figure us pretty much the same as all of the Funko figures I have, though he dies hold the sonic screwdriver, which I guess is what keeps the balance even with the exaggerated proportions. It would be nice for some other poses but it does mean it’s a more neutral pose for any display you want. 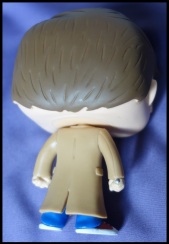 As a figure this one has pretty good balance, despite the large head it does stay upright by itself on a slight angle though it definitely needs a flat surface to stand up. As with all of the Funko Pop range this figure only has articulation on the head which does spin 360 degrees if you want it to so you cab have an exorcist style Doctor if you want.

Overall I am very happy with this figure. I do love all things Doctor Who which can be a good or bad things when it comes to things like this, I do like the fact there’s a Funko figure for a series I love but at the same time it can make me more critical of how it compares to the character on screen. I think this one is a good representation if Ten and it’s a good quality figure so I’m glad I have it as part if my collection.

I think this is a good figure for Doctor Who fans, or fans if David Tennant, as there aren’t that many Ten figures being produced recently so something new for Ten fans is always good. I think this collection in general looks good as far as the figures I know about in this wave so we’ll have to see if they vrubg out more. If you’re looking for a gift for a Doctor Who fan who likes things they can build a collection of or of this cute chibi-like style then I think something from this range would be a good idea. They look great on a desk or bookshelf as they’re definitely display figures. I don’t think they’d be that good for a really young Doctor Who fan but teenagers up would appreciate it I think, purely because there isn’t that much playability in these figures compared to all of the other Doctor Who range that has been released in recent years.