Publisher and year: Faber and Faber, 2009

I don’t know how popular QI is in other countries but in the UK it’s a popular TV show hosted by Stephen Fry (until the next series) with Alan Davies and other guests who answer questions about pretty much anything as long as it’s quite interesting. It’s pretty much a show full of questions that you think you know the answer to but normally the answer you think is right is wrong. The Book of General Ignorance (first published in 2006) is a book full of answers to these kinds of questions, quite a few of them taken straight from the show directly.

This Noticeably Stouter version of the Book of General Ignorance includes more of these questions, a different cover and a list of the episodes to the date of publication (the F series in the alphabet) but most of it is the same content. I bought it as part of a big lot of QI books on eBay so it probably cost be around £1 or less given the overall price and number of books and it’s one I’ve seen in second hand and charity shops a few times, both versions. It’s a sort of pick up and put down book or a coffee table book that’s a bit different and you can open any page at random and read something rather than having to read it in order.

As I have both of the versions of this book I’m going to review the newer one to start with and then do a bit of a comparison as there are definitely plusses for both versions over the other and then you can see them side by side.

The cover of the Stouter version (I’ll use that shorter name because it’s so long otherwise) is a photo of the set, not the best quality but it’s recognisable if you know who they are, I can recognise two of the three extra guests. It’s a fairly simple front cover and the title does stand out with the silver embossed text on the black background but to me it doesn’t stand out as a QI book, I’d think of something more unusual for a book linked with the show but it’s a nice enough cover for something sat on a table or in a book shelf. As it’s paperback it does get rather bent around the edges, I bought it second hand anyway so it wasn’t mint condition when I got it, and for some reason it reminds me a lot of the sort of novels you get in airports. Maybe it’s the text style on the back with the mainly white on black text on the plain background, I don’t know. It just has the feel of a book for holidays to me. It also has a very glossy finish, on the plus side it seems like anything spilled on it wipes off, on the minus it does show fingerprints and it’s very hard to photograph!

All content copyright John Lloyd, John Mitchinson for writing and Mr Bingo for illustrations. All images used for review purposes.

Inside the book is pretty standard but I do like the font, which may sound odd, for some reason it’s very easy on the eye and to read and I don’t think it’s the standard Times New Roman. The text for the questions is in a different font, larger and bold as well, so they stand out and there are some illustrations on some pages to go with the answers or the questions which are a cartoon style and go with the comedy style of the writing and the show. You also have the odd quote from the show with who said it, these are in the same font as the questions and separated off from the question they are related to by lines above and below so it’s obvious, you could just flip through the book and read the quotes if you felt like it.

There isn’t that much to say about the contents if you know the show, it’s full of the kinds of questions you get on there. Some examples include; “What did Darwin do to dead owls?”, “Can barnacles fly?”, Where do most tigers live?” and “What’s an atom?”. It covers a large range of subjects, there’s quite a bit of science, history, the arts and the more serious subjects but there are also questions on which animals make certain noises or more recent history and trends. All of the questions have proper answers, so they are educational in that you learn new things and often find out that what you thought was the answer is wrong, but they’re not written like an educational book. It’s definitely mainly there for entertainment and this version ties in more with the TV show than the original does so it has the jokes the comedians made which aren’t scripted and are often only slightly related to the question.

The additional extras in this book alongside the main bulk of the questions and answers are a Foreword by Stephen Fry, which is quite interesting to read but very short and Fo(u)r(e) Words by Alan Davies which is even shorter. There is also an introduction by John Lloyd that introduces the idea of the show, it’s also only two pages long, and for me the contents themselves are kind of an extra as there are so many questions in there it’s pretty long. It has every question included in the contents page alongside the page it appears on, with 281 (I counted them but apparently there are meant to be 280 so not sure how I got that wrong) it does take up a few pages. After the question and answers part of the book this version also includes a list of all of the episodes to the date of publication, the names of the guests and how many times they’d appeared by then as well as the scores for the episode, apart from the F series which I assume hadn’t aired at the time. As a fan of the show this bit was interesting to read, seeing how often certain people have been on and how often the audience was included in the scoring at the end though it won’t mean anything to people who don’t watch the show. 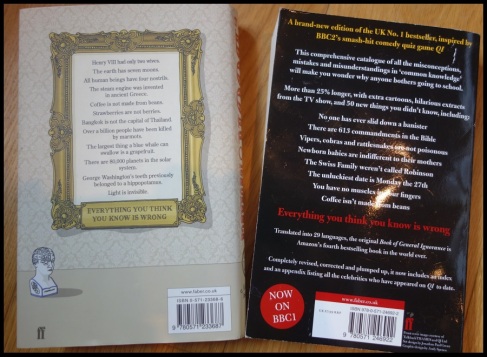 Now to compare this newer one with the original. I would say that the cover of the original is much better, to me. It’s a hardback with a cream dustcover with a cartoon of Alan Davies and Stephen Fry. The background is a matte finish but the title and the QI logo are a shiny finish which makes them stand out, I really like the mismatched font as well for the title. I really like the design of the back with the picture frame and this one is definitely the one I would go for if I wanted it to be one that was sat out on a table somewhere to pick up or for guests to pick up and flick through, it’s just got a nicer look to it. Also under the dustcover is a plain brown bound hardback with a classic gold writing on the spine with the name of the book and publishers so it would fit into any bookshelf looks wise.

The contents itself is the big selling point for the newer version with ‘26% more ignorant’ written on the front and the fact that there are 50 more questions (though by my counting I got 51, not sure how). These aren’t all stuck on the end, they’re mixed in with the others and I got lost part way through when I tried to work out which ones they were. As the dates of publication are three years apart I would guess that most of these new sections are going to be from the later series up to F. Another addition in this book is the quotes I mentioned before, they aren’t in the original and, apart from the title, Foreword and Four Words (though different a Four Words different words) there isn’t much to link the original version with the show going by contents. It’s just a book with a lot of well written and funny answers to questions you thought you knew the answers to. The newer version definitely ties it back to the TV show with the inclusion of the episodes and quotes.

Overall I think that there isn’t that much between them to make it worth buying the second version if you have the first unless you’re a big fan of the show. The extra fifty questions are probably ones you’ll have seen on the show anyway but they do add content to the original and the episode list at the end was interesting to read. I would say that, personally, I would probably still choose the original over the new one if I was to be buying it full price which sounds bad considering the whole ‘never judge a book by its cover’ idea but this is the kind of book that I would probably have out on a table or a side to read and that cover is more ‘QI’ to me and more the style I’d go for, plus I have a weakness for hardbacks with nice dustcovers.

If you don’t have either of them then it’s up to you, it depends what you go for and what you want the book for. If you want it as a quick read to pick up and put down or for travel then the paperback, newer version is probably the one to go for. If you want it to read every now and then and have it in a bookshelf or on display then I’d go for the original.

Whichever version you choose I think this is a great book to be able to dip in and out of. It’s the kind of book I think of as a good waiting room book, or the kind you can have out on the side near a printer or something that normally takes a while to do so you can pick it up, read a few facts while you’re stood there and then put it back down again. I think that if you like the kind of books that give you unusual facts or tell you how the answers most people consider true aren’t then this is worth picking up, even if you’re not a fan of the show itself or don’t know it, as it does it in a light hearted way but includes the facts and explains why the answer commonly thought of as right isn’t.

I have got a few of the QI books, they came in the bundle, and I would say this this is the best that I’ve read so far. I’m not sure if it’s the original, I have a feeling a couple of the others are older, but it’s the first that stands out as being true to the TV show and you can almost hear Stephen Fry saying the answers, or at least I can, which is always a bonus when it sits well with whatever franchise the book is based on.

If you’re a fan of the show this is definitely worth picking up, if you don’t know it but enjoy these kinds of books then I’d suggest giving the show a watch. If you’re in the UK it’s on pretty often so it’s hard to avoid really if you have Dave as it’s on there probably every night at the moment with episodes from one series or another.

Also, not that you’d probably need it but, the ISBN number for the original edition is 0-571-23368-6 if you want to use that to search for it anywhere.