Over the past few years I’ve tried quite a few different eye primers and, when I was getting some things from the Models Own store online I saw that they do them and, as they cost less than my current Urban Decay Primer Potion at £6.99 I wanted to see how it compared. I used to love the Elf Studio eyeshadow primer that came in a double ended thing with an eyeliner primer too I think but I haven’t been able to find it recently so I’ve been looking for a lower budget replacement to the UD.

There are different finished for their Eye Base eyeshadow primer, the one I chose is matte as I do like matte eyeshadows recently so I thought it might help to keep the finish better. They’re all £5.99 and available from the Models Own website as well as on Superdrug and Asos. I guess they’re probably available in most places that sell the Models Own makeup range but I don’t know of any others in the UK since Boots seems to have stopped. 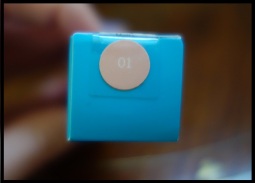 The outer card for this is very bright, I quite like the neon colours and it goes with the rest of the Models Own look. It has the information on ingredients and instructions on the side as well as a sticker on the end showing the colour and finish, this one is 01 matte, I’m not sure if the number means there are other colours in the matte finish or the matte is what makes it 01 and other finishes would be 02 etc.

The inner packaging is a lot plainer, the frosted plastic is really nice and, to me, makes it look more expensive. I’m not sure why I associate the frosted look with more expensive products but it’s a nice finish. The white writing stands out but I can see this packaging starting to look scruffy pretty quickly. It does wipe clean but the white lid means it’ll probably end up with makeup marks all over it, I guess that’s a problem with any colour but to me they stand out more on white.

The lid screws shut well and stays in place, I’ve had it in a bag and carried it in my pocket and it hasn’t started to come loose so I’d trust it for travel. The applicator on the end of the lid is nice, it holds a fair amount of the product and is easy to use to either apply on the back of your hand and then pick up the product to apply to your eyes with something else or directly onto your eye. I tend to go with applying these things on the back of my hand and then use my finger, I don’t know why it’s a habit I picked up I guess. As the product is pretty thin I find this also means it’s more controlled with this particular product, applying it directly onto my eye I had more than I wanted so it’s a case of getting used to this product more I think.

The primer itself is a lot thinner consistency wise than any other primer I’ve used before, at least than I can remember. I think it may be similar to the cheapest Elf one thickness wise maybe. You need very little of it, it spreads evenly and a thin layer is enough for it to remain tacky enough to grab the eyeshadow properly. It definitely isn’t the stickiest of primers when it dries but you don’t need to apply the eyeshadow quickly in fear of it become too dry and it not sticking, which I have found with some cheaper primers I tried in the past. Although the eyeshadow sticks I think the fact it’s tacky rather than sticky means it blends better than with some primers. You do sometimes get that line with the darker mattes which show where it was originally applied before you start blending but most colours blend well on top of it.

The colour of it appears slightly orange when you first apply but as you spread it it does become pretty sheer. There’s a hint of an orange or light brown colour but it gets covered up really easily with any eyeshadow and I’ve not had a problem with it affecting the overall finish or colour of them. I wouldn’t say that this is a particularly matte finish, despite its name, as it did not dry completely matte. It’s more matte than a lot of my eyeshadow primers in the past but it doesn’t have the flat look a lot of matte finish products leave. Either way it doesn’t matter much to me as it gets covered up and it leaves matte eyeshadows looking matte which was what I was hoping for.

I was impressed with how long this lasted, I have tried it five times with different products and the twice where I had my makeup on for more than eight hours, once for ten, it stayed put and no moving at all. I have tried it with loose pigments, mattes, shimmers and glitters. I wouldn’t recommend it for proper glitter just because it isn’t the most tacky finish but eyeshadows with a fair amount of glitter in them stayed put with very little fallout throughout the day and no more than the more expensive primers.

Overall I was very happy with this. To me it lasted as well as I want a primer to, it stuck all the brands I tried on it, from Elf to the more expensive ones I own like TheBalm, and survived as well as my current Urban Decay Primer Potion. I know that my eyelids do need a primer so that the products don’t slide, not matter what eyeshdaows I use they always move without it, so finding one that’s a lower budget option to my UD one is great.

I know that a while ago I used to hear a lot about Models Own, though mainly their nail varnishes, but I haven’t heard all that much about their makeup. I would say that so far I’ve been pretty happy with what I’ve seen so I’ll definitely be considering them in the future for other things. I don’t know which of their products are the best though so any that you guys have tried that you’d recommend or things to stay away from would be great to know.

2 thoughts on “Review: Models Own Eye Base Eyeshadow Primer in Matte”