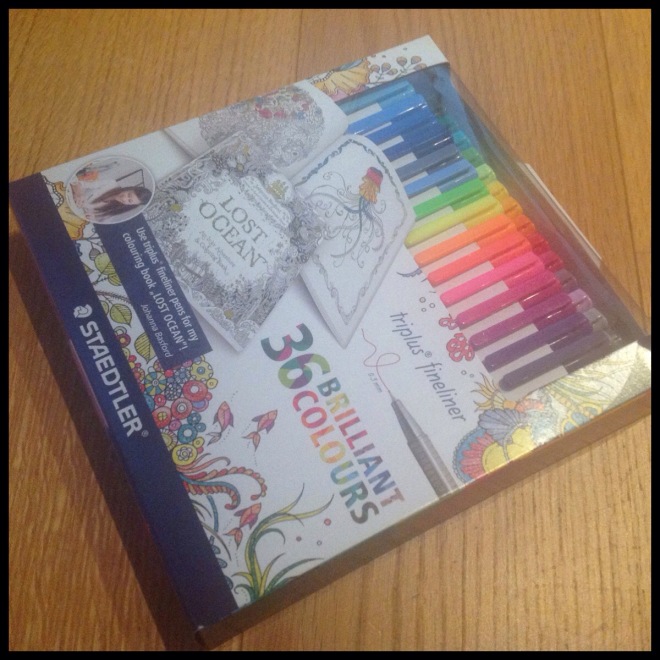 Having got more into adult colouring books and my old fine liners being nine or ten years old I thought it was time to get a new set with some fun new colours. My older set were Staedtler Triplus Fineliners so I decided to go with the same brand as I know how they work and liked them in the past. On a recent trip to The Range I saw this set of 36 for £19.99 which seemed like a good price as I’ve only found them online between £22-£25, though of course now I’ve bought them the price has gone down on Amazon so they’re around £18 there. It seems that the RRP is £42 which seems expensive and I don’t think anywhere is selling them for that price at the moment. 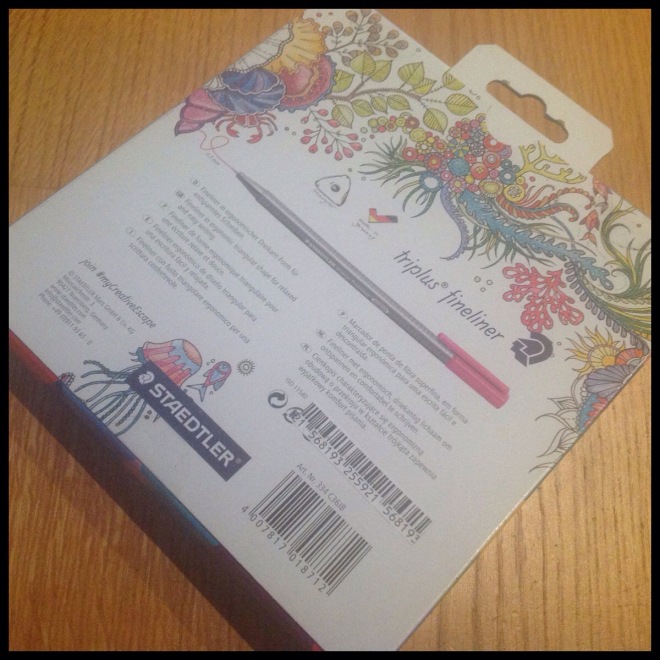 I’m one of those people who keeps pens in a mug on the desk rather than all colour coordinated so I’m not keeping it but I do like the box. I think there are going to be people who would pick this up over others because it’s associated with the Johanna Basford books and they’re definitely going with the adult colouring book audience with the parts on the back and front that look like they’ve coloured in the line art from one of them. They are arranged nice and neatly and it does make them easy to find the right colour, plus they do store well in a drawer amongst other things in the box. There is a tab at the top that you pull out and it moves the card inside that the pens are attached to so they’re easy to remove if you do keep the box, I only realised this after removing the top layer. 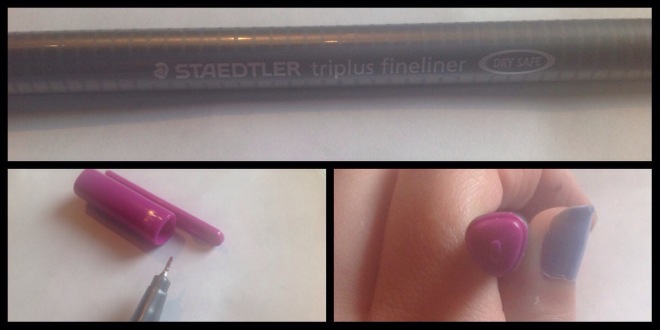 The pens themselves are a bit of an unusual shape for fine liners, they have a triangular shape, though it’s not so obvious on the part you ip as at the ends, it has rounded edges, and it does make them easy to hold comfortably for me. There is a bit of texture on the grip so there is some grip the but it’s not obvious, I’ve never had a problem with them slipping even after drawing with them for a while. The tips are 0.3mm so can do quite detailed work and they aren’t too soft. You can’t press down really hard as they do bend but with normal use I’ve not had any problems with them changing shape 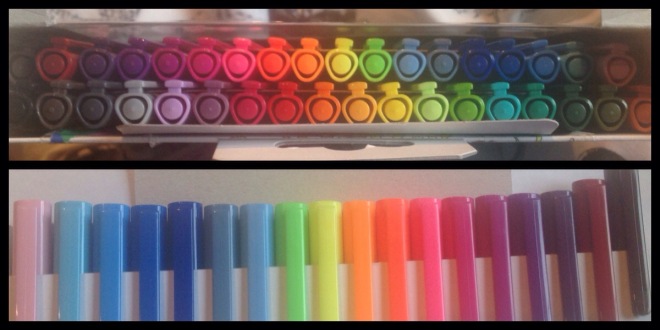 I love the range of colours in this set, there are so many bright colours and I like how many blues and purples there are though the are some of the colours that seem very close to each other and I don’t see the point in including both of them, for example some of the greys and the two more muted lavender purples. I have tried these on different papers and cards and they don’t really change all that much on most of them so the difference doesn’t become more obvious even on the whitest and least porous card. 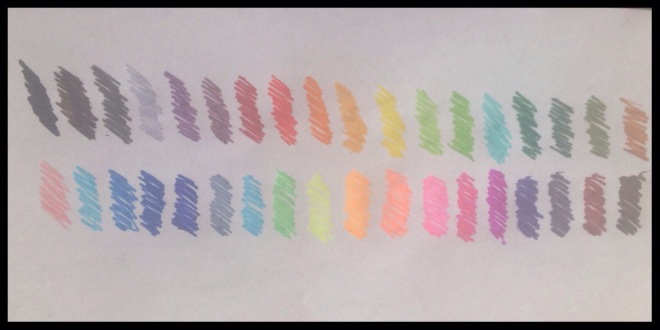 As I said before the main reason for me getting these is probably for colouring books, though I do use them regularly for card making, art and design work so have tried them on various other media and they’ve always worked well. For the adult colouring books I have had no problems with them bleeding or showing through on the next page with most of them, there are a couple of exceptions, like the Harry Potter ones, but those are made with thinner paper. The standard adult colouring book, thicker paper has no problems with these. Also the ink dries fairly quickly but if you go back over part that hasn’t dried yet it doesn’t normally leave an overlap mark so you get a nice smooth area of colour. I have found that, sometimes if the ink isn’t completely dry from one colour, it can bleed into the next but leave the area for a few minutes and go back to it and it’s fine so it doesn’t cause much of a delay if you want to do something quickly. 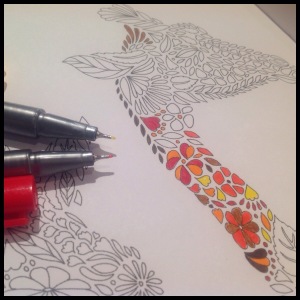 Overall I am very happy with these. They work as well as my old set did, have a larger range of colours and I know that they will last well as my others have been going years. I would definitely recommend these to anyone who wants some fine liners with the 0.3mm tip or for general art work if you want to be able to add some bright colour to details. I don’t know how well they work on a professional level but as someone who just enjoys using liners for drawing and colouring in they work great for me. If you have The Range near you then I’d recommend going in there and seeing if they have them in your local but there are plenty of other places that sell them, just not as cheap or they’re online with postage most of the time.