I really like a lot of the Retro Summer Collection, it’s all cream finish and bright colours that I think would look great with a tan, I know that these two make me look more tanned than I am. I haven’t really been following the new releases this year but I really like the look of a lot of them I saw from all the different brands so I might be tempted to get a few more at some point soon. These cost £5 each at Sally’s but the prices seem to vary in other stores, they seem to be available in a lot of places and Amazon has them at a good price at the moment in some of the online stores. 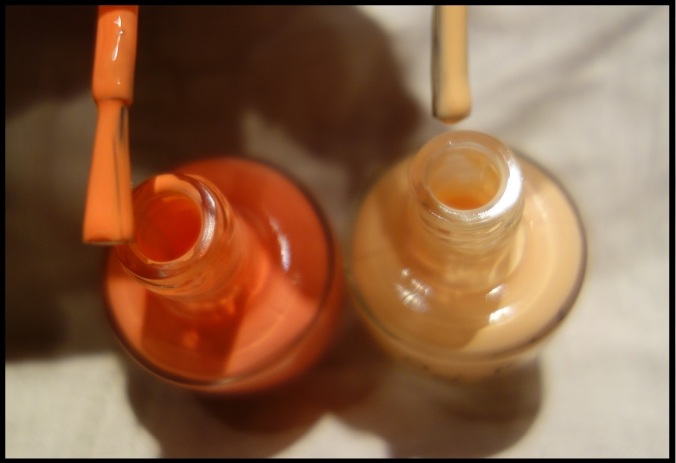 I’ll start with the review, I’ve had a bit of a play around with these, both as a normal nail varnish and with the ombre sponge application I tried. The bottles themselves are the standard OPI and I really like them, the brushes are a good size so you can cover the nails with two strokes normally, maybe three if you’re trying to be a bit more careful and don’t splay the end so much. The only thing with these bottles is how hard it is to get the last out when you’re near the end, it’s a case of tipping it up and letting it drip onto the brush I find, though I’ve rarely had an OPI polish that I’ve finished as I have too many colours already.

The two colours are pretty true to the life in the pictures, though I did find that I’m getting a Tan-gerine looks paler in the bottle than it does when it dries, not by much but it becomes more orange than the yellower colour it looks in the bottle. I’m Getting a Tan-gerine is a really nice pastel orange and the formula is pretty thin. It does need at least three coats, though I have ended up with five because of various failures with nail art and it still set quickly up to the final layer, which I sometimes find takes longer to set properly when there are a lot of layers underneath. The first layer or two were slightly streaky looking but layer three pretty much hid it, it does benefit from a fourth layer if you’re going to be doing anything that stains under your nails, at three I could see some black paint showing through when I was painting. As far as chipping goes it’s been four days and only the corner of my left thumb had chipped and that’s because I coat the nail so I’m happy with its staying power.

SPF XXX is a lot brighter, it’s not quite a true orange as it has the cream look and it has a hint of the thing that makes pastels look more muted is that makes sense. It’s almost a neon colour but not quite, it is great for showing off your tan though, and I don’t have much of one so I’d imagine it would look even better on darker skin. The formula seems the same as with I’m Getting a Tan-gerine, it doesn’t need more than three layers though due to the darker colour. I haven’t had this one on as long on its own but it didn’t chip in the two or three days it was on and as the formula is acting the same I would trust this one to last for me too.

Overall I really like these two nail varnishes, I do get on with OPI for my nails anyway and they’re a great combination of colours. If you want some nice, bright colours that would show off your tan than I’d say look at the collection. I think there are quite a few colours that are almost in pairs, like they’re a similar colour but one is slightly darker than the other so they would be perfect for an ombre look or for a contrast nail that adds a bit of another colour while staying in the same range.

The aftermath, the sponge has been cleaned and it really did work well but I think I might get some cheaper ones for next time

The nail art look I went for, as I said, uses an ombre as the base which I have never done before. I didn’t really have any sponges to use for it so I ended up using my Boots Precision Blending Sponge, which is probably a bit of a waste at £2.50 considering the price of others but it really did the job well and was great with the size and shape of the smaller end. I have also cleaned off the end with nail varnish remover and so far no problems, I’ll see what it acts like next time I go to use it with makeup though.

The first thing I did was a base of I’m Getting a Tan-gerine, which I did leave by itself for a few days as I couldn’t decide how to go about the nail art and didn’t want to ruin it all, plus it’s a good summer colour anyway and I haven’t had plain nails in a while.

I tried a couple of ways to get the ombre look, the first idea was to mix the two on a piece of plastic (I used the box of the makeup sponge I reviewed the other day) and get the gradient look then use the sponge a bit like a stamper in a nail stamp kit and try to put it on my nail like that. This totally failed, the sponge just absorbed it all and I ended up with a really fain ombre on my nails. The second plan was the one that worked, though it did take quite a bit longer and probably made more mess. I think this is probably the standard way of doing it but I kept putting a blob of the SPF XX on the plastic and then getting a small amount on the sponge and building it up from the tip of the nail down so there was less of the nail varnish on by the time it was half way down my nail. I did end up covering too much of my nail this way a few times so I had to keep adding more of the I’m Getting a Tan-gerine but by the end it looked ok. As it was such a thin layer with each application it dried very quickly and became tacky so at this stage it was a pretty rough surface. I added a top coat of the Ciate Speed Coat and it smoothed it all out.

Taken with a flash

I was planning on leaving it like that but today I decided to add some actual designs on it. I ended up looking on Google for summer silhouettes, I was going to do palm trees, but then I saw some with grass and butterflies which I thought would look really nice, and be a lot easier to draw. It only took about five minutes, maybe six, to do all of the lines and the bugs on it so I think it’s the quickest nail art just going with the lines that I have ever done. I used my Rio Professional Nail Art Pen in black, it’s available in both the original and the neon sets and I love these as they give the two options with the brush and the pen tip. To get the grass it’s just a lot of fast lines with the pen part of the nail art pens, it doesn’t matter how light they get or if there’s a blob at the bottom where it starts as grass gets thinner anyway. Then to do the flowers on some of the longer ones it’s a few more lines, it doesn’t matter how neat they are and some of the more blobby ones look pretty good to me as well, even if that wasn’t the original idea. The butterflies and dragonflies were also just lines, I didn’t go into much detail as they’re so small so just some triangles for wings for the butterflies and the dragonfly was a line for the body then a small diagonal cross part way down for the four wings. I’m not sure how well I’m explaining that but hopefully you can see it.

In the end I’m pretty happy with how this turned out. I didn’t realise how messy the ombre would be so I’d definitely recommend some kind of coat of clear nail varnish on the skin so you can just peal it off quickly, though it does come off with soap and water after a day or two even without you scrubbing too much, it just means it looks tidier sooner. One thing I did find is how oddly satisfying it is to peel off the nail varnish on my fingers, it’s like PVA glue when you’re at school. I haven’t noticed it before, maybe because I don’t normally go so far off the nail, this really did get everywhere.