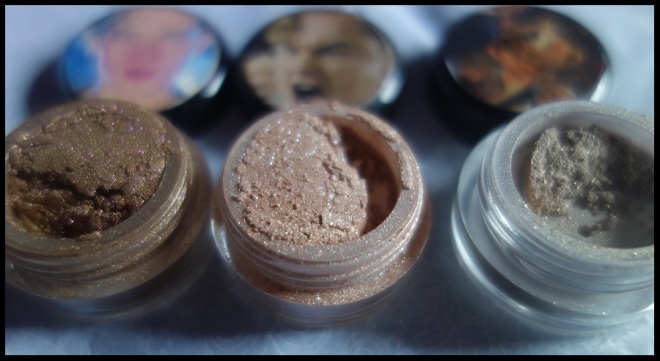 For the past three years Shiro Cosmetics has released Leo DiCaprio and Oscar themed eyeshadows though the previous years they were only available for a month as a monthly colour. This year, however, all three have been released in one mii set where you can follow the years of no Oscars and the year when he finally won one. I hope they carry on with this series next year, not sure what they’d call it but anyway.

Shiro Cosmetics is an indie makeup brand who do lip products and powder based face and eyeshadow products which all have a geeky theme, or Nic Cage related. There are monthly colours that appear for a limited time so if you like it make sure you grab it while you can. Some do appear again and there’s a greatest hits sort of area that has some in from the past but the general rule is that they don’t reappear.

I love the packaging for these eyeshadows, the labels are all different for the colours of the month ones and a lot of the more recent collections have individual labels for the different colours in the theme. They come in a clear 5 gram jar with a sifter in it and a black lid so you can see the colour of the eyeshadow, though the sticker on the base with the name and ingredients does mean you have to store them on their side or pick them up until you’re familiar with the labels or names. The lids for these are pretty good though I have had some that are looser so you have to know which ones are safe for travel. In these three Still No Oscar for Leo DiCaprio tends to loosen itself in my makeup bag so I always check and tighten it if it needs it, the other two have been fine.

I do love the formula for Shiro Cosmetics, they are really pigmented and last so well on a primer, though I do definitely need the extra base to make it stick as without it it’s obviously fading and moving after an hour. There is always a lot of glitter so you have to be careful with fallout but I’ve found that tapping the brush and applying under eye concealer afterwards reduces the amount stuck on my face as once it’s on there it takes a while for any to obviously come off. After five hours I’ve had a bit of sparkle reappear but it’s just a hint. They do blend pretty well but, again, the shimmer gets everywhere if you do so I’d go with pat it on and try to blend as little as possible.

The swatches show the top half with primer and the bottom half without, though when first applied there is very little difference once the primer has set. To start with the base shows through a bit more and makes it look darker but once the primer is set it lightens up and it holds it in place really well. I’d say a stickier base is best for these, I haven’t tried a glitter base for them but I think that would work really well.

No Oscar for Leo DiCaprio – Bronze or mid brown shimmery base with gold, pink, purple and shimmer glitter particles. Great coverage and it looks more bronze to the side but darker straight on.

Still No Oscar for Leo DiCaprio – Champagne shimmery base, peachy and pretty pale with a silver, gold, champagne and holographic shimmer in it. Very sparkly and a great all over lid colour, from the side the shimmer makes it a more silver colour

All three of these have great pigmentation and I’ve used both of the first two many times over the past year or two that I’ve owned them. I think Still No Oscar for Leo DiCaprio is my go to for all over lid colour for something with a bit of sparkle for any occasion. I think that if you like really sparkly colours and something to add a bit of glitter to a neutral look then these are a great set to get as you have a cool light shade, a warmer one and then a slightly darker crease colour.

I would definitely recommend these three, actually I recommend any of the Shiro Cosmetics eyeshadows and I think they have pretty much any colour covered as long as you like sparkle. I have done reviews of a couple of the other collections and I recently bought a couple of the lip products, a blush, a contour and some other eyeshadows that are still on the store so I will do a general review of all of them, I just thought these deserved their own post as they’re still a mini collection on the site.

One thought on “Review: Shiro Cosmetics Three Years of the Oscar Status of Leo DiCaprio”