It’s been a while since I did aa book review as I’ve not been reading much but I recently bought this colouring book and I really like it. Colouring has never been my favourite bit of art so I stayed away from the adult colouring book craze when it started, but after actually getting one and trying it I find it surprisingly relaxing.

This adult colouring book is based around the plays of Shakespeare, or some of them, the fact it’s only a small number might mean there could be more in the future though I don’t know. The Good Wives and Warriors illustrators are actually Becky Bolton and Louise Chappell and there’s also Alice in Wonderland and Charles Dickens themed books in the series. I really like this idea of having colouring books based on books or series that are already known. 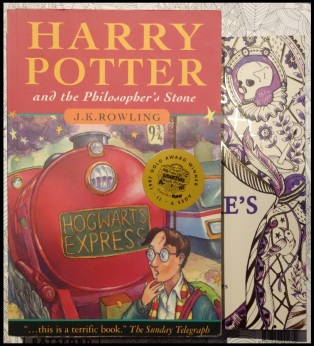 One of the main reasons I wanted to get one of these books, apart from the Shakespeare theme, is the size of the book itself. I have photographed it next to both a Harry Potter book and another standard sized colouring book as I think a lot of people will have a general idea of the sizes of them to see the scale. It’s a good size to throw in your bag for travel or if you like to colour in your spare time during the day.

I really like the style of these covers, they have the black and white line art and then use a highlight colour, in this case purple, to fill in parts of the picture. It also has some lines done in silver that adds something to the final look. I like how the purple in this one has been done in a way that looks like it’s been coloured in with different art supplies that the buyer would use. There are some parts that look like they’d be done in pencil, fine liner and maybe felt tip pen, so it gives you an idea of ways to colour it in rather than just filling it all in. 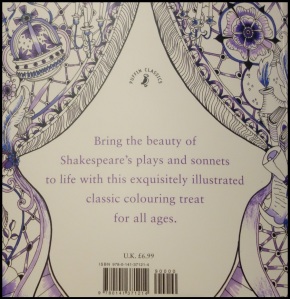 The book itself is 96 pages of pictures, most of them are double page pictures or at least have the same play on both if the image doesn’t cover the two. Even the title and end page have the lineart for you to colour in so you don’t have any pages in here without art in. The pictures are all themed to do with the quote or play that’s on a page, though very few have actually got a picture of a stage or the characters in them which I know is a reason it has received some bad reviews. To be honest for me the pictures of birds and snakes or the woods are probably more fun to colour in than a picture of a character on a stage but if that’s what you’re looking for in a Shakespeare colouring book then this wouldn’t be for you. I do especially like the ‘to be or not to be’ page that has a bee to replace the word be in there.

I went through the book and looked at all of the plays in it so thought I’d do a list so you know which have more than others as there are definitely some that have a larger share of pages. Some of them don’t have a quote in but I’m guessing which play they’re for because of the plays before or after and there are a few pages at the beginning that are generic Shakespeare ones like a picture of him and one of his birthplace. The plays and number of pages for each are: As You Like It (1 single), Romeo and Juliet (7 double), The Tempest (6 double), Hamlet (4 double), The Merchant of Venice (4 double), A Midsummer Night’s Dream (7 double), The Comedy of Errors (2 double), Macbeth (5 double), Anthony and Cleopatra (3 double), Sonnet 18 (1 double), Richard III (2 double), King Lear (1 double), Julius Caesar (1 double), Twelfth Night (1 double), Cymbeline (1 double) and All’s Well that Ends Well (1 single).

The images themselves are a mix of just plain pictures and ones which have parts of the image made up of smaller patterns like you get inn a lot of adult colouring books, for example there is one where there is a quote about Bottom from a Midsummer Night’s Dream and the donkey in the picture the stage is made of patterns and flowers. There are some images which have larger parts to colour, like the water in a Merchant of Venice picture or the sky in some others but the majority have the larger expanses broken up. There are quite a few where there’s a fair amount of black ink filling in the sky for the night which does save you time with just colouring in black all the time and makes the colours really stand out on it which I like.

The paper for this is really nice quality, it has that parchment look and art paper feel so it’s pretty thick and it’s an off white colour. I have tried it with both pencils and my fine liners and I have to say that I think this is the best colouring book I have for fine liners. It does bleed slightly but the thickness of the lines means it doesn’t bleed into each other unless you almost go into the next colour when it’s still not completely dry. It doesn’t show through to the next page, I even went over with a dark purple multiple times and nothing, but this may be different with other brands of marker, I have Staedtler ones.

The pencils worked as well as normal and the art paper does mean that it seems to colour more evenly than with a lot of thinner papers but I seemed to find that it was a lot harder to get a really bold colour with this, it didn’t seem to want to even when I pressed hard with some of them. The amount of detail in some of the images also makes it harder to use a pencil for me, you’d have to make sure it’s really sharp and keep on sharpening it so you don’t go over the lines.

Overall I’d say it’s better for fine liners than pencil and it really does look good with them. It’s a great little colouring book and it’s made me want the others in the series as I like the paper quality, the images themselves and how they fit the theme and the fact that it’s a smaller book also appeals to me. I think if you like Shakespeare, or like the idea of colouring in images of a wide range of ideas like ships, dragons, unicorns, woods, animals and some skulls and skeletons thrown in there then this is a good one to look at. It costs £6.99 full price but it’ll probably be available around for less soon though I haven’t seen this range in actual book shops near me so it may be one to buy online. This is definitely a book I’ll be happily colouring in and the size of the images does mean it’s a good one to pick up and put down or finish one picture in a shorter time.

3 thoughts on “Book Review: Escape to Shakespeare’s World – A Colouring-book Adventure by Good Wives and Warriors”