I did originally try to list the places I bought from in this post as I thought I’d put all my most recent purchases in one place but the title got ridiculously long. I did originally think of doing one or two of these separately but then I realised they were all arriving near each other and it would mean it was later for me to post any of the reviews and I’m really looking forward to some of these products. This post has a combination of orders from Amazon, ASOS and Superdrug but there’s also a couple of things I won on the village fete tombola that I thought I’d throw in here as well.

As you can see from the photo this post covers a lot of different things, most of them I’ll be posting about on here some time in the near future. Most of them are beauty products but there’s some DVDs and books thrown in there too. 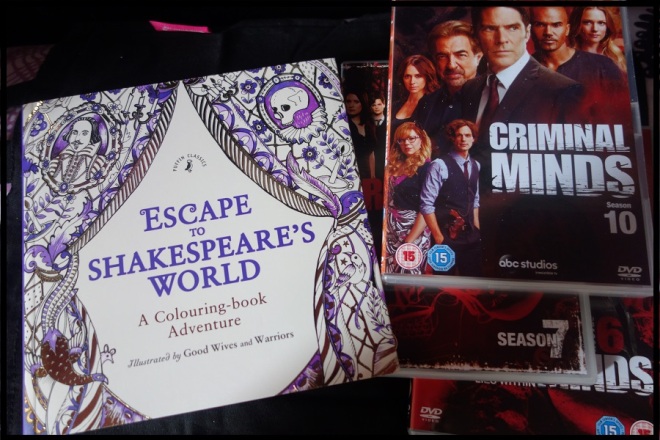 The first one to arrive was my Amazon.co.uk order which I mainly made for the Shakespeare colouring book. It’s the Escape to Shakespeare’s World: A Colouring Book Adventure and costs £5.24 and is by a couple of illustrators that go by Good Wives and Warriors. They have a series of books based on Puffin Classics and they’re all slightly smaller than the average adult colouring book so I think it’ll be a great one for travel or if you like colouring on the train or something like that. The other themes I know of are a Dickens style Christmas one and an Alice in Wonderland and I think I want them both.

The Criminal Minds Sixth Series, Seventh Series and Tenth Series DVDs now complete my collection of the series so far. I love this show and in the past it’s been one of my go to ones for on days when I want to just relax and watch something but I’d managed to miss series six and seven somehow when I was buying them. I think it’s a great crime show with something a bit different from all the CSIs out there and was the first of the recent American crime series I got into. 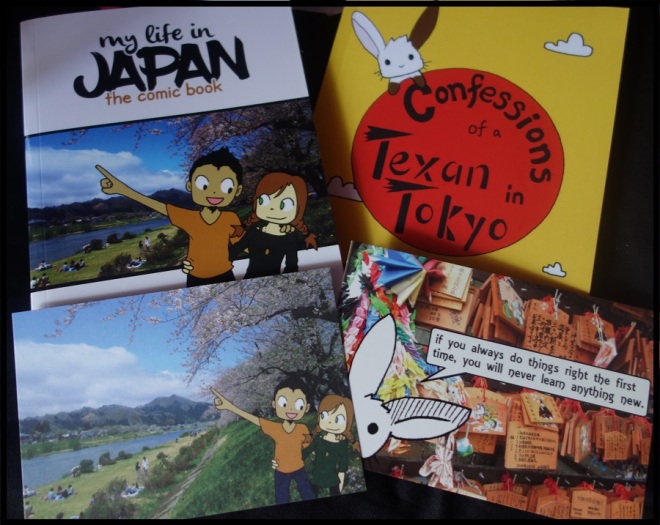 The two comic books I bought when there was a Kickstarter as Grace Buchele Mineta, who writes the Texan in Tokyo blog and makes videos on the YouTube channel with her husband, was self publishing a book of comic strips in colour. The colour one is called My Life in Japan and the other, the third book she has released, is called Confessions of a Texan in Tokyo and is available to buy now. One of the options was to get another of her books at the same time so I went for that as I haven’t got a physical copy of the third one. I have done a review of the first two and these are similar, I’ll do a proper post on them as I think that the colour one is going to be available on Etsy at some point with a limited number. It’s a great book to pick up and put down, read a bit and carry around in your bag and I really like the style of her drawings so I’ve taken the other two to hospital waiting rooms many times.

My ASOS buys were fairly small but came in a massive box. I mainly bought from them because of the hair clips, I really like the ones like the bigger flowers in the set as they hold my hair well when sometimes it’s too thick for the hair grip styles and I find it very hard to find any with that style back in nice designs. If you guys know anywhere to get them in the UK I’d love to hear from you as I’d like some others too. This set is a six piece set and is the Vintage Flower Hair Clips, at the moment they’re in the sale for £5.50 but are £8 full price here. I bought the Orelia Star Hair Clip as something to try, though my hair is a bit thick for it it will hold parts of my fringe back so I’m happy. It’s hard to tell in the photos but it is a gold colour rather than the silver it looks in some lights. It does have a little bobble that means it all clips together and holds in place so it should stay well once it’s in there. This cost £5 but I don’t think I’d recommend it as it’s a bit flimsy feeling, maybe if you have thinner hair it would work well though.

This Oh K! Cosmetic Sponge has probably got the cutest packaging of any makeup tool I have seen. It costs £6 so about middle of the range when it comes to beauty blender type sponges but I hadn’t heard of this brand before and it’s a different shape to the others I had so I thought I’d give it a go. I seem to have started a bit of a collection of these things but I do think they work well, we’ll just have to see how this one compares to the others.

The last of the things from ASOS was a Ciate Fast Dry Top Coat, it’s supposed to be a quick dry one but I wasn’t that bothered about that. I just wanted to get a different one as my Seche Vite just peals all the time if I use it on nail art over gel nails, so far this one doesn’t have that problem so it’s doing what I wanted it to. It costs £12, I think anyway as it seems to have disappeared off the ASOS website. I like Ciate in general when it comes to nail varnish and it always works for me so I don’t mind spending more than I would on most drugstore price range ones. 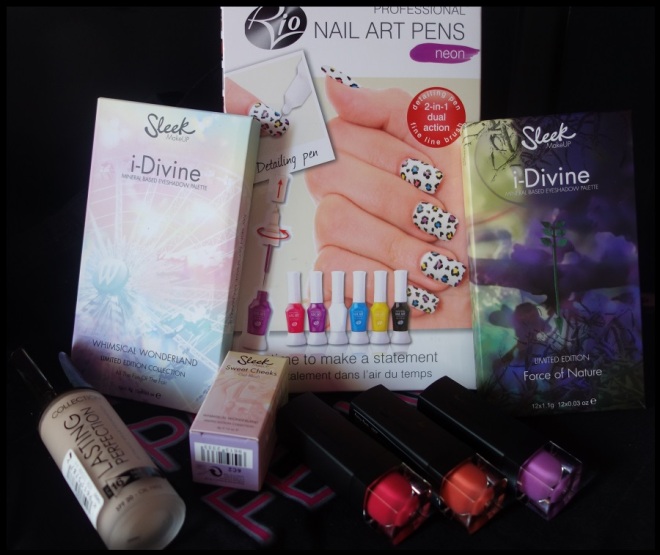 I spent the most on the Superdrug website, I found the most recent limited edition Sleek collection and ended up buying a few things from it and the Force of Nature Palette (£8.99) which I had somehow missed even though I realise it must have been released last Autumn looking at some blog posts on it. The Force of Nature palette is all mattes, with one that appears to have shimmer but I don’t think it’s meant to, and in really nice colours. I can’t wait to play around with it as it sounds promising from what I’ve read on it.

The new Whimsical Wonderland collection from Sleek has three gel blushes (£5.49), three Lip VIPs (£5.49) and an eyeshadow palette called the All the Fun of the Fair palette (£8.99). At the moment all of these are in a two for £10 offer which is great if you get the palette, there are a few other palettes in there too so to get the most money off then two of them is the best way. The palette is full of shimmery and matte pastels and nudes and I think it’ll be a great one for people who like the idea of some colour but nothing too dramatic, or just for a nice pastel summery look. The gel blushes look a bit overwhelming in the stick but they’re a lot lighter when you apply them. I went for Tomfoolery which looks like a dark purple, there’s also a more coral and a pink. These are similar colours to the Lip VIPs which has a slightly pastel purple or magenta called Big Shot, a more coral one called Fancy Pants and a bright pink in Hot Tottie. I like the others I have in this formula and really like these colours so I’m definitely going to be playing around with these and seeing how they turn out.

I posted about the Rio Professional Nail Art Pens in my monthly favourites and I found that they do other sets so I got the neon one which is £24.99 for six colours. I really like the purple in this but also I am running a bit low on the black and white and, as they’re in the collection, it means I get them along with other colours I don’t already own. The other colours are yellow, pink, light blue and the light purple I already said about. I have seen a metallic set also on Superdrug but there’s a pastel one on eBay that I haven’t seen anywhere else, I might get both of them as then I have most of the colours covered and I do love this formula. I’ll definitely do a post on these as I think they’re worth checking out if you like nail art.

The last thing I got in Superdrug is a Collection foundation, the Lasting Perfection in Porcelain, which costs £6.99. I’ve tried this on the back of my hand in stores and really liked the look of it but they never seemed to have it in my shade so I took a risk and ordered it as I need one with SPF for in the summer and this has SPF 20 in there as well as being a formula that my skin seems to get on OK with. So far it seems a good match to my skin but I’ve only been trying it on my hand so we’ll have to see when it comes to actually using it on my face. It does last well from what I can tell and not too orange which is always good when it comes to foundation as I’ve found in the past most don’t seem to do them as pale as I need them.

One bonus thing from Superdrug is when you spent £15 on makeup then you got a tote bag with a #THAT PARTY FEELING text on the front in bright pink. It’s ok but I won’t be using it outside of home as it’s not as big as most of the shopping bags I have and it’s not really a design a like but it seems well made and strong enough. 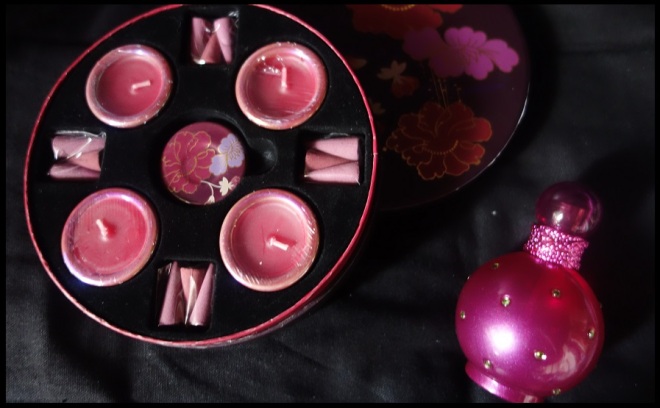 The last to things I’m putting in here aren’t really purchases, I got them in the village fete tombola, but I do like them so thought I’d include them anyway. The Britney Spears perfume Fantasy is one I’ve smelled and liked before but never enough to pay full price for it but having won it for a few pounds worth of tickets I’ll definitely be wearing it. I love anything with lychee in and that really stands out on my skin and it’s a nice, light summery scent so I’ll be wearing it a bit this year. The bottle is a bit too pink for me but that doesn’t really matter as I don’t keep my perfumes out so the light doesn’t react and change the scent. The other thing is a small candle and incense set that smells nice, it’s a sort of cherry berry scent but I have no idea of the make or the name as it doesn’t have a label on it. I’ll be giving it a try and if nothing else the little plate thing for the incense is nice for me to use with my other cones and the little pots with the candles in are pretty.

2 thoughts on “Recent Purchases: All the Things”