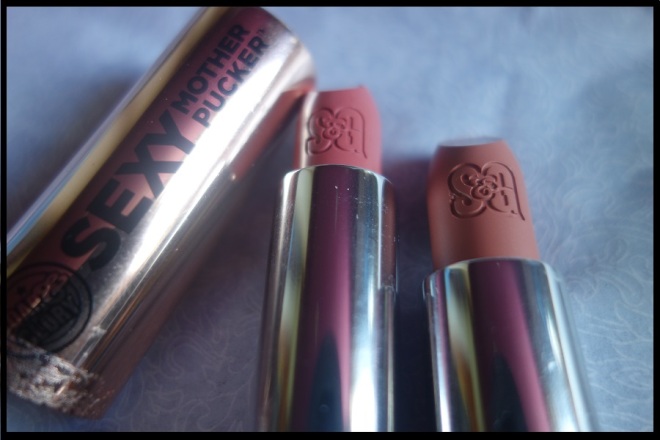 I haven’t seen the Soap and Glory Sexy Mother Pucker collections until last week so I think they’re a fairly new release. There’s three separate collections, one for pinks, one of reds and one that’s all nude colours. Each collection has eight colours in it and these include three different finishes; satin, matte and shiny. I have a feeling I will be getting more of these but to start with I got two from the Nudes Collection, a matte called Super Nude and a shiny finish called Barely Pinking. Unfortunately the first time I opened the Super Nude I managed to drop it and the tip broke before I could photograph or use it, don’t you just hate it when that happens?

These lipsticks are similar to the Sexy Mother Pucker lipsticks that have been available for a while, I think each of these finishes was available too. At the moment these are included in the buy one get one half price offer at Boots and they cost £9 each. I’ve only had these for a few days but I’ve given each of them a proper try with eating and drinking and seeing how well they last.

The packaging for these is different depending on the collection so you get a red metallic finish for the reds, a pink for the pinks and a rose gold looking lipstick tube for the nudes collection. I really like the look of the tube but one thing that’s really annoying, to be anyway, is how the sticky seal to show it hasn’t been opened and the ingredients and barcode stickers leave a mess on the tube. I was going to take off the ingredients sticker so it was rose gold all the way round but when I started it was leaving a sticky mess so I left it for now. I’ll probably have to try washing it with soap or something scrubby as I do want them to be plain rose gold.

The tube is made of plastic, it’s pretty thick and sturdy so won’t get dented or broken if you drop it and I think it’d protect the lipstick inside pretty well. It clicks shut really well and doesn’t come off when you don’t want it to so I think it’d be safe in a bag or for travel. I like the look of the rose gold with the black writing on it but it is very shiny and hard to photograph so it seems to attract fingerprints or marks which might annoy some people. The inner part of the packaging with the twist up for the lipstick itself is mainly silver, you can easily see the difference between the two parts you have to hold and twist because of the colour difference and it is nice and smooth to twist up and holds it in place when you use it so you don’t have to worry about it pressing back down when you apply it.

As I have the two different finishes I gave them both a go with eating and drinking and sow how long they’d last, I have to say I’m definitely more impressed with the matte over the shiny in some ways but it did have a similar problem to a lot of mattes in that it was a bit drying.

The first one I tried was Barely Pinking, the shiny finish lipstick, which is probably one of the pinker ones in the nudes collection, it’s a warm neutral, almost dusty rose colour with tiny shimmer particles, they’re not big enough to look like shimmer, more the size you get in products that give you a dewy finish. I love the formula and how it applies, it feels really creamy and does leave an almost glossy looking finish. You do have to blot it a bit for it to last at all which does remove some of the shine but the tiny shimmer particles do keep it looking moisturised. Of the two this one was slightly more sheer than the matte, I did feel like it needed a couple of layers to get its true colour but it does build up nicely and it didn’t melt or run even with more layers.

I did find it took a while for this lipstick to set or dry, I tried drinking within ten minutes and it left a bit mark on the glass, a few attempts and the mark had faded but there was still transfer. However I did find that, even with the transfer, there was still quite a bit of colour on my lips. As far as long lasting I would say it lasted three hours before I felt like I needed to reapply it, there was still a hint of the colour but it looked a bit like when you use a lip stain with that tint left over rather than a lipstick. I don’t mind having to reapply it after that amount of time, it is a nice looking lipstick and all the time I was wearing it my lips felt moisturised, I didn’t have to use a balm afterwards or between applications which is unusual for me and lipsticks. I’d say it’s a nice one that’s ok for going out for drinks or a meal but not one if you’re bothered by transfer as it took a while to stop transferring onto anything that touched my lips.

The matte I chose, Super Nude, is a good nude colour if you have darker skin, it’s a warm nude and has a slight orangey hint to me. As my skin is pale it’s a nice neutral colour but not a nude, I still really like the look of it though. This is another really nice lipstick to apply, it’s really soft and buttery and melts rather than dragging on your lips. The matte finish is good, it does need to be blotted to get a true matte look as it seemed to have a tiny bit of sheen without. It took ages to dry if I didn’t blot it, twenty minutes after application it still had the sheen until I blotted it. This is a pretty pigmented lipstick, one layer was enough for my lips but you might want to build it up more if you have darker skin or want a bolder look, it does build up well as long as you blot between layers, otherwise it seems to slip more.

As far as transfer goes this one was a lot better than the shiny finish, it di transfer a fair amount when I tried it without blotting but when I did blot it I think the first time I had a drink there was some transfer but the second time there was barely anything, a faint line more than a lip mark. Although it didn’t seem to transfer it seemed to lose its colour quite a bit, without eating or drinking it lasted about four hours but with eating or drinking I wanted to apply it again within two, I think it’ when it gets wet it loses some of its staying power. One thing with this one is it does feel drying, it’s not a lipstick that I could feel on my lips when I wore it, if that makes sense, but they did feel drier and one time I forgot I was wearing it and put some lip balm on which ended up with a messy lip balm. It didn’t mess up the lipstick though and it did last well even with that so maybe using balm at the same time is the way to go. I think this would be a good lipstick for any occasion really, as long as you don’t mind reapplying it if you’re eating or drinking a lot, it’s more losing the colour on your lips than it transferring onto anything else.

One thing that does confuse me with these, with Soap and Glory using the Sexy Mother Pucker branding on them, is that I did not get any plumping at all with them. I know they used to have the other lipsticks separate to the Sexy Mother Pucker range and this was for the plumping effect products only but it seems that everything lip related is classed as it now. Maybe it’s just me, maybe it did make other people’s lips tingle and get that slight plumping effect but it just felt like a normal lipstick.

Overall I am happy with both of these and will definitely be wearing them. I think I’ll be getting more in these collections as, although they may not perform as some people would want them to it’s quite rare to find a lipstick that works on my lips and does not feel like I have anything on. I hate that feeling of being able to tell I have lipstick on so these are great for me and if that’s a problem you have too these may be worth checking out, at least having a look in stores if you can.

I think that for the price, especially in the offer, these are good lipsticks and they’re in a good range of colours from a light shimmery nude to a dark berry red if you look in the reds and pinks too. I like that they’re cruelty free and the finishes are obviously different and last reasonably well. I think on an average day, going out shopping or hanging out with friends, they would last well enough for me. I don’t think I’ve ever come across a lip product that lasts a whole day without reapplying so it’s not a big thing to have it in my bag and reapply it now and then.