Before this year I didn’t really buy anything in Holland and Barrett, but after finding the Dr Organic Snail gel range I’ve ended up trying other things from there more. I did a small order, mainly to replace the Dr Organic things but I saw some other bits I wanted to try, I did manage to forget the face masks I originally meant to order as they have some really nice sounding ones on there.

Apart from the two Dr Organic things I haven’t tried any of these before and I haven’t actually heard of any of them before doing the search on the Holland and Barrett site. A while ago I did a pot about travel sickness and someone recommended the ginger sweets from Holland and Barrett so I got a pack of them, the chewy ones as they were the cheapest and said they’re for travel sickness. I also thought I’d give some of the hair care products as I’ve always had a flaky scalp and will always try a new thing for that as most of the others don’t seem to work at all. The couple of beauty products are ones I’ve never heard of seen before but I was intrigued by the one and am trying to find a good foundation. It’s a bit of a mix of everything in here. 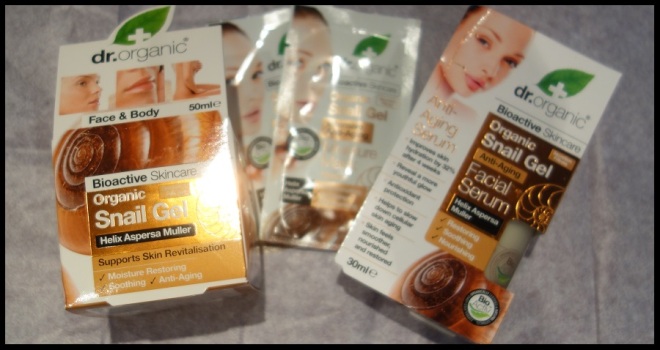 The first two I got are the Dr Organic Snail Gel Facial Serum and Dr Organic Snail Gel, I’ve done reviews on both of these before (click the links in bold above) and have found that they work really well for my skin as it is at the moment so they’ve become must have products even though they do cost more than I would normally spend on skin care. The Snail Gel Facial Serum costs £18.99 for the 30ml bottle and the original Snail Gel is £20.99 and this one works for face and body without being too greasy for my face which seems to be pretty rare for those products meant for both. All of these Snail Gel products are in a better than half price offer at the moment so they cost half of the prices I have listed, they’re in and out of offers so often I decided to leave the original price in here. It’s worth waiting for them to be in this kind of offer before buying them.

I did also get a couple of sachets of the Dr Organic Snail Gel Mask, I thought as the other things work so well for me these would be worth trying. I’m a fan of face masks in general and these are £1.99 each, which is quite expensive for a Dr Organic face mask when their tubes in other ranges aren’t £10 and have a lot of uses in them. I guess it’s the snail gel element to it, it does tend to make a lot of products more expensive in any brand. Dr Organic is cruelty free and I like their products in a lot of the different ranges so I’m looking forward to trying these, I’ll do a review of them when I have.

There are two healthcare kind of things I got, the one I didn’t photograph as I forgot I had it which is the Fitness Pharma Q10 + Omega 3 capsules, these are both things I was recommended for ME years ago. I used to have some Bassett’s multivitamin type chew that had the Co-Q10 in but they seem to have stopped doing them so I’m giving these a go, they cost £9.99 for a box of 60 and you’re meant to take two a day so it’s thirty days’ worth. The Gin Gins Chewy Ginger Candy is the one that I think I was recommended in a previous post for travel sickness. It says they’re good for nausea in general so they’ll be handy to try next time I feel nauseous. I have tried one today, just to see what they’re like, and it tasted nice, quite strong and spicy like real ginger products do and the individually wrapped sweets were bigger than I expected. These cost £2.35 though I don’t know how many are in the box. I will have to see if these really help, I will report back if anyone’s interested.

The hair care products are, I guess, more scalp care. I think I’ve said about this in past posts but I have a flaky scalp, not that it itches it’s just the same as the skin on the rest of my body but I can’t put body butter on it all the time. I’ve had something from Dead Sea Spa Magik before, I think it was bath salts, and I remember thinking I’d try other things from the brand, I just haven’t really looked at them since and forgot about them. Then I saw these two, the Mineral Shampoo (£8.99) and the Conditioning Scalp Mud (£10.29), and the good reviews so thought they were worth a go. I’m hoping they’re not going to be the kind of thing that makes my scalp feel good but makes my hair like straw like some past ones have. It’ll be a bit odd using something with mud in on my hair but you use it in face masks so it’ll be interesting to see if that helps my scalp like it does my face.

The PurePotions Skin Salvation Scalp Oil is something that I found in the search as well. I’ve never heard of the brand before or the product so it’ll be interesting to try. I have found that olive oil has helped in the past, coconut oil was less successful and I’m going to post about that soon, so trying something that’s designed specifically to help with a flaky scalp seemed like a good idea. You put it on, leave it overnight and wash it off the next morning. I’ll be giving this a go over the next few days so we’ll see if it helps. If it isn’t successful at helping my scalp then oils are good for my hair anyway so I’ll still use it. This cost £14.99 for the 50ml bottle. 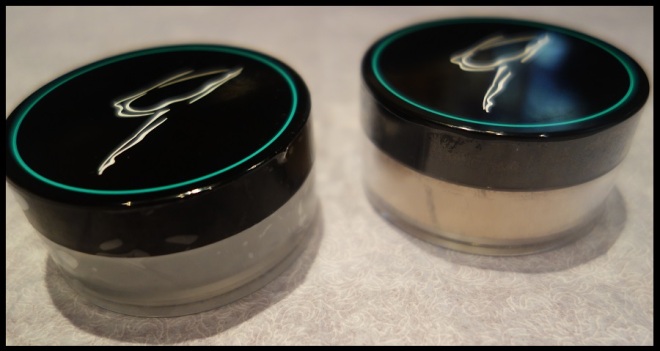 The last two products are the makeup and these were kind of impulse buys in a way I guess, I wasn’t planning on getting them but once I saw the one I had to try it. I’ve always been intrigued by the mixing bases you can get but I don’t think I really searched much for them so when this popped up on the Holland and Barrett site, I think I just searched makeup, I really wanted to try it. It’s the Beautiful Movements Prime and Create Mixing Medium. It can work as a primer or a base to mix powder products in and I just wanted to see what it’s like. It does cost £20 but it feels good so far, I tried mixing it with an eyeshadow and the powder foundation and both seem ok, I’ll have to give it a proper try though. I also got the Beautiful Movements Mineral Foundation in Stripped, which is luckily the right colour. It’s the palest, I think, and it’s a pretty neutral base I’d say, it’s definitely not very yellow on my skin but it does seem to have that kind of tone when mixed with the mixer, even though it doesn’t show in use, so I guess there must be yellow in there. I will have to have a proper play around with this too but it seems ok so far. It’s £14 which isn’t cheap for a foundation but I do like the look of it and it’s not one I’ve heard of before.

As I said before, it’s a pretty wide range of products in this post. I have definitely found myself checking on the Holland and Barrett site at times for things that I wouldn’t have thought of going to them before and I’m going to keep a list of things I might want so next time I have to repurchase the Snail Gel products I’ll have an idea of what I might get. Is there anything you guys have tried like skin care, makeup or hair care from there that you think might be worth having a look at? Have you tried anything in this post and liked it or thought it was rubbish? As I haven’t heard of these products before, even if I know the brands, I don’t know what to expect from them. I’m crossing my fingers they’re all good and so far they seem like they are but you never know what they’ll be like until you try them or after repeated use.