Sorry the external links won’t work for this post, this is the fourth time I have tried to post it and it’s crashed my computer each time. I’ll try to add them tomorrow but I just want to get this post up tonight so it’ll be link free for now.

This month I have mainly been using new things, which is unusual as a lot of the time it seems like my monthly favourites are full of old things I have rediscovered. It’s another big mix of things though I think it’s mainly beauty and accessories and a couple of them probably won’t be surprises if you follow my blog given the reviews I’ve given them recently.

I don’t think there’s been much music that I’ve been listening to really this month, a bit mix of a lot of older albums I found on my old mp3 player that only works when it’s plugged in so it’s been quite a bit of 90s cheese you get at school discos and early 2000s pop punk. TV shows though I have been watching some new things for once, I loved the Night Manager, I thought that Hugh Laurie and Tom Hiddleston were amazing in it and I really liked Tom Hollander too, he was a jerk but for some reason I liked him anyway. No spoilers so I won’t say any more. I also really loved the RSC Shakespeare Live thing that was on the BBC for the 400 year anniversary of Shakespeare’s death. The ‘to be or not to be’ bit made me laugh and I just liked the range that was on there. I have ended up going back to some old favourites like Red Dwarf and NCIS but those two new ones stood out a lot.

I think I said about Fortysomething back in January, or maybe earlier, and I finally bought the DVD set and ended up watching it through twice over the few days when my parents were away while working on other things. I think the Night Manager and Hugh Laurie in it reminded me of this series which is why I ended up buying it and I’m glad I did. Basically Hugh Laurie’s character is a doctor who’s worried about his marriage and somehow ends up hearing what other people are thinking sometimes (that bit confuses me but you just accept it in the story). His wife has a new job that he doesn’t really know about and there’s a slightly crazy Peter Capaldi doctor thrown in there along with a young Benedict Cumberbatch (his eldest son Rory) and two other sons and a lot of thinking about sex and girls and some odd situations. It just makes me laugh, though if you actually analyse it I’m not sure how much the storylines and the whole hearing voices things actually stands up, but it’s fun anyway.

I have a feeling I might have included this Roger and Gallet hand cream in Fleur de Figuier before but I have been using it so much this month and it’s empty now so I just wanted to say how much I love it before I throw the tube away. I have actually ended up cutting it in half and getting the extra bits out after taking the photo, it’s surprising how much extra you get I these tubes when you do that. This just works really well as a hand cream, very moisturising, sinks in well and this scent is sweet and you can smell the fig but there’s something slightly floral about it too.

The L’occitane shower gel in Verbena smells amazing, it’s like freshly cut lemons, the smell of the zest and peel, rather than a fake lemon scent. It’s definitely a wake you up smell and it lathers really well with a shower puff or scrubby gloves. This is lasting me a lot longer than I expected as a little goes a long way and it doesn’t dry out my skin. It’s a bit more expensive than I would want to spend on a shower gel but it’s so good I will be tempted when this one runs out. I might get some other products in this scent too as I just love it.

For my Easter/Birthday present my parents got me this Skagen watch, it’s the Anita in tan/white and a really nice watch. 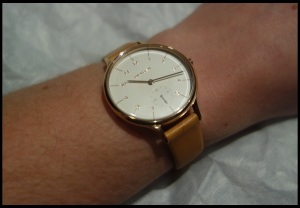 I love rose gold at the moment and I didn’t have a rose gold watch so I had that in mind when I was looking. This did cost more than I would normally spend on a watch but Skagen is a brand I trust and my parents have had Skagens before that have lasted really well. It’s just a classic looking watch, it’s a simple design and the face isn’t too big for my wrist, my wrists are small so some of the larger ones look a bit over the top, as it’s a very slim watch depth wise which makes it seem smaller as well. 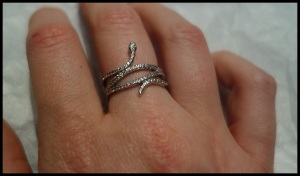 The ring is another one from Pandora, I have had a recent sort through of my jewellery and found that a lot of the rings I had were the cheap silver kind and starting to lose the silver in flakes or breaking and losing gems so I decided to have a bit of a de-clutter and if I buy any new rings they would be sterling silver and the kind that will last. This is the Swirling Snake ring and costs £65, it’s sterling silver with cubic zirconia and I love that it’s got a bit of sparkle without being over the top and the snake design is more subtle than a lot of rings I’ve seen with a snake theme. It’s so comfy to wear and it just goes with anything really to me.

The Fresh Sugar Fig Tinted Lip treatment probably won’t be a surprise to anyone who’s read my review of it. This is a product I’ve read good reviews on but stayed away from because of the price but I wish I hadn’t now. Even without the tint, which is a lovely purple with silver shimmer in it, this works really well as a lip treatment. My lips are often dry but this helps moisturise them and I only have to reapply it a couple of times in the day rather than every half hour like some normal lip balms. If you have dry lips this is definitely worth looking at, though it does cost £19, if you want to read more my review is here, otherwise I’ll end up making this post too long if I go on about how much I love this product.

Another beauty product that might not be a surprise is the Sleek i-Divine palette in Enchanted Forest. I have had this for a couple of months I think and haven’t done anything with it because I was waiting to review it, now I wish I’d reviewed it sooner. I have been using it the past couple of weeks and it’s becoming my go to palette, which has ended up with me earing more plum eyeshadows than I think I ever have. The main colours I’ve been using are the two dark plums (Beatrice and Anastasia), the matte cream (Glass Slipper) and the shimmery pinky cream (Fairy Godmother). All of them together just work so well for me. I love some of the others two, especially Prince Charming, the dark matte turquoise, but I haven’t had the courage to wear them for more than just playing around. This costs £7.99 in Boots, Superdrug and their own website and you can see swatches of all the colours in my review. It’s definitely an unusual palette, to me anyway, and has some nicely pigmented colours for a great price. 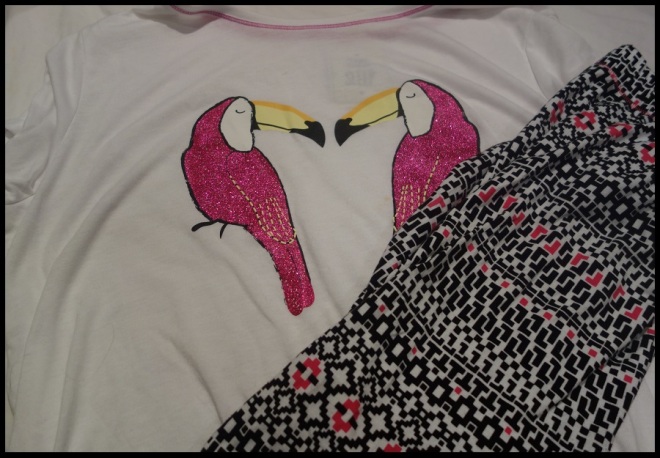 The last thing is my new pyjamas, which feels a bit odd putting in a monthly favourites but they’re so comfortable I thought I’d include them. For some reason I haven’t shopping in Matalan for years, I think maybe the quality went a bit hit and miss at one point. I have recently rediscovered them and really needed some pyjamas so I thought I’d give some of theirs a go, they’re not overly expensive at £10 for the top and leggingsm, and leggings are normally a safe bet even if others shrink. I saw the Aztec Legging Pyjama set and loved the toucan print on the top. The top is really baggy and comfortable, the kind that keeps you warm when it’s cooler but it loose enough that it doesn’t overheat you when it’s warm. The leggings are pretty standard soft leggings but the print makes them stand out. I love the top so much I would be tempted to wear it out, I might have to see if they have any non-pyjama tops in the style.

I think these are the things I have used the most this month, aside from some that I already wrote about in past ones, and I can see a couple of these becoming must have products for me so I’m glad I finally tried them. I think I’m going to have to start trying some of the things I’ve stayed away from in the past because of the price. I probably end up spending more trying out cheaper alternatives that either don’t suit me or run out faster anyway at the moment.

Have you guys tried any of these and loved them, or hated them? Anything you’ve found this month that you’d recommend? It’s starting to get warmer here in the UK, where I am anyway, so some of the products I use this month might be more summery, I’m not a huge fan of hot weather but I do like some of the brighter colours, clothes and accessories that come out in the summer time.