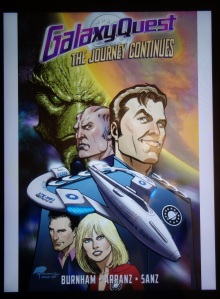 I recently decided to finally buy the DVD versions of some of the movies I had on video, I’ve had a list for ages and this included Galaxy Quest. It was on the Amazon search that I discovered there are two graphic novels about the movie written as sequels so I thought I’d give them a go. This is the first one I got, it’s the most recent but I didn’t get it in physical form as it’s three times the cost of the Kindle version which is £2.99. The link in the UK on Amazon.co.uk is here, though it’s probably available in other formats on other sites too.

This book is written as a sequel to the movie, so it does help if you’ve seen the movie itself but there is a bit of a recap at the beginning as an introduction that gives the important information that ties in with this story. The idea is that there is a war going on in a distant galaxy that is won by one side, the Omega 13 is activated as in the movie and time goes back 13 seconds but this time the other side wins. Years later the side that loses goes in search of the reason for this change and they find the crew of actors who were in the original movie.