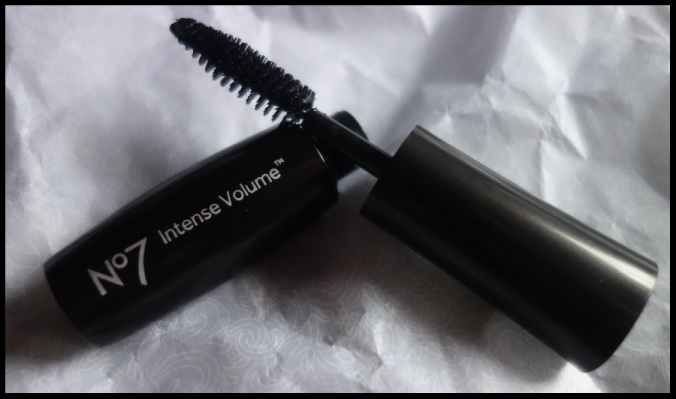 I’ve done a few mascara reviews on the blog before yet I still have more that I either haven’t tried or haven’t reviewed. I am steadily going through my samples to see which I might get a full sized one as my full sized mascara is almost at the point I need to get a new one so seeing if there’s another I might get instead. This post is about the No7 Intense Volume mascara, which I got in a gift set at Christmas. I can’t remember if it was one of those spend X amount and get a free gift or the set I got in the sales but it’s a mini mascara because of this. This mascara claims to improve volume while also giving great definition for your lashes so I’m giving it a go with both one and two layers and seeing how well it lasts.

This is the original black version of the mascara though it’s also available in brown and navy and costs £9.95 for the full sized version, which in past experience is probably around twice the size of this one. It’s also available in brown and black in a waterproof version that also costs £9.95, the main difference in the packaging is a blue ring near the lid but I haven’t seen the waterproof one in stores anywhere.

The packaging itself is pretty standard for a No7 mascara, it’s got the slightly curved container that makes it easy to hold as the shape of the handle is nice and fits well in your hand. I think the colour of this is a really dark brown, or it could be black though it seems to have a small amount of brown glitter in it. It’s that odd colour that some of their makeup brushes have that could be either. 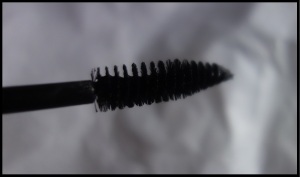 The mascara wand itself is another standard one, it’s got the fibre style tip and it goes in a spiral with a good gap between each layer. It does seem to get a lot of the product extra on the end, more than a lot of others I’ve used recently, which isn’t too bad but you end up with a bit of a mess at the top of the part that holds the product itself. From past experience the wands in these minis are the same as with the full sized and I’d say this isn’t one of their best wands. I prefer the plastic ones, they just seem to work better for me, but I’d say as far as fibre based ones go it’s decent but not great. I do like these minis when it comes to controlling the wand as it’s shorter so you can rest your hand on your face without it being an awkward length.

Application is easy and it does cover all of your lashes very well. The mascara itself seems to be pretty thin in comparison to a lot, it coats well and one layer does just give a nice thin layer with a bit of colour as well as a bit of volume. Unfortunately it seems to take a long time to set, it felt pretty sticky when I blinked even when I left my eyes open as long as I thought I needed. After a bit, when it dried, it seemed like the eyelashes started to stick together. 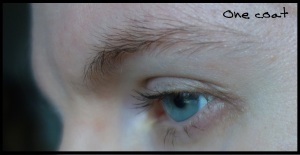 It was odd how they seemed defined when I first applied it but they almost seemed to melt together a bit, One layer does stick well, it lasts easily for six hours on my top lashes, though my bottom lashes did start to melt a little bit in that time and leave a small darker smudged line under my lower lashes. Removal is easy with any of the basic products I tried, it just wipes away.

I tried adding a second coat to one of my eyes as a comparison and it definitely added more volume, it added length too which surprised me as that wasn’t something it claimed. I could definitely tell a difference between one and two coats but this second coat took even longer to try than the first, it was probably ten minutes before it felt non-sticky. I also found that I was aware of my eyelashes when I had two coats, there were a couple of points where they seemed to be in my vision, or that I knew they were there. It didn’t feel heavy though which is a plus and there was no flaking even with two coats. 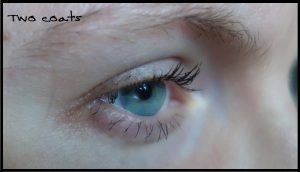 It did seem to melt my lashes together more as well, which does kind of make them look more voluminous but it’s not a look that I like on me. Two coats did last well but they felt a bit melty at times and I found a bit of mascara in the outer corner of my eye at times as my eyes have been watering a bit recently, so much pollen out at the moment. Removal was easy again, it did take a few rubs to get rid of all of it but that was due to the amount not how well it stuck to my lashes.

I know this is not a waterproof mascara but I thought I’d give it a test with some water anyway. The eye with two layers was streaming, you get the classic running mascara look even with a light spray with a spray bottle. The other eye wasn’t too bad, it did leave a bit of a darker line under my bottom lashes faster than without the water but the top lashes lost a bit of colour without making a huge mess of my face. One layer might survive a rain shower, two layers probably wouldn’t even last through that.

Overall I think this is an ok mascara, I wouldn’t say that it’s any better than other mascara out there that cost less so I’d recommend choosing another brand going by how it worked for me. The waterproof version might be completely different, I have found that with some brands the normal one is very different to the waterproof even in the same colour. This is a good product when it comes to colour variation within No7, I have seen it in stores and the navy is quite a nice blue, it’s pretty dark so it’s not obviously blue and would give your eyes a subtly different colour. The brown is a typical brown, a lot of brands do it, so if you want black or brown I’d suggest looking at another company or going for another one in the No7 range, I’ve found pretty much all of the others I’ve tried by them better than this and there isn’t a huge price difference. My favourite is the Extravagant Volume one which is available in both brown/black and black.

I do like a lot of the No7 products I’ve tried but this one seems to be a bit of a dud for me, it is one of their cheaper mascaras and I think it’s worth spending the bit extra for some as they do seem better. Have any of you tried this one? Did you find it different to I did?

One thought on “Review: No7 Intense Volume Mascara in Black”