A while ago Fortune Cookie Soap did a Doctor Who themed collection, though it sold out so fast I didn’t get to buy any of it. They then did a sort of pre-order one where you ordered what you wanted and they made it. There were quite a few products in this collection and I did have more in my basket originally but the postage was so high it was getting to be £40 for postage alone, I ended up getting it down to four products from the range and one from the permanent line.

Other than the permanent product, the tea tree solid shampoo, the rest of these aren’t available at the moment but as there is an off chance they may bring it back at some point, they seem to do this with the most popular products appearing for a limited time a while after they were first released, I thought I’d do a mini review sort of thing for each one. I also find that most of their product types are fairly consistent so if you’re curious about their shower jellies then the way this one behaves is likely to be similar to others in the same product type. Unfortunately I have found it difficult to find anything with an actual scent description for these so I’m just going by what I smell, I’m not sure how accurate it will be to what it’s supposed to smell of but I’ll give it my best shot.

As you may know if you follow my blog I am a big fan of Doctor Who so I had to get something from this collection. I would have bought it all if the postage wasn’t so high and I do regret not getting a couple of things but I went with the ones that sounded like I’d like them a lot or the names or products were ones I just felt like I had to get. 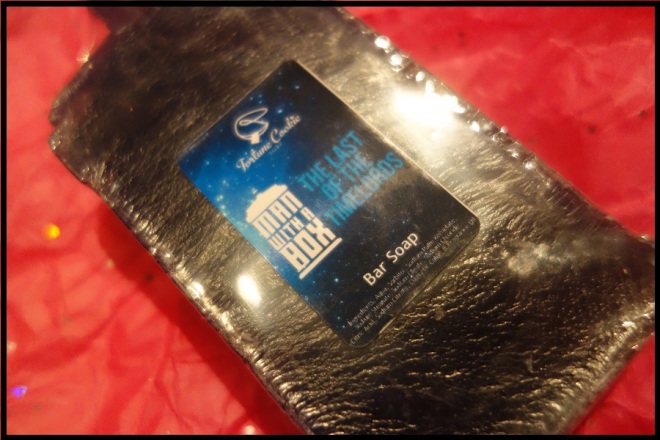 I guess this first one will come under that last category, The Last of the Timelords soap, it’s a TARDIS (or Tardis for the older series) shaped soap and it’s so pretty I’m not sure if I could use it to the point the shape goes. I have tested it but used the back so it still looks good, not sure how much longer I’ll be able to do that though. The scent itself for this is very light and somehow feels like a cold scent, I’m not sure that makes sense, maybe it’s a memory association thing but it smells like it should be cold. It’s fruity and floral, I’d say it’s something citrus in there as it’s refreshing. I think it has some kind of mint in there, maybe that’s what gives it the cold feeling.

I do love the Fortune Cookie Soaps, whether they’re in the fortune cookie shape or their bar soap form they just seem to work for me. I often find with other brands that the clear based soaps dry my skin but I haven’t had that problem with the ones from here. You still get that squeaky clean kind of feel to your skin but it doesn’t dry my skin out more than it was already. They don’t lather as well as a lot of companies but I’m not that bothered about that, you get a fair amount when you use a scrubby glove or shower puff. They also last a long time, the fortune cookie shaped ones are supposed to last at least 50 washes, I guess that’s without the scrubby gloves, but it’s still impressive and the bar soaps have lasted me over a year before if I’m using it in between other soaps. 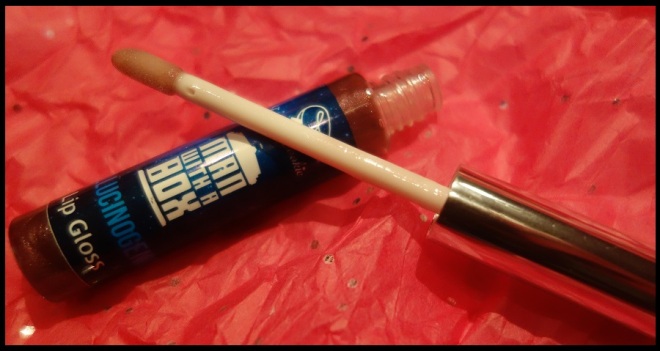 The second thing that I really wanted was the Hallucinogenic lip gloss which is meant to be based around the idea of the River Song lip gloss. I haven’t used any of their other lip glosses to know how they compare for consistency but this one is really nice. The smell really reminds me of Calpol for some reason, it’s sweet and sticky and probably some kind of berry in there but it’s just like the baby Calpol in the UK, that pink sticky one. It looks like it’d have a bit of a purple tint on your lips but all I can see really is shimmer and a glossy look. It’s nice, it doesn’t feel overly thick on your lips but it stays sticky for a while. The shimmery moist look lasts longer than a lot of others I have had so it’s good in that way.

The Adipose shower jelly smells like marshmallow, very sweet and sticky and sugary. This is based around the Adipose in one of the episodes with the Tenth Doctor and Donna Noble. I don’t know what there is about a ball of fat that’s animated and given a little face but they’re surprisingly cute and this product is a bit weird in that it feels like I’d imagine they would. I’m not sure if this makes me feel slightly weird using it or not but it’s still a good product. I do like the swirly pearl look they used.

The shower jellies have changed a bit since the last ones I got from them, that was a couple of years ago I think as they were in shallow and wider pots and less solid than this. I’m not sure if the solidness is something that’s specific because of the theme or if it’s the new formula but whatever it is I like it. Compared to Lush jellies, which I have a lot of, it’s a lot harder and doesn’t break apart as easily. This one doesn’t come out of the post and flop around, you have to cut a bit out with a knife or spoon and then use it. It works with shower puffs and gloves but you can’t squish it into them in the same way. The lather is softer though and it feels creamier than most of the Lush shower jellies. The solidness means I can see this lasting a long time as you only need a little and it’s easy to break off a small part to use. 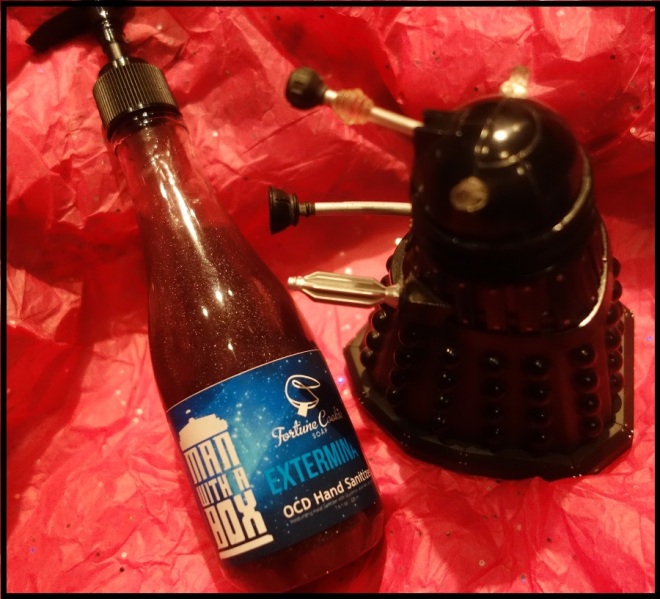 The last Man With a Box product I bought was the Exterminate Hand Sanitizer and I’ll be honest and say it was probably 90% the name that made me buy this one. The scent is very summery, it’s another bright floral with something citrus in there but this one has a more jasmine or musky smell to it, it’s hard to pick out but it’s not as light as the Last of the Timelords soap. I have never bought one of these full sized bottles before and I have to say I do really like it, I’m tempted to get another next time I order. The pump is easy to use and one pump is more than enough for your hands when you use it. It also looks nicer than a lot of the hand sanitizers I’ve had so I don’t mind having it out on the side.

I do like their hand sanitizers, I normally get them in the Soap Boxes, and I use them all the time. They don’t dry out my hands and leave the scent on there for a while after. This one is a fairly strong scent so it lingers for quite a while but others have been more subtle and you have to smell your hands to get the full scent, which does look a bit odd sometimes. These last me ages in the smaller bottle so I can see this one going a long way as the formula is the same. It’s fairly thin and melts on your hands easily so you can use it quickly. This one does have glitter and has left my hands slightly sparkly but it doesn’t bother me, not one I’ll be offering if other people want to use it though as it does get on things when you pick things up afterwards. 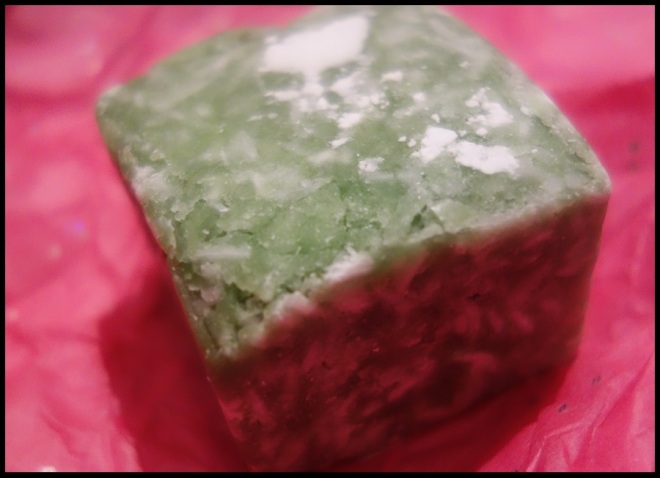 The final product was from the permanent line and is one I’ve bought a couple of times before. I like their solid shampoos as the lather is soft and it does lather easily when using it straight on your hair, especially if it’s short. This is the Tea Tree Solid Shampoo and that’s exactly what it smells of. The scent takes me back to witch hazel and tea tree acne treatments I used to use as a teenager. I have a dry and flaky scalp and this shampoo helps a lot with calming it down so I’d recommend giving it a try if you have the same problem. If you don’t then they do a range of scents in this and they do linger after you use them, especially if you use the solid conditioner. These also last ages, I have found that after a few months it helps to cut a thin layer of the outside off as a sort of skin seems to form and reduces the lather you get but other than that they can go for six or seven months depending on your hair and how often you wash it or if you use other shampoos in between. This is SLS and cruelty free, I think all of the soaps are as well as the shampoos, the whole company is cruelty free. This costs $8.99 which I think is a good price given how long they last.

Considering I was only going by the descriptions for the Man With a Box products I’m very happy with how they turned out. I do like everything and wish I’d bought some of the others like the oil perfume, the solid lotion and the body wash but I think these are probably the best for me as I probably have more shower gels and lotions that I will need for the next year. Did any of you get anything from this collection? Or would you get any of these if they popped up again the future? I hope they do do it again, or some of the ones I didn’t get as I’d like to get some more. I’ve seen the odd thing from past collections appear now and then even though it isn’t the whole collection so I’m crossing my fingers for something like that to happen with these.

One thought on “Recent Purchases: Fortune Cookie Soap Man With a Box Collection”