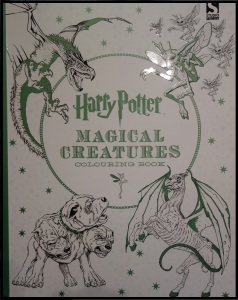 Author: Warner Brothers (I guess, there’s no author or illustrator given but I’ve included a photo of the names acknowledged in the back of the book)

Since starting with adult colouring I have found so many books that I wanted but held back from getting them as I’d have more than I could actually colour in. However, when I saw both of the Harry Potter colouring books I decided to get them as they combine two things I like. They were also half price at £4.99 on Amazon. One thing to note, which I didn’t realise until after I’d bought them, they aren’t sold as adult colouring books so most of the images are closer to those in traditional colouring books rather than being made of smaller areas and patterns within the big picture.

This is the second in the collection, I guess they’ll be making more given how popular these ones seem to be amongst others I know who enjoy colouring in, and is based around the magical creatures in the Harry Potter universe. As with the other Harry Potter colouring book there are colour pages at the back with a combination of movie stills and concept art, I think they’re all colour versions of designs within the book. There are 80 pages with lineart, including the introduction page which has a design around the words to colour in. There are 16 pages of colour at the end so overall there are more pages in here than quite a few of the colouring books I’ve seen online. 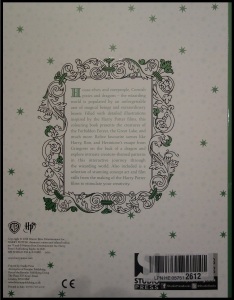 I like the design and style they’ve gone for with these Harry Potter books for the covers. They have the lineart for the various creatures and parts of them are filled in with a metallic colour, in this case a green. There are also green stars dotted around the front and in the background there are more of these stars in green but very faint so the creatures stand out but there’s still some texture in the background. On the back is an ornate frame design with a bit of an introduction on the book.

The paper this book is printed on is good quality, it’s a proper white background rather than the off white cream that some go for. It makes the colours stand out more and means that things like purple and blues are true to the colour rather than getting a bit of a yellow or green tint to them, especially when using fine liners. It feels really smooth and I have found that most of the fine liners I use are fine for it, they don’t bleed through even going over them a few times. 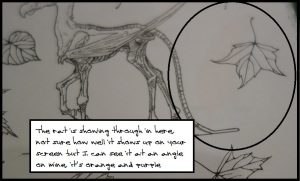 However, I did find that when I did some brightly coloured rats the darker purple shows through to the other side faintly even when I was being careful and only used one layer. I’m not sure why that is but I’d recommend sticking with lighter colours or pencils. The fine liners I’m using are Staedtler so it might be different with another make. The colours don’t bleed through the lines, I went over the aqua colour a few times and there was no bleeding, it does show up when you go over different bits repeatedly so it makes it more obvious with pens than some other colouring books I have.

The designs themselves are, like with the first book, in a variety of styles. There are quite a few that are double pages with just images that recreate stills from the movies and these have larger areas that are all one colour and I think these are less likely to be ones you’d do in odd colours. 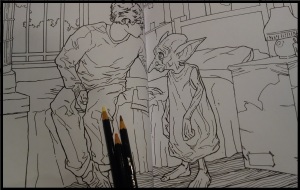 Some of the images are repeated patterns but there are quite a few with an image of the creature and a frame of some kind around them and then a background with a pattern on it so you get parts of the page with smaller areas as well as the larger areas for the actual characters. I like how with the ones that have a character like Dobby or Kreacher they do fit quite well with the characters themselves, such as socks around Dobby and an ornate frame, like you’d expect from an old family portrait, around Kreacher.

The pictures also vary in line thickness, there are some that are very delicately drawn with a lot of detail, or just smaller images like the repeated pattern of Scabbers, and then there are others that look a lot like ones you’d find in a children’s colouring book with thick lines. I like both versions but I think I’d prefer it if the style was more uniform.

One thing I think might have improved this book, though this is a small criticism really, is that there are a few pages in it with things I think of as plants rather than animals. It would have been nice to have a book of magical plants, maybe they’re planning on doing that too, and having these in that. Maybe other people think of the Womping Willow and the Devil’s Snare as animals though, they are animated and the Womping Willow at least is a fairly iconic image from the third book.

Having seen that this is sold as a normal colouring book rather than an adult one then I can definitely see this being a good gift for a child who likes Harry Potter. It’s definitely one for Harry Potter fans rather than just people who like colouring in, though it might appeal to people who like fantasy in general as there are dragons and merpeople and some others that are probably generic fantasy characters, a lot of the pages are pretty specific to the Harry Potter universe, including human characters and the house elves.

The larger areas of one colour might make this less relaxing than a lot of adult colouring books, but I have enjoyed it so far. I think for those with the larger areas and the movie scenes I’m probably going to end up doing more shading and mixing colours simply because otherwise it might look a bit boring. In that way it’s one that lets you use your imagination to draw your own patterns within the images if you wanted, for example you could do swirls in different blues on Dobby’s pillowcase and it would still be obviously a different part if you used a different colour for his arms and face.

I think this is a good book for Harry Potter fans who enjoy colouring in, or at half price it might make a nice book for a collection if you know someone who wants anything harry Potter. I don’t think any of the art in the last pages is exclusive but it might be when it comes to the concept art. I am definitely happy I have it, if nothing else it’s another part of a Harry Potter collection and as far as Harry Potter licensed things go it’s on the cheap end of the scale. At £5 this is a great price, at £9.99 I might have had to think more about it as it’s more than a lot of the adult colouring books are on Amazon and in The Works sales. I’d recommend waiting for it to be at a lower price if the price has gone up now, I know it’s at £7 often on The Works website so I’d look around for the best price.

All images are copyright Warner Brothers and used for review purposes.