A couple of weeks ago I went to Sally’s Express for the first time, it was recommended by a local hairdresser and we mainly went to get hair things but I saw the price of the nail varnishes and had to get some. I bought four as they are in a buy three get one free offer but the two I’m reviewing today are the ones by Morgan Taylor. These are also in the Kung Fu Panda 3 Limited Edition Range so I’m not sure how easily available they are elsewhere or how long they’ll be available but they seem to be in a lot of places in the UK at the moment.

The two colours I chose are Po-Riwinkle and Warriors Don’t Wine as I’ve been looking for some similar colours to two I have and love already. The Sally’s site seems to be down at the moment (or not working for me) but these cost around £5 if you can use a salon discount or I think they were around £10 without which is cheaper than they seem to be normally. Marks and Spencer are having an offer where they’re £8.80 but I can’t see these exact colours in it.

I got a Morgan Taylor nail varnish in my Marks and Spencer Advent Calendar in a red colour and was quite impressed with the drying time and the lasting power for the formula so I thought I’d get these two as I love the colours and seemed close to what I was looking for. The bottle itself is nice, it has 15ml of nail varnish in it which is a good size when some more expensive brands have less. The handle on the brush is easy to hold and control as it’s fairly long and the shape sits in your hand easily. The brush itself isn’t anything special, it’s a fairly slim brush but the bristles seem pretty long as it seems to go over my whole nail in two swipes rather than the three that some nail varnishes need.

The formula for both of these is fairly similar in dry time but the Po-Riwinkle one seems to be thicker and creamier than Warriors Don’t Wine. The first coat for both dried within two minutes, I timed the second coat and I could touch it easily and do things within three minutes as well. As the formula is so thin I did end up doing three coats on most of my nails, four on two that got messed up. The third coat does take longer to dry and stays tacky for a while, I’d say it’s around ten minutes before I would safely do anything with them but this is still a lot faster than most other nail varnishes. This quick drying time does have a downside in that you don’t have much time to go back if you missed a patch or there’s a small bubble when you’re applying it as it gets tacky quickly and putting a thin layer over the top makes it catch on the layer beneath and make it uneven. That’s why I ended up with four layers on two of my nails.

As far as staying power with these, it’s been over three days and there aren’t any chips, there’s a bit of wear on the tips at the corner but I didn’t put a top coat on to see how well it’d last and this is pretty impressive. Most of the time my nail varnish is chipping within two days so this is a good sign for me. I’m planning on removing them and redoing them, adding some nail art in the opposite colours to the base with the nail dotter tools I bought at the same time to try them out and then do a gel top coat to see how well that works at making them last.

Trying to show the glitter. Sorry about the mess around some nails, my hands are a bit shaky

The first one I picks up was Po-Riwinkle which is a really nice periwinkle blue colour. I was originally looking for a replacement for my Planks a Lot from the OPI Pirates of the Caribbean collection a few years ago but when I got the Po-Riwinkle home I realised it’s actually really close to a Nails Inc InStyle only nail varnish I got with a magazine called Bluebell (I think) that’s nearly finished. This nail varnish looks like a standard crème finish but it’s actually got some very subtle glitter particles in it. They don’t stand out as they seem to be a slightly matte silver and the formula for the base itself is pretty opaque so they only show in direct sunlight as a bit of sparkle. Otherwise they do add a bit of texture to it but I still only notice it when I really look. 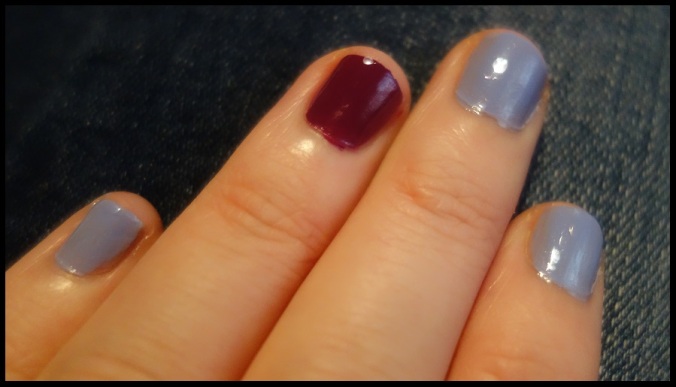 The second colour is Warriors Don’t Wine which is a bright plummy purple to me, not really a wine colour as it’s not red enough but that might just be me. It’s a really close dupe of an Elf colour that they used to do and I love called Punk Purple so if you liked that this might be a good replacement as I haven’t seen it on the Elf UK store online. I’m not sure about other countries though. This is a pure crème finish and is very shiny and smooth.

Overall I’m impressed with these so far, I think I’d even pay full price for these which is rare for me to say. I hadn’t heard of this brand before my M & S advent calendar so this is definitely a good thing to come out of that and I’ll be looking at theirs in the future when I want nail varnishes. They have a great range of colours and seem to be good quality, at least they work for me. I know everyone’s nails are different so they may not stick as well for you but I’d say they’re worth giving a go, especially if you can find them somewhere on offer or somewhere that sells them cheap online. The Kung Fu Panda 3 range in general seemed really good to me, colours that I’d like and wear a lot, so if you like these colours I’d see if you can get them quick in case they disappear, I’m not sure how long they’ll be in stock places as I know some companies do Limited Edition and it means very limited whereas others do ‘Limited Edition’ and it’s there two years later still.