I’ve been a fan of Harry Potter for years, I think I got the first two books in 1999, and always said I’d only have the original copies that I owned and not get any of the newer versions they came out with. However I saw this illustrated version online recently, it was published in October last year, and I loved it so bought it when I saw that it was half price on Amazon. I wasn’t sure originally if it was a complete copy as it seemed thin compared to what I expected with the amount of illustrated pages that takes up space for words. I have compared it at random points throughout the story to the original copy and it matches exactly.

This originally cost £30 but when I have ordered this it was £14.99. It is pretty big for a book and I have a photo of it next to the original Bloomsbury paperback from the UK for comparison. Size wise it’s around the same size as a few of the adult colouring books but thicker. It’s a hardback with an illustrated paper dustcover and the hardback underneath is red.

I thought that for this book I’d put the review of the contents itself here at the beginning for a change as I know a lot of people will have read it or know what it’s about because of the movies so I kept it short. It is spoiler free if you don’t know what it’s about and the images I think are spoiler free too. If you have seen the movies then there are some differences between this book and the original movie, there’s more Quidditch in this and some of the adventures go into more detail or small details are changed. If you liked the movie then I would recommend the book as it does build on what is shown in it.

The story is about a boy, Harry Potter, who discovers that he’s a wizard on his ninth birthday and is invited to the wizarding school of Hogwarts where he meets all kinds of people and there’s plenty of adventure and magic in it. The main story is about him and his two friends Hermione and Ron and how they became friends and what they go through in their first year at wizard school. There are other characters and, if you read later books, you will find things that will be repeated or commented on then as important parts of the story even if they seem less so now. Parts of this story start up the whole history and future between Harry and the main bad guy throughout the series of books, who shall not be named but you probably already know who he is.

This is the first in the series of seven books and is the shortest of them, I actually forgot how short it was until I started to read it again, but it packs in a lot of action without too much description so it keeps the attention of younger readers too. I think I was 9 when I first read it and I loved it, I know that there are some kids who read it younger than that now and I’d say it’s a pretty child friendly book if they’re into magic and wizards, I know some people who wouldn’t be into this kind of story normally but love Harry Potter anyway. The language is pretty simple as it’s written for children but the ideas in there do build up in later books and there’s a language all of their own when it comes to food, money and the wizarding world in general on top of the spells and animals.

As I said it’s pretty packed full of adventure and even the beginning starts with unusual things happening, though the action does build up later and the fourth or fifth chapter starts the more obviously magical part of the story. Outside of the wizarding world specific language I don’t think there’s anything too complex and the book introduces each of these things to the reader as it goes along as Harry himself doesn’t know anything about them when he first encounters them. This copy of the book has 246 pages (my original copy has 223) so it’s not a long read and a good introduction to the world.

The main thing that drew me to this book is the illustration style, the image on the front cover is of the Hogwarts Express with Harry in the bottom left corner. I love how it’s basically Jim Kay’s interpretation of the scene on the original UK release cover, I’m not sure if it’s the same on other releases, I know it’s not on the French one I have. It’s one of those iconic things from the series so I’m glad they used it. The back is a continuation of this picture so it shows more of the platform with a small quote from JK Rowling on the illustrator. The front cover has the title in a metallic turquoise or blue which really stands out, the same colour is used on the spine of the hardcover itself, I would have quite liked it in red for the dustcover as it’s the colours I associate with this book for some reason, but it does go with the picture. 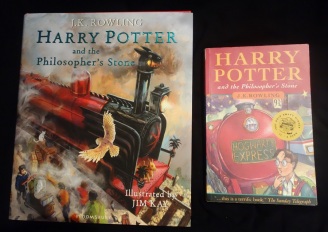 Front cover next to old paperback

Back cover next to old paperback

The paper of the dustcover is thicker than most of the other books I own and has a slightly shiny appearance on the inside while the outer cover is a matte finish which makes the title stand out even more. Inside the cover, printed on the dust cover is the blurb on the part that flips around the front and some information on both the author and illustrator on the part that flips around the back. I think one of my favourite illustrations in the book is the one on the inner cover of the hardcover book, it’s done in ink and looks amazing and very moody. There’s a different one on the front and back covers, though both are of Hogwarts itself from different views and they really fit with my idea of the castle originally before the movies. 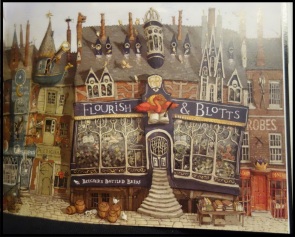 This Diagon Alley is perfect to me (Image (c) Jm Kay)

The main difference with this compared to the original is, obviously, the illustrations that are throughout the book. Some of them take up a double page, some are single page or half page full pictures of scenes in the story but there are also some that are simply decorative pieces around the words. Each chapter also has some decoration around it, whether it’s on top of the chapter title or over two pages. This art style is so detailed and I think it’s a style that would appeal to kids and adults. There are going to be some pictures with characters that don’t tie in with your imagined version and I don’t think any of them look like the movie versions, these look closer to how I’d imagine them before the movies and still see them in my mind. I think the only two that for me have been replaced by the movie version in this first book in the series are Hagrid and Snape.

One detail in this book that I really like is how they’ve put faint designs in the background of the pages behind the words even on those without illustrations. They all have either the texture of old paper, some water marks and creases or some ink splotches in the corners that make it seem like it’s been kept and read a few times before. The paper quality itself is really nice too, it’s got that shiny feel that means it’s durable and I can see it staying looking nice for quite a long time even if it’s read and reread.

The layout of the pages in this book is really nice. As it’s a larger book they split the pages into two columns each, or around the illustrations in some of them, so you don’t have huge blocks of text which could look a bit intimidating and wouldn’t really work where there are short lines of dialogue rather than the longer paragraphs. The font itself is really easy to read too, which feels odd to say in a book review as they all should be, but it’s more spaced out than a lot of normal paperbacks and a slightly bigger font than my original copy.

Overall I would definitely recommend this book, I think it’s one that even at full price I would buy now I know the quality of it. There is an illustrated version of the second one coming out soon so I’m thinking of pre-ordering it, though I might wait a bit and see if that appears in the sale at some point not long after it’s released.

I think the story itself is great, it’s a good book for children and young adults who are into magic and wizards, it’s got a good amount of adventure and there’s a great range of characters. I think it’d appeal to a lot of kids as they could probably imagine themselves in the world, I know I did, and could even pick one of the three main characters that they think they’re like and empathise with what they’re saying or feeling. It’s a pretty quick read for adults and as there’s so much action it’s one of those that I keep thinking ‘I’ll read one more chapter’ and then it’s an hour later and I’m half way through the book.

I would say, however, that this version of the book is probably not the one to read if you’re just getting into the world. It’s a lot more expensive than the normal paperbacks and there are so many different versions out there that I’d recommend getting one of those first. I think this book is probably more aimed at those who already know the world and love it, or people who like books with a lot of illustrations and the art style of this book. I will definitely be buying the others, or however many they release, when they do them but I’m not sure how they’ll manage to get the sixth book into one like this without it being huge and really expensive, I guess we’ll have to see when it comes to that.

The paperback version of this book is available in pretty much any book store at £4.99 (I think, that’s the price on mine anyway and seems to be the quoted RRP) but it’s available on amazon and other sites for less so if you’re just getting into the world of Harry Potter, or buying for a child or someone you think will like it, then go for that instead. If you want this illustrated version then I think Amazon is you’re best bet, in the UK anyway, as it’s £14.99 at the moment and the other stores selling it below the RRP of £30 have it around £17 so it’s the best price right now.

All images in this review are copyright Jim Kay and Bloomsbury and any text you can read is copyright JK Rowling and they’re all used for review purposes.

2 thoughts on “Book Review: Harry Potter and the Philosopher’s Stone by JK Rowling and Illustrated by Jim Kay”