I was planning on doing this post on Friday but ended up having a tooth out and took me a while to get over it. It’s only a small post as I went shopping on Thursday last week and popped into Lush. I didn’t get much but I wanted to post this as a couple of these are limited edition Easter and won’t be around for much longer.

As I was in store I got to have a look at all of the products in person and I was tempted by some of the others but these stood out for me. I haven’t been in a Lush store in ages, I think the last time was years ago, I used to find that they jumped on you as soon as you went inside the store which put me off and then they got better but I just wasn’t into Lush. I’m still not a huge fan of them as the consistency of the products isn’t great when it comes to certain products, mainly the bath products and the soaps, and the prices are getting higher. I did find that last week when I went in the products did seem to be pretty well scented, even when surrounded by the general Lush store smell, so maybe they’re getting better again.

Two of the three products I got are limited edition Easter products; the Humpty Dumpty bath bomb (when did they change from bath ballistics to bath bombs?) and the Bouncy Bunnies shower jellies. The other is the Big Bang bubble bar which I liked the sound of but wanted to smell in person before I got it. This post is kind of a first impressions and review type post, I have tried the shower jelly but not the two bath products. 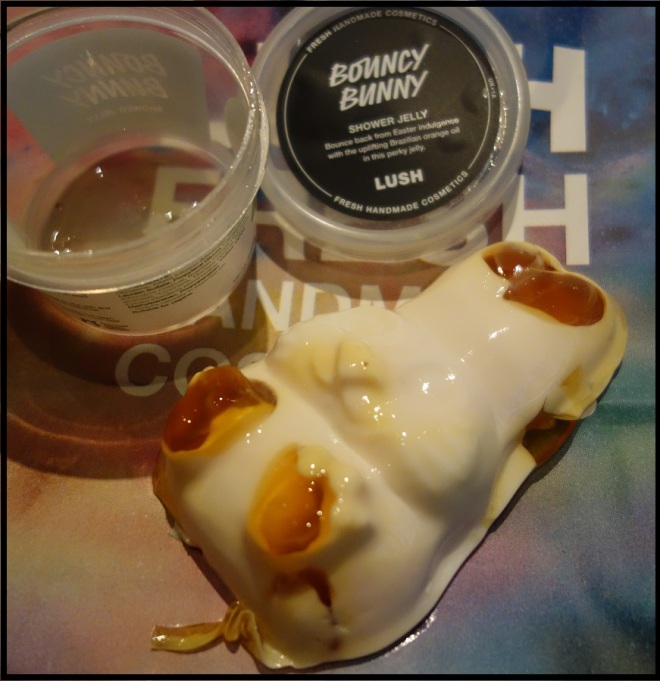 I like how a lot of the recent limited edition things from Lush have been orange scented and this includes the Bouncy Bunny shower jelly in the Easter range. This is described as a uplifting Brazilian orange scent and comes in a bunny head shape with a mix of creamy pale orange and a clear bright orange which varies for each individual product. These are 90g and come in the standard pots, they cost £3.95 and are suitable for vegans.

I think this one is a great orange scent, it seems to be one that smells slightly different when I keep smelling it. Its always orange but it seems to be either fresh squeezed orange juice or the scent of orange boiled sweets. On my hands it’s the boiled sweet scent that’s left over but when I lathered it it was closer to the fresh squeezed orange.

It lathers pretty well if you use a shower puff or scrubby gloves but without it’s not much of a lather, you just get the soap squeaky clean feeling. It’s not that moisturising but at the same time not drying for my skin. I’d say it doesn’t gave any benefits or downsides skin wise. The scent doesn’t last very long after the shower, maybe ten minutes, but it’s pretty refreshing while it does last.

I think the shower jellies are some of my favourite Lush products, they seem consistently good and string smelling and they last ages. They’re like solid shower gels and can be used for all the me things, I’ve used them as a shower gel to wash or as a shampoo. It can work as a bubble bath if you hold it under the tap when it’s running but the bubbles aren’t very soft and tend to break fairly easily. There are some recipes for changing the jelly into gels which seem to work fairly well though they do need to be used up quickly and I haven’t used one in ages. 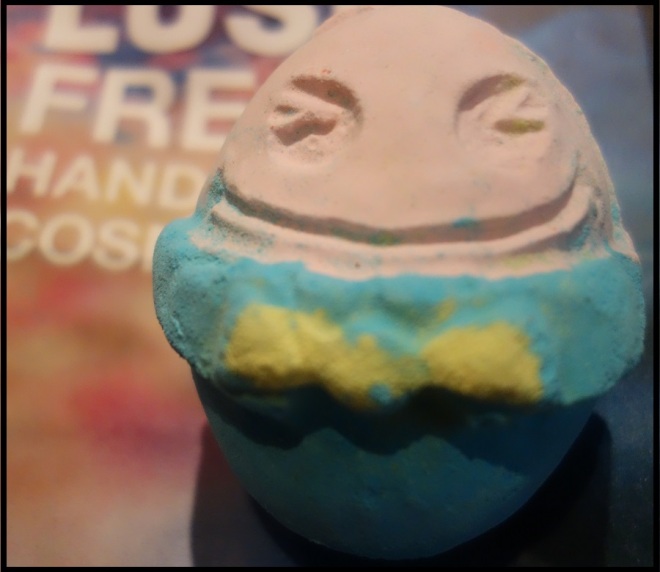 The second Easter product I got was a Humpty Dumpty bath bomb in shape of the character from the nursery rhyme. It’s quite cute but kind of creepy at the same time and he’s larger than standard bath bombs and I think I’ll get a few baths out of him if I break him up before I use him. Compared to the other egg shaped bath bombs I’d say he’s probably two or three times the size and the price is reflected in this, at £6.95 he’s expensive if you just get one bath out of him but getting three it comes out at cheaper than the standard lush bath bombs. Unfortunately this does mean I’ll miss out on the yolk effect that’s supposed to happen as he fizzes in the bath but I’d rather get more out of one than the fancy colours. One thing I’m a bit worried about, as it’s such a bright colour, is whether it’ll be one of those that stains. I haven’t seen anything about it yet but I’ll make sure the yellow isn’t all concentrated in one bath. These bath bombs are vegan friendly. 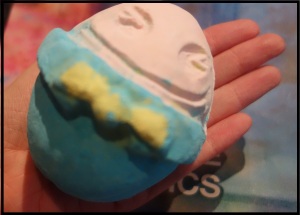 This is the strongest scented of the things I bought this time, my room actually smells like him as I’ve had the paper bag open on the side before I did this first impression or review post. To me it smells exactly like the old Ma Bar bubble bar which was meant to be inspired by Mars bars so a chocolatey caramel sort of smell but it never smelled of chocolate to me and this one doesn’t either. The official description of this on the Lush website is “caramel-smooth personality is revealed in notes of bright bergamot and Brazilian orange oil” which makes me think of something maybe caramel and chocolate orange scented for some reason. I’d say there’s the caramel scent in there, maybe it’s something like a crème brulee with something tart in it, I really don’t get anything I can pinpoint as citrus though. 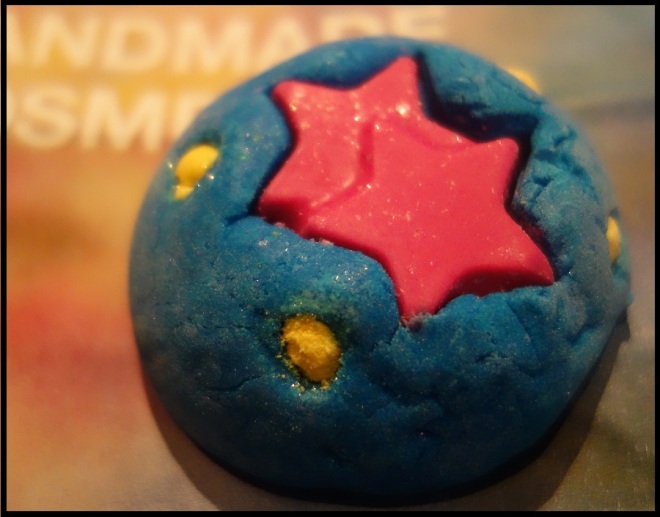 The last one I got is a permanent product and fairly new, it’s the Big Bang bubble bar. I’ve had my eye on it since I saw the pre-release photos that were around as it’s so bright and the idea of a combination of bath melt and bubble bar intrigued me. This costs £3.75 and I normally get two baths out of a bubble bar. These are meant to be soft and crumbly but this one is pretty hard like they have been recently. I have tended to stay away from their bubble bars as they’ve been disappointingly hard and don’t make the bubbles as well because of this and you get harder lumps that don’t dissolve properly. I’m hoping this one will be better but it feels like it might not be. I’m not sure if this one is vegan friendly, I’d suggest looking at the ingredients on the website if you want this.

The scent of this is really nice, it’s a fairly subtle citrus which is unusual as citrus scents are often pretty strong and in your face as a group. I’m not sure if it does but I think the bright pink stars in the middle are sweeter, that’s the effect I get when I smell it closely but, as you can’t actually take these out without breaking the rest, I can’t tell until I actually get it in the bath. It’s supposed to be grapefruit and lemon myrtle oil so pure citrus in its main scents and it seems to smell slightly fizzy somehow.

Overall I’m happy with these, which I should be as I picked them at the shop, and I’m crossing my fingers that the bubble bar is better than recent ones I’ve bought, I’m looking forward to seeing the difference between this with the bath melt and the normal bubble bars. I do love the jellies and haven’t been disappointed with them in the past and the bath bomb is strong so I’m hoping they’re back to the old quality with this too, I’ll see what happens when it hits the water.