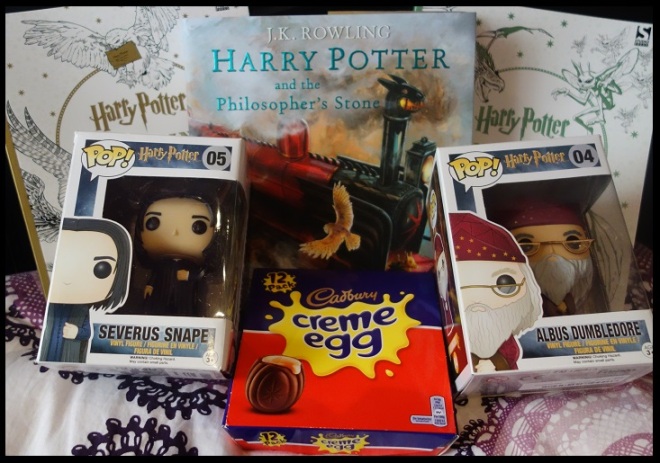 It feels like I’m doing more of these recent purchases posts recently but next week I should be back to normal posting schedule, I seem to finally be getting over this cold thing. I did plan another post for tonight but then this arrived in the post and I was too excited to look at them so had to post this tonight. Almost everything in this order has been going in and out of my basket on Amazon over the past few months and all of them happened to be cheaper at the same time so I bought them. I hadn’t actually heard of the Illustrated Harry Potter and the Philosopher’s Stone until a couple of weeks ago but I saw some photos on Instagram of an illustrated Harry Potter in amongst other Potter goodies so I had to look it up. I got everything in this post from Amazon.co.uk but they’re available in a lot of other places, I haven’t seen the Illustrated Harry Potter anywhere else but I haven’t really looked in book shops, I saw the price on here and just got it. 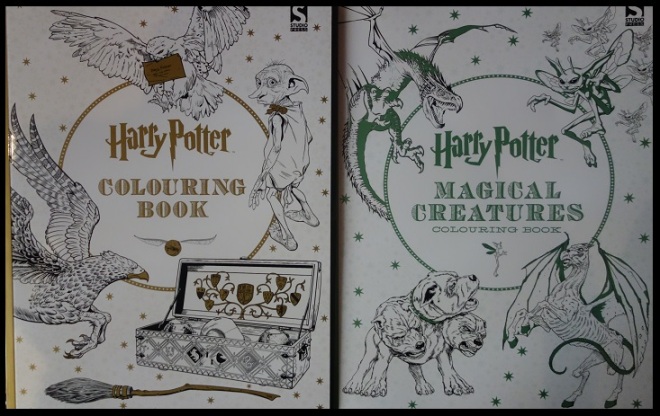 I have had a flip through the pages and there’s a good range of different designs in these and there seem to be different styles so I wouldn’t be surprised if they’re different artists going by the line thickness and amount of details in each. I’m not sure how much these are like the other adult colouring books I have as there are less pictures that are made of smaller patterns, if that makes sense, and it’s closer to a traditional colouring book. I do like the addition of some colour photos in the back pages that are stills from the films, what look like concept art for the characters or just colour versions of the pictures inside. I’ll do a proper review in the future but I am looking forward to colouring these in. 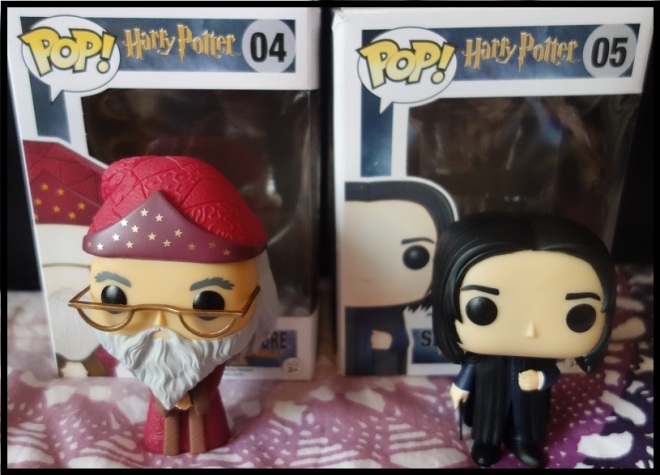 Over the past year Funko Pop figures from various franchises have been in and out of my baskets but when I saw they released Harry Potter ones last year I had to get some. I did originally have a Sherlock in the basket too but decided to wait to get one or two of them later when the prices were lower as they were more expensive than the Harry potter ones when I actually bought these. At the time they were around £9 – £9.20 but they seem to range between £9 and £11. I had to get Severus Snape as he’s my favourite Harry Potter character, or one of them, and I just really liked the way this Pop figure looks and how close to the character it is, not just the film version but also the version I had in my head before the movies came out.

I wasn’t sure about which of the others to get, I like the Hagrid one and the Voldemort one is quite nice but the main ones I was interested in were the limited editions like Harry in his Quidditch gear which are just more expensive though I have just found it on Amazon and it isn’t, I can see another order coming on. I am so glad that I got Albus Dumbledore, he’s so detailed and I really like his hair and beard for some reason. There is another version of Dumbledore which is closer to the style of Michael Gambon’s later Dumbledore a rather than this which reminds me of the way Dubeldore dressed when he was played by Richard Harris and I kind of want him now, I can see this becoming an expensive collection with all of the ones I now have on my wishlist. I’m not sure if they are meant to be based on the two different actors and the looks for them but that’s what makes them different to me. I will be reviewing these too at some time, I think the next couple of weeks might be fairly Harry potter heavy on Tuesdays and Thursdays. 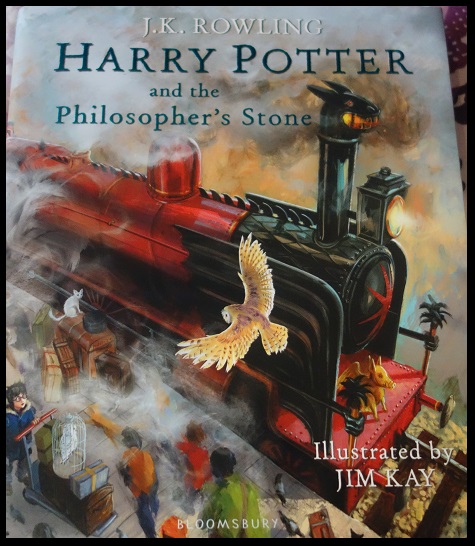 As I said before I didn’t know about the Illustrated Harry Potter and the Philosopher’s Stone until recently and I don’t think I would have got it if it was at its RRP of £29.99 but at half price for £14.99 I thought I’d get it as the illustrations I had seen were so pretty and just capture the whole world really well, for me anyway. 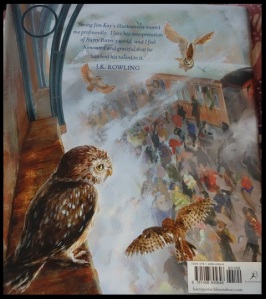 The main one that caught my eye was one of Diagon Alley, the wonky shops and the style is just how I imagined it before the movies and kind of reminds me of how I think some of the terry Pratchett world would look, it’s just an aesthetic that I really like. I am so glad that I did decide to get this, it’s so pretty and feels great quality. I’m going to have to read this and compare it to the original, I haven’t checked if it’s abridged or not, though as the pages are a lot bigger than the original and there are actually more pages than in my copy I think it might be the full story even with the full size illustrations on some pages. I am definitely looking forward to reading this, though I think that after the first read it’ll probably become one of those books I keep on the shelf and look at the pictures every now and again and I’ll stick to reading my original copy that’s still looking surprisingly good considering how old it is and how many times it’s been read. 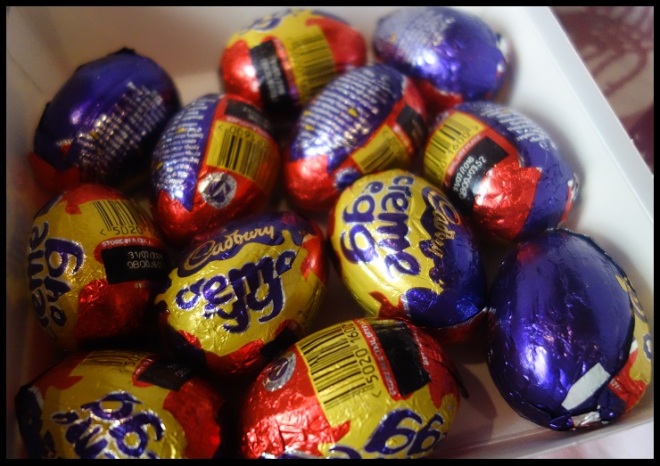 The last thing I added was a box of 12 Creme Eggs from Cadbury as I just love these and it doesn’t feel like Easter without them. I decided to go for a 12 box and I am limiting myself to just these this year. These were an add on item so they can be added to an order of more than £20 and I think it gets free postage then, I’m not sure how it works, but they cost £3 rather than £6.68 so I was happy with the price. I’m trying to decrease the sugar I have so these will hopefully last me a couple of months, which may sound like not that long but considering I can eat a bag of eight in a week most years when I buy them from the Cadbury outlet store it’ll be a challenge to make them last that long but when this box is gone that’s all I’m having this year. 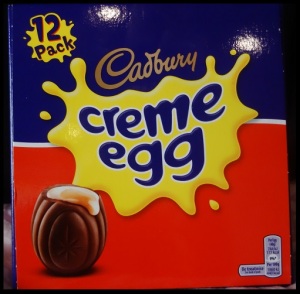 I don’t know how many countries have Crème Eggs and they’re quite hard to describe. They have a milk chocolate shell and then white fondant (I think they call it) inside which is pretty much gooey sugar with a bit of an icing sugar taste and there’s a bright yellow bit in there too to look like a yolk. They’re very sticky and messy to eat but taste so good and now I’m making myself want some. These won’t get a review because I’m not sure how I’d review them but I think they’re great and everyone should try one at least once.

I think this is the most themed order I have ever done from Amazon and I am so excited about these things, which is a bit odd as they’re books and figures but still. I am so glad that I found the illustrated Harry Potter book, though I did say when they started to bring out all these new editions of the stories that I wouldn’t be buying any of them no matter how pretty they were as I already had the stories but this is a bit different. I kind of hope they bring out more of them but I’m not sure it would be possible beyond book two or maybe three as they get so long that they’d probably have to break the story into smaller books and it’s get very expensive for each one.

Have any of you guys got these? What do you think of the colouring book style? I’m looking forward to trying it but I can see that some of the images may be less relaxing as they have large areas to colour in with one colour rather than making an image out of smaller ones. Do you have any of the other Funko Pops from the Harry Potter series? Or the Sherlock ones that you could convince me to buy? I am very tempted by Mycroft and violin Sherlock, or rather any of the Sherlocks but that one in particular stood out to me for some reason.

One thought on “Recent Purchases: A Very Potter Amazon Order”