Quite a few of my favourites this month are things I’ve used before but have started to use more again because of the change in my skin. I was taken off my medication and changed to a topical solution so it’s taking a while to settle down, if it does, and there’s a few products that give more coverage then I’ve used in the past. I am on the lookout for a good moisturiser with SPF my skin gets on with so of anyone has any suggestions, preferably SPF 20 or higher I’m going to be trying some in the near future.

I’ll put the few TV shows I’ve been loving as well, I seem to do this every month. I have seen the new X Files and I know its not far in but I do really like it, will be interesting to see where it goes. I watched quite a few if the old ones over the past ten years when they were on in the middle if the day and I didn’t have anything to do and I really liked then, I’m going to watch some of them again from the beginning I think. NCIS is always a favourite for me and I watch it with my parents, this season is still good though there have been some weaker episodes. It’s always a bit odd watching these so much later than in the USA, the Halloween episode was only a couple of weeks ago. We started watching this late as we recorded it on Sky+ which is why it’s in February rather than earlier. Also loved Vera and Midsomer Murders, a couple of good UK detective shows though Midsomer Murders must be running out of people to kill in those small villages!

Sorry, my camera does not like it when I include my iPad so it’s a bit dark on the rest

Kind of a similar theme I’m including these two albums as I’ve loved listening to then, mainly a couple of songs on each but I’ve kind of been listening to them since December so I guess they should have been in my last monthly favourites but they’ll go in this one. The Nu’est Bridge the World album is good, its mainly Cherry and Shalala Ring but the others are good. This is a Japan album from them and  are some songs in English as bonus tracks on this version of the release, which feels a bit weird to hear them sing in when you’re not used to it but I still like the songs. Can’t wait for the new album to arrive whenever it gets here, hopefully the next couple of days. The o her album, or EP, is DNCE Swaay which I have listened to on repeat. I’ve only really listened to Cake by the Ocean and Jinx it, I’m not so keen on the other two songs but they’re still ok and I listen to them a bit. I love how upbeat these songs are, though they do make me think of summer more than winter.

The first of the makeup things I think has been in a previous favourites but it’s the No7 Instant Radiance Under Eye Concealer in the colour 10. This is fairly expensive for me for a makeup product at £13.50 from Boots but it works really well and is the product that got me back into No7. It’s great at concealing the darkness under my eyes as it’s meant to but I have found it works fairly well as a general concealer. I don’t plan on using it for that in the future but as I don’t have one I like at the moment it’s a good stand in. 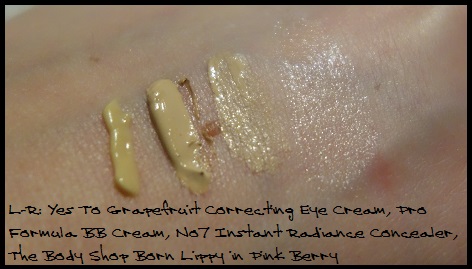 Another No7 product is the Foundation Brush, I did a proper review on it here but I didn’t think I’d be using it that much. I have used it with the Pro Formula Radiance BB Cream from Tesco in light, another of my favourites this month. It’s great for colour correction and a bit of light coverage. There’s SPF 15 in there too and, although it looks darker than my skin before its blended in it turns a lot lighter when applied to match my skin well. The brush just makes it a lot smoother and really easy to ally, it does tend to apply it thicker but it’s not noticeable and still the product sinks in well without leaving a film.

I have also been loving the Naked 3 palette, though I did find myself using more of the pink tones in it this month without realising it around Valentines Day. I did post a FOTD type post with the look I did a few times on Instagram. The colours I mainly used were Strange, Dust, Burnout, Buzz, Nooner and Liar so basically the pinkest colours in the palette. I liked the outcome and I might go for more pink based shades in the future, I normally stay away from them as I’ve not had the best luck with the looks I’ve done in the past with pinks. 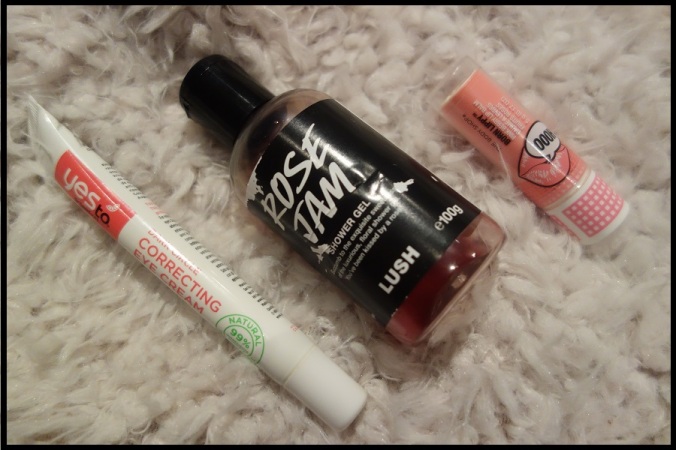 The Lush Rose Jam Shower Gel was a limited edition over Christmas and it’s such a nice scent. I have used two of these bottle already, I only got the smaller ones though I wish I’d got one of the bigger ones now. It’s a great sweet sugary rose scent that reminds me of Turkish delight but sweeter and more subtle. The only problem I have with this product is the bottle, or more precisely the label, as it’s been scratched and coming off since I got it and I’ve not had that happen to a Lush shower gel before this Christmas but now it seems to be happening to a few of the products with these black labels. They have a bubble bar available in this year round which is nice but this product is so versatile I wish it was a permanent product.

The other two skin care kind of products that I’ve loved are older products, I got the Yes to Grapefruit Correcting Eye Cream last year some time and I think it may be in a past monthly favourites but it sort of got lost amongst the other eye creams I had. They’re gone now and I tried this again and I love it. I’m still not sure how much it actually corrects the darkness under my eyes but it’s more pigmentation than proper dark circles so it might not be expected to lessen it. It does make my skin feel so nice and it makes a great base for the concealer to stick to. The Body Shop Born Lippy balm in Pink Berry is one I used to have all the time but I recently had so many lip balms I didn’t buy it for ages and then I had this unopened one that I found and have used the past couple of months. I just love the formula, it works so well for my lips and moisturises them a lot more than other brands I’ve tried. This flavour smells a bit of rhubarb type scents for some reason, it’s a berry scent with a sharpness, maybe like cranberry products. It’s got a subtle sheen to it that just makes your lips look a bit shimmery without being too much.

It fits the ring finger on my right hand, though my hand looks a bit of an odd shape in this picture for some reason. I like how simple it is but there’s a bit of sparkle

The last thing is a ring that my parents bought for me last month as I got the certificate proof of my degree (officially it was done on the 31st December last year but I didn’t get it till the beginning of February). It’s from Pandora and I love it, I always go for silver rings and this one fits my finger perfectly on my right hand. I think I’m going to get some fairly plain stacking rings to wear around it sometimes as it’s the kind that I think will look nice in a stack and I might be able to wear it with one of my others too then, they do have some nice stacking rings on Pandora, I might be putting some on my Christmas list this year though it feels a bit early to be thinking about that.

It feels a bit weird looking for a present on the site to be able to give you guys the price but I couldn’t actually see it on there. It was only bought recently so it’s probably still available in stores even if it’s not online. I don’t have the name of the model of the ring but it’s sterling silver and has little clear gems in it. I ended up going through my rings and getting rid of some of my cheaper ones that have become a bit green or the gems have fallen out. I think I might do a post later this week with my favourite jewellery, some if it’s fairly new and some I’ve had for years but I do like seeing what other people wear so it’ll be something different to post about on here.

This week, and maybe next week, my posts are going to be less as I’m still getting over the cold. At least it’s actually just turned into a cold now but it’s still not fun and I have pretty much no energy most of the time so it’s been days in bed with Lemsip, my duvet and old movies and TV shows that I seem to sleep through half the time. I hope you liked this post, I love reading monthly favourites as they show what people actually use or like more than reviews do, plus I’m just a bit nosy sometimes.