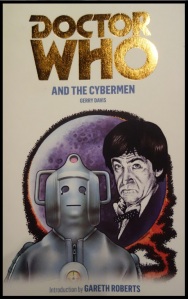 Title: Doctor Who and the Cybermen

This is another book in the series that the BBC rereleased in 2011 from the original Target Books run first released in 1974. Like the others this has the additional parts of the Changes Face of the Doctor that explains the incarnation of the Doctor and a bit about each of his companions, a foreword by someone related to Doctor who written in 2011 and, at the end of the book, some information on the authors and a section that explains any differences between this and the original script shown on TV and anything that might need explaining to a modern audience.

This book is about the Second Doctor, played by Patrick Troughton and his companions Polly, Ben and Jami. As with the previous books I reviewed in this series this one was based on a serial from the TV series called The Moonbase, this time being four episodes long, it showed from 11 February – 4 March 1967. Here’s a link to the Wikipedia page about it, don’t read it if you don’t want any spoilers for the book though! Two of the four episodes still exist on film, 1 and 3, but 2 and 4 have only got the audio recording available. This story is the second time that the Doctor has encountered the Cybermen on the TV show and the image on the front of the book isn’t the same as the ones that would have been on the screen at the time, these are later versions.

I’ve said this for the previous two but I do really like the design on the cover, the black and white image of the Doctor with the colour image of the Cyberman stands out to me and I like the contrast. I like the gold foil effect of the Doctor Who logo and the way that they used a cream background rather than pure white. I’m not sure if this is the case with the original books or if they chose it to make it look older, but it does make it look more like it might have been around from the 70s and has just faded to become this colour. I just realised when looking at this book that the image on the back, the circular design that reminds me a Celtic design for some reason, is the same as on the back of the other five in this series that I have which ties them in nicely together.

The added extras in this book are nice, they feel like they really tie in with the book rather than just being something that they’ve added to make it a bit different. I like how they describe the Doctor and his companions and where they are in their own story in the TARDIS. It’s especially useful if you don’t know them as well and describes the times they come from so it sort of explains some of their reactions to the alien things better. The foreword is a nice story, or that’s how it feels, about how Gareth Roberts thinks Gerry Davis would have felt being asked to write a book based on a script he had edited eight years earlier. It’s nice to read but doesn’t add as much as the Changing Face of the Doctor does. The bit about the authors says about the background of the authors and how they came to write this story and how they chose to write which does add depth, especially knowing that a scientist was involved so this was how they thought it could be in 2070when the story is set. The final section does explain some differences between this book and the original script though I doubt many people would notice them even if they’ve seen it. The main thing is the addition of the black headed Cyberman leader, the rest are things like changing a bit of the script, giving an unnamed character a name or changing which of the characters did something.

The story itself is set in 2070 so there’s a lot of things in it that they thought might happen by then in true classic science fiction style that probably won’t have. The script was written originally in 1967 when no one had even landed on the moon so it must have been even more futuristic then. When this book was written it was five years later so it was less amazing maybe to have people on there but a Moon Base would still be impressive. There are the standard things in a Doctor Who story; people not believing the Doctor, alien technology and the Cybermen are a classic Doctor Who enemy that any Who fan will recognise no matter what version they’ve seen. All of the story takes place on the moon and it’s fairly contained within the base for the most part. It’s manned by people from Earth so there isn’t alien technology until the Cybermen turn up, it’s just advanced Earth technology that the characters, apart from the Doctor, don’t recognise. It does feel more like a Doctor Who story that would be familiar to fans of the current series than the other two I have reviewed as it’s based on somewhere besides Earth and has an alien and science fiction feel throughout.

There’s a bit of a prologue giving the Cybermen some history though it’s different than the original one. I think by now there are so many alternate dimensions and different Cybermen stories one more won’t be obviously different. It does introduce people to them who have never heard of them before and what they are as a species. The story this time did take a little bit longer to get going, at least for any action to start, though you get the idea of things to come as soon as the TARDIS lands and the description of the area. The story does sort of start properly around page 24 when the Doctor and his companions arrive in the Moon Base so I guess it’s fairly early, it just seemed longer as it’s quite description heavy at the beginning. I guess that’s mainly due to the fact it is a futuristic place so it’s going to need more describing than the monks’ temple in the last book or parts of the world in history. The story itself is pretty fast once it gets going, there’s a bit of suspense at times and some violence though it’s not the same level as the other books so I’d say it’s safe for children to read as long as they’re not likely to be scared by the Cybermen themselves.

Language wise I’d say this one isn’t too obviously dated, there are some words that wouldn’t likely be used now but everyone would understand the meaning of them. One thing that did stand out to me in this one was how they seemed to try and make Jamie seem more Scottish accent wise, and sometimes awkwardly so. It may just be the people that I know and from things I’ve seen but it seems odd to stick a random ‘aye’ in the middle of a sentence, for example ‘But I’m aye better’ just feels odd from what I’m used to. Maybe someone who’s Scottish could explain that to me. I think that Jamie’s speech is probably the only part that might be harder for people outside of the UK to understand as there are a few parts where he uses words that are used in Scotland like dinna which are in context so make sense probably even if you’re not used to them.

Throughout the book, like with the others in the series, there are illustrations that go along with the story. These are definitely stylised and remind me a lot of the illustrations in books when I was growing up that were probably written around the same time, probably the 60s or 70s. There aren’t that many in this book but they show the Cybermen as they were at the time of the TV series really well so you don’t have to imagine them. They’re pretty different from the one on the cover and the ones in the current series but they’re still recognisable with the bars on their heads and the control unit in the middle.

Overall I think this is a pretty good book. It’s not a long book at 174 pages including the extras but it does go at a fast pace and there’s plenty of action. I read it all in two sittings, maybe it took three hours to read through it. It is split into fairly short chapters, ranging from 4 pages to 22, though the splits are in good places so you can get to the end of one and put it down if you want. There are some points where it slows down a bit, I would guess these may have originally been between episodes but there are definitely cliff hangers at the end of a chapter which may be where they left it to tune in next week.

Although this book was written for children I think that fans of sci-fi that’s action and robot based would like this even if they aren’t too familiar with Doctor who or the Cybermen themselves. As far as age range goes I’d say maybe around 9 or 10 might be the age you’d start reading it, I’m not sure as there’s nothing too complex and I’m just going by when I read my first Doctor Who book, or guessing when I did anyway. There’s not much gore though, as there are Cybermen, there is some violence and killing but it’s not really described much beyond it looking like electricity. I’d say the thing that would put off younger kids would be the Cybermen themselves and the lurking in the shadows part.

As well as kids who might like this genre I think that fans of Doctor Who of any ages would like it, even if they’re not that familiar with the classic Who series. It’s a quick read so at full price, aside from collectors, I don’t think it’s worth it but if you can find them in a set like I did on eBay for around £8 for the six of them then it is. It’s probably one to look for in libraries or second hand stores rather than buying new but it is a nice read and a good introduction for anyone to the Cybermen. As far as I know this is the earliest Cyberman story to be put into book form so it does introduce the idea behind them.

I would recommend this book as a good one to read if you like fairly action and suspense based sci-fi stories that move pretty fast and you don’t mind them not being very long even outside of the Doctor Who universe. For any Doctor Who fans it’s worth reading even if it’s just to read an early story from the original TV series.