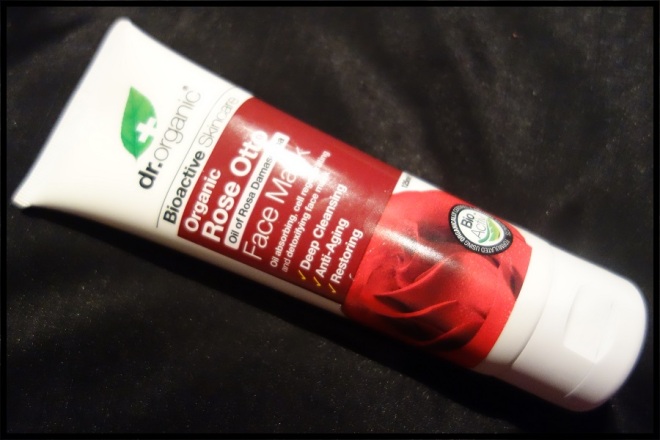 This is part of a gift set I bought in the Boxing Day sales from Holland and Barrett, it came with a face serum and a face scrub and was in the buy one get one for 1p so I basically got it for free with my Snail Gel set. Normally this can be bought on its own for £7.49 and within the UK it is only available in Holland and Barrett, at least Dr Organic claim to be exclusive to them. This face mask is both vegan and vegetarian friendly as well as not being tested on animals.

The whole Rose Otto range has a nice rose scent, it’s fairly sweet and light and really reminds me of the scent of Turkish delight. The general benefits from the Rose Otto range claims to be anti-aging, though the ingredients are also moisturising and oil reducing, at least in the face mask. It includes china clay, aloe vera and chamomile which will help to reduce redness and should calm your skin and possibly help if you have acne prone skin (from past products I’ve bought with these ingredients in anyway), though it doesn’t seem to be aimed at that and says it helps to reduce pores and stimulate circulation to make your skin look younger.

The packaging for the whole Dr Organics range is fairly standard though the different ranges each have their own theme even if the layout is the same. The Rose Otto one has a rose on it and a red and white theme, it’s nice and simple and the tube itself is squeezy enough for there to be no problem getting the product out. The lid has a hole big enough for the product to come out in a controlled way but you can’t get the lid off, either that or mine is very well twisted on. I do kind of wish you could get the lid off because near the end this normally helps get the last bits out of it but I think this tube is soft enough that you can cut it pretty easily to get the last of the product out.

The tube is 125ml and is the same as the full size product. It does say that this is supposed to be used twice a week as part of your skincare regime and it doesn’t really take much at all per use to cover your face so I think this will last you quite a while even using it as often as it says. The amount in my hand in the photo is how much I used on my whole face and it seemed to be a thick enough layer to give the desired effect. I have only used it twice but there’s no obvious difference in the feel of the tube. 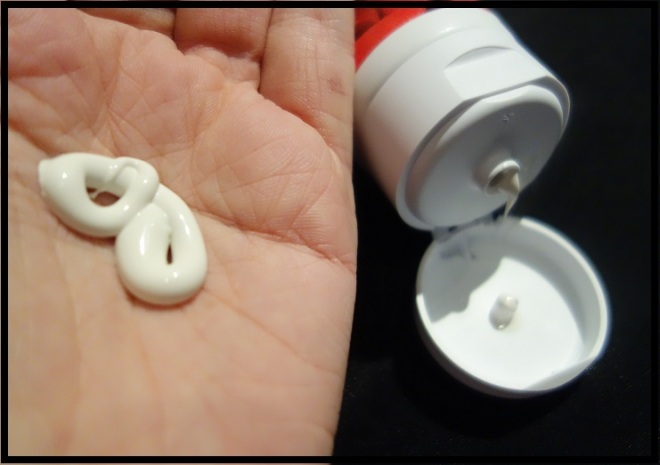 The product itself is a bit of a weird consistency for a face mask, it feels a lot more like a face cream or maybe like the Vitamin E one I got from Superdrug that’s one of the leave on ones that you don’t remove at the end. This is thin enough that you can spread it pretty evenly and a thin layer is enough for it to work. It does start to dry up pretty quickly once you’ve got it out of the tube and thickens quite a bit within a minute if you put it on your hand first. It’s easy to use and, although you do feel it drying up on your face, it doesn’t make your skin feel tight while you’re wearing it. It has to be on for ten minutes and it’s only in the last few that it becomes really dry like you’d expect of a mask with clay in it. It’s also easy to remove at the end, either with just warm water or with a flannel, I didn’t have to keep on splashing it with water.

After using the face mask it did make my skin feel nice, it was a pretty immediate effect, and it left my skin feeling smooth. It did seem to be a bit rich to start with as my face felt a bit oily for about half an hour then it calmed down, I don’t know if that was my skin overcompensating for the oil control aspects of this face mask or why it happened but it still feels nice now hours after the last time I used it. This sounds a bit weird but after I used it, when I was wiping my face afterwards, I could see the dead skin coming off which sounds a bit gross, but it shows that it did help with removing dead skin cells. I will admit that the past monthve been less consistent with my skincare routine because of various things and that’s probably why. I can see how this would be a nice addition to your skincare routine a couple of times a week but I think that it might be a bit rich for my skin so it’ll be a once a week thing for me.

I think that this is a nice face mask, it’s not one I have ever heard of before or seen on blogs, though I have used their dead sea face mask before and have seen that around, maybe it’s the focus on anti-aging that’s made this less well known. I can see the smell of this putting people off as it is definitely rose scented and probably the closest to Turkish delight of the three products I have in this range but it’s not noticeable at all once you remove the mask and it fades as you wear it so I didn’t notice it at all at the end. If you don’t like rose scented things though this is one to avoid.

My skin is dry, or very dry according to some face products that work for me and people I have talked to who know about skincare, but it’s also very acne prone and sensitive so I’ve found it hard to find a skincare company or range that works for all the aspects of my skin as they pretty much contradict each other. I was very impressed with this and so far I love it. I tend to find face masks a pretty instant fix for skincare which is why I’ve done this now rather than after trying it for over a month like I would with others. I can see this becoming something that I use fairly often, not as regularly as they recommend but definitely at least every couple of weeks even if not every week. It does feel nice and easy to use and I would definitely recommend it if you have dry skin.

I’m not sure how good it would be if you’re sensitive to perfumed things as, although I didn’t react to it, it is very scented. The ingredients are mainly natural and the parfum it mentions in the ingredients is natural and food grade so maybe that’s why I didn’t have a problem with it but if you do have sensitive skin it’s one I’d recommend trying on your hand a few times first like I did just to see how your skin is with it.

At £7.49 for this big tube I will definitely be looking at this again when I finish it and will look into the others that they do as I have been impressed with both of their face masks I’ve tried so far.