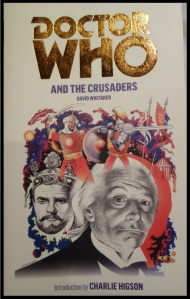 Title: Doctor Who and the Crusaders

I haven’t been reading that much over the past month or so besides the Christmas Carol book which seemed a bit seasonal to review now, maybe I should anyway, would people want me to now it’s past Christmas? I’ve finally started on my pile of books I have bought and not read, the first lot being a set of Doctor Who ones based on the first three doctors that I got from eBay. This book is about the First Doctor as portrayed by William Hartnell and was published originally in 1966.

This book is based on a three episode story arc written by David Whitaker that was shown in 1965 though apparently there are a few alterations like giving lines to other characters, skipping some scenes and making alterations to others so it works better as a book rather than with a TV series. This copy of Doctor Who and the Crusaders is a reissue done in 2011 though it is true to the original with an additional foreword and a Between the Lines section at the back that explains some bits including some errors between this book and the original TV series, the best of which is probably saying that Susan left the Tardis to marry David Cameron rather than David Campbell.