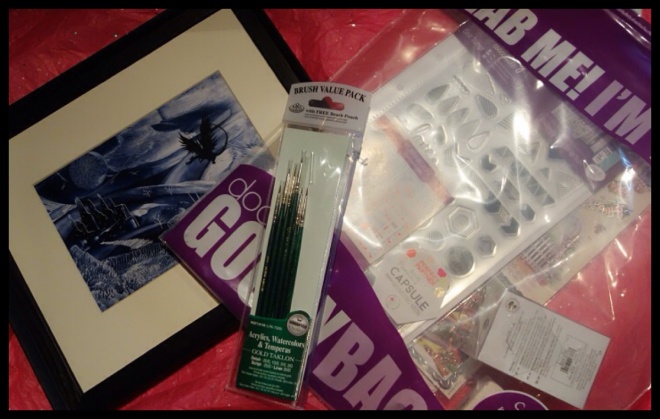 I’m not sure whether The Range is an international store but in the UK it sells pretty much everything to do with the home and gardening like décor, furniture, plants, pet supplies, arts and crafts bits and lots of different foods, I just saw some American chocolate in there this time I haven’t seen before. The main things I’ve bought are art and crafty things as they have good names for less than other stores I’ve bought from and their picture frames are great value and so far all of the ones I’ve got are good quality.

The main thing I went in for was a picture frame for a piece of art I got for Christmas from mum and dad which I love but it did need a frame to put it up on the wall. I did end up almost getting some more wall hanging things as they have some great metal ones with antique looking signs on them and some really nice mirrors. When I move out I’m definitely going there for bits. I also ended up looking in the art and craft bit and got a set of brushes and a discount card making set which was half price. They do have an online store but there isn’t the same range as available in store as I can’t find either the paint brushes or the goody bag, though they do have a lot of picture frames and home décor bits on there. 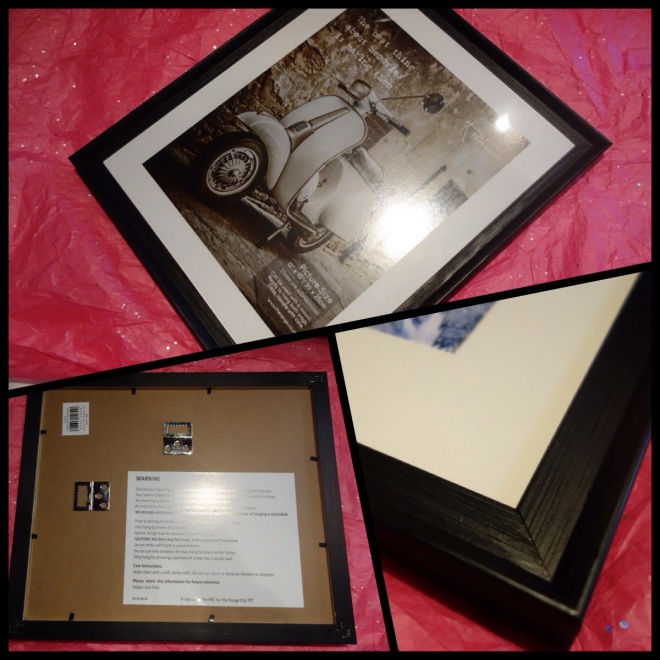 The main thing I went in for was a picture frame, I was looking for a plain black frame to go with the art I already had. I decided on the Padstow one which is available on their online store and the 12” x 10” is £3.69 which is great value for the frame as it’s a nice finish. I know it’s not the same quality as if you were to pay a lot of money to get it frames specially but I didn’t really need that and this has a really nice finish with the wood look and texture that’s been stained black. 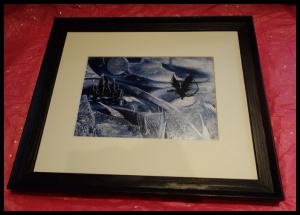 The backing is made with chip board and is pretty strong, or as strong as you’d need it to be. There are two places to use to hang it on the back so it can be hung either portrait or landscape. They’re metal and have a zigzag on the part where the nail hangs it so there’s good grip, I have others from them that are bigger and they don’t slide off centre, they’ve been hanging for over a year. The frame comes with a glass front but I didn’t use it as the art is made with wax and apparently it’s best not to use a close glass front for that. I did forget to take a photo with the glass in so the top photo is with it laid on top but it shows you what to look out for with the scooter picture as well if you want to get this frame. I’m definitely happy with this, I love the look of it with the picture in and it’s a nice simple black frame that would work pretty much anywhere. 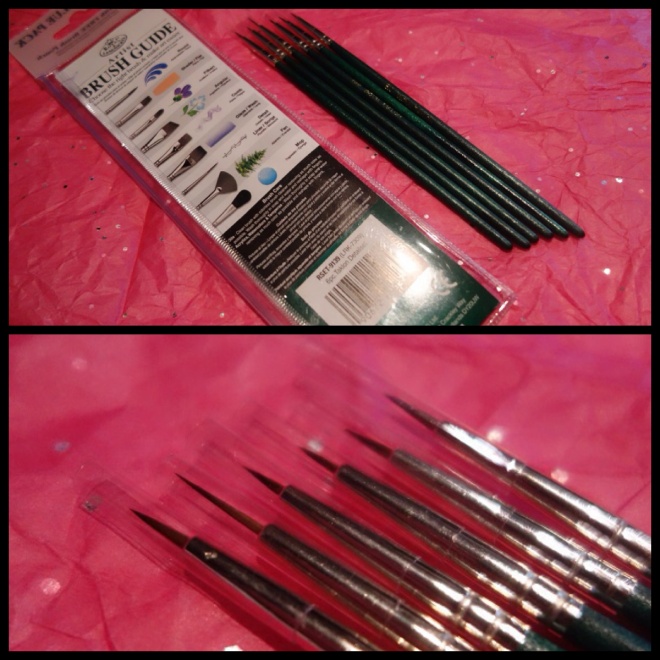 The paintbrushes are just ones that I like, they cost £4.99 for the six so they’re pretty cheap but not the cheapest. I prefer to have a range of brushes and go for cheaper ones, these Royal & Langnickel brushes are not a brand I had heard of before going into the Range but I’ve had a few packs of them with various styles and sizes and they work really well with acrylic paints. I have tried them with watercolour too and they worked well, especially if you want it to be a very pigmented colour as they don’t absorb a lot of the liquid like I’ve found with some of the cheaper ones in the past. Sometimes the ferrule can come detached from the wood handle but I’ve found pushing it back on holds it well enough and it’s only after a lot of use. Overall good quality for the price and I needed some of these more precise ones as I find these tend to go more often no matter how much I spend on them. 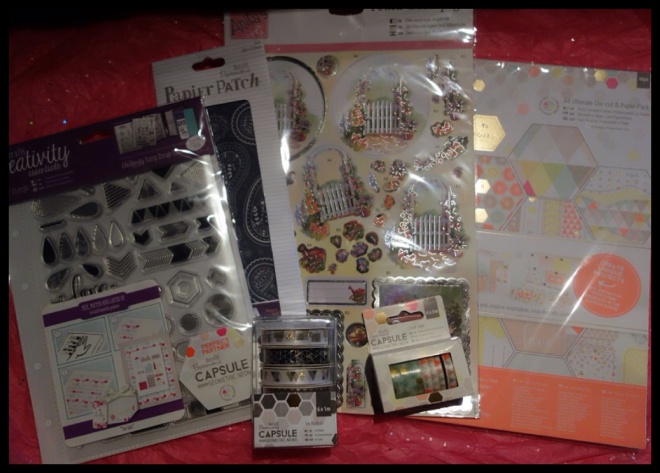 This big goody bag from Do Crafts seemed like a really good deal, it says the contents are worth over £30, though I haven’t priced them all separately. The Range had a few different kinds of these goody bags, this one has the code GDY0116 on it so I’m guessing that’s the first of 2016. I chose this particular one as it had the ribbons, clear stamps, papers and washi tapes which were things I thought I would use more than the contents of the others.

The set includes a pack of paper which has some stickers with letters, some normal printed paper, some slightly plastic and frosted paper and quite a few sheets of die cut paper and card including things like gift boxes and envelopes or shapes that will be good for card making. Almost all of these sheets have some gold foil on them in some part of the design and the die cut pieces have some great shapes and patterns and some have words already printed on them, either in gold or other colours, which really helps me as my writing isn’t that great and I’m always looking out for nice fonts on these things.

The writing on the paper is actually a similar, or the same, font as the couple of words on the stamps, the ‘love’ word is exactly the same as one of the printed pieces of paper. The other stamps are geometric shapes that can be used for any design, they’re not season or celebration specific.

The washi tapes come in two designs, there are two of each and they both fit in well with the paper, you can tell this set was put together as one with the exception of one of the things in it. I like the colour combinations used, the orangey, gold or muted yellow and white in this tape stand out and work well. The other tape is a turquoise with honeycomb hexagon shapes on it, I’m definitely going to be using these in my organiser.

I love using ribbons on cards, I’m not sure why but it’s a bit of a phase I’m going through maybe, and the six different designs on the ribbon in the pack are very striking. I also like the fact that as they’re geometric shapes they can be used for cards for anyone, it’s not got any hearts or pink in it which seemed to be a theme in a lot of the ribbon sets I’ve seen on at least one ribbon in each so this having none was great. I really like the gold accents too, I might use the ribbon as an accessory as well to wear not just for cards.

The deco sheets and the sticker sheet are the two things that stand out as different in this pack and I’m less keen on the patterns though I do still like the paper. The stickers are all garden themes, they’re soft colours with designs like flowers or gates with pretty flowers behind them which are nice but a bit more generic than the rest of the pack. I do like the silver accents in the pictures but it just doesn’t seem to go with the rest of the set. The deco sheets are designed for decoupage, which I don’t do, but I might be using it on cards or to cover boxes and things as I do like the design and it could work well as a home made gift box as they tend to give a sort of papier mache effect, I haven’t used this make before but I’m going by some others I’ve had. This design is nice, it’s a navy with a white paisley design on it (I think that’s what you’d call it). It feels like good quality for this paper and could be used as tissue paper for wrapping a present if you wanted as well.

Overall I’m very happy with everything, it’s a bit of a different post from me but I thought I’d do it anyway as I do love crafty things and I think I’ll try to do more posts about them this year. I definitely recommend looking in the range if you want some arty things, they have some great prices on paints, or picture frames.