I got this book for Christmas and have been colouring it in since so thought I’d do it as one of my book reviews. I wasn’t planning on reviewing many of my Christmas presents as it seems a bit odd sometimes to review something you’ve been given but as I know a lot of people like these colouring in books I thought I’d share what I think so far. When I first saw these adult colouring books I wasn’t sure if I’d like them since I’ve not been a fan of colouring but it’s surprisingly relaxing and fun when it’s these designs with smaller patterns inside a bigger image.

This books is by Millie Marotta who has a range of books out, I think they’re all based around animals and the natural world and they have a range of pictures and repeating patterns to colour in which have smaller designs inside them. This one is based on images of the animal kingdom, as the name suggests, and there’s a range of pictures from underwater and land animals. Some of them are full images like trees with birds or a page with leaves and insects and others have an animal in the middle with empty space around.

I like these books as they have a front cover design that’s similar to the pictures inside and it includes some parts that have been coloured in already along with some parts coloured in with gold foil. The cover isn’t a paper or card finish so I don’t think you could colour in the outside of it, the inside folds out but is even shinier so you’d need certain pens to be able to colour them in. The back cover is just the black outlines of the images and patterns with a bit of a description about the author and book.

Size wise this is a fairly large book, it’s the same size as the Enchanted Garden book by Johanna Basford, which seems big to me but is a fairly standard size for adult colouring books. It’s slightly larger than the shorter side of an A4 piece of paper and it’s square so it’s the same dimension all four sides. It’s not something you could just pick up and put in your bag to carry around unless you use a large one. I don’t mind this as I only really colour in at home but it might be something that’d affect whether you want the book.

Inside there are a couple of pages with a bit of a description about the book by the author and some ideas on how to colour some bits in which might be a nice way to introduce someone to colouring in as the patterns are very intricate in parts and it suggests just colouring over those bits if you want rather than filling in each if the individual parts of the pattern. The paper for this book is fairly thick and feels good quality, it has a normal paper finish to it like printer paper rather than the rougher texture I’ve seen in some colouring in books and it’s pretty close to white in the background which is good for the colours to stand out on, my other colouring book has a slightly creamer colour to the paper.

There are 90 pages in the book to colour in, or 45 if you count them as double pages, including a double page at the back that says you can design your own picture to colour in. There aren’t 45 images as some are single page pictures while others take the double page, especially the repeating pattern ones, so I’m not sure on the exact amount if images as it depends on what you count as one or two. Most of the images are simple colour in yourself pictures but there are some pages that leave areas in the picture blank so you can add your own patterns. I really like this idea and will be drawing the lines in with fine liner so they’re as striking as the original art is. There are images on the other half of the page that are very similar to the one with blanks if not the same so you have some inspiration if you can’t think of anything to draw in there. A lot of the pictures have a blank page around them, such as a deer made with smaller patterns and a white space around it, that you could add your own background to if you wanted as well. I might do this in the future and see how it turns out. 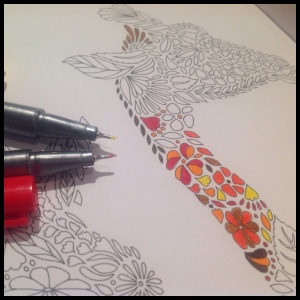 When it comes to colouring in I’ve tried both fine liners (mine are Staedtler) and colouring pencils to see how they both work as I like both finishes and I’d like to know if I can use them both in the book. I found that the fine liners did give a nice brith finish and didn’t really bleed or show through even going over the same part multiple times so I’d say this is a good book if you like to use pens for colouring. Using pens does limit the amount of colours you can use but they pictures are very bright and stand out a lot. I found that with this book and the smaller parts in a lot of the designs (the dots on the giraffe are a good example) fine liners are easier to use to stay inside the lines. The colouring pencils worked well and I do like the final look of those parts but I did find some bits harder to colour in with that so the colouring that section as suggested by the author might be a good thing. I’d rather stay inside the lines but I’m not that bothered and I like the white background in the images so I prefer to try and fill in the pattern bits. Either of the mediums worked well and gave good results, the paper’s smooth and easy to colour on and it’s very relaxing to use this book. 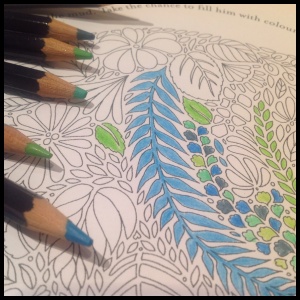 I think that this book is great, it has a nice range of images and patterns to colour in and there aren’t any larger spaces so it’s definitely one you can pick up and put down for as long or short time as you want. I tend to find that I colour in each image with a colour scheme, not necessarily anything to do with what the picture is of though, so these with lots of little patterns mean you can use a range of colours and end up with a bright picture even if you’re only using say pinks and blues. I think the paper quality for these books is really good and there was no bleeding when I used my fine liners, either outside the lines or through to the page on the other side. If you like animals and these sorts of colouring books where it’s a lot of smaller patterns and quite intricate designs then I think this is a great book to check out.

I think Millie Marotta’s books seem to be fairly popular as I’ve seen them in a lot of arty or stationery stores near me so they should be fairly easy to find. I haven’t seen inside the others but if they’re like this then I think the rest of the range should be good as well and there are more specific themes like tropical animals that could have a big range of colourful designs in them too so they might be worth looking for.

Considering I wasn’t sure if I was going to get into these adult colouring books I’m a bit hooked now and am starting a list if the ones I want to try. I think most of them seem to be themed around things I like like the Doctor Who, Harry Potter and Sherlock ones but there’s also an Alice in Wonderland one I like the look of from Puffin and some of the general themed ones by Millie Marotta and Johanna Basford. Are the any you’ve got that you’d recommend? I think by the end of this I’ll have more books than I can colour in!

All images from the book are copyright Millie Marotta.