Throughout advent I am going to try and get two posts out every week day, the advent one which is a sort of mini review or first impressions for the products I get in the advent calendars and the post that would normally go out on that day too. The weekends will be just the advent calendar posts as I don’t normally do anything else on the weekends at the moment. 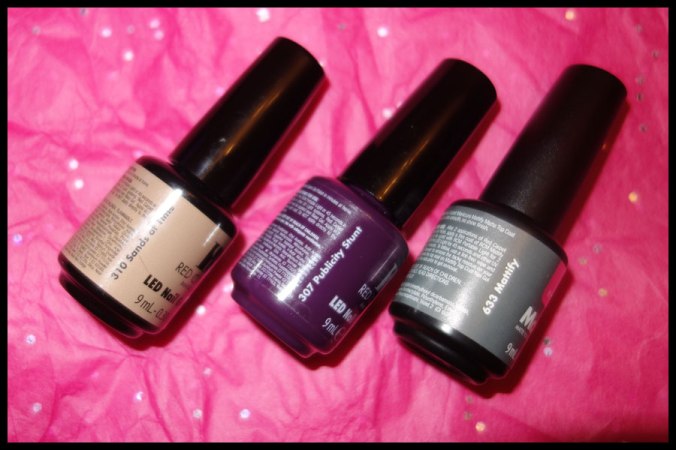 This is probably the third or fourth review I’ve done on Red Caret Manicure gel nail varnish products and I do really like the finish they give. I have never seen their matte nail varnish before and I also bought a couple of others to replace ones from other brands that just didn’t work with my UV light.

These are all nail varnishes that need a UV light to set and they’re supposed to last two weeks. The colour nail varnishes; Publicity Stunt and Sands of Time are both £13 and the Mattify top coat is £15 in Marks and Spencer. I think in general this is around the same price as in others as I know when I’ve bought them off Asos it’s been around £14 for the colour nail varnishes. 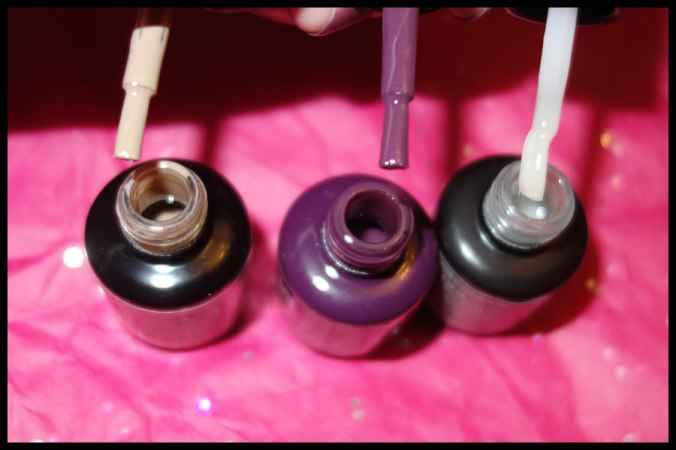 This photo with the flash shows the Publicity Stunt colour (in the middle) a bit better, it sets darker and more plum coloured than this but this is true to in the bottle

I love dark purples and reds in the winter so I got a plum, Publicity Stunt (307) which looks like it’s a really dark plum colour in the bottle. When I applied it it takes two coats, like all of the RCM gel varnishes I’ve tried, and has a nice finish but it slightly lighter than I expected. I’ve had the purple on for nearly two weeks and so far they’ve survived pretty well, two finger nails of varnish have peeled off but I think that’s more because I wasn’t careful enough. 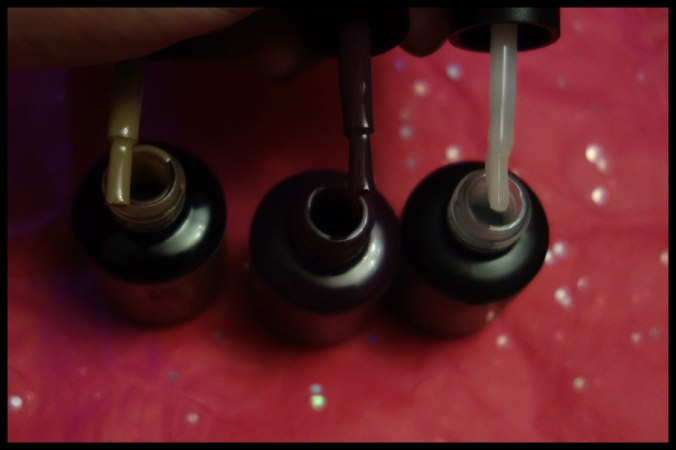 This shows the Sands of Time (far left) closest to in real life. It sets a bit paler than this and can get darker around the edges after a while and return to this colour

Sands of Time (310) is a really nice nude colour, it’s sort of a sandy colour rather than a pink based nude but I think it’s one that would suit anyone. One coat makes it look patchy but with the second coat it’s a nice even finish. I think it’s opaque enough with two coats but if you want to not be able to see the line where your nail grows beyond the nail bed, the part where it goes white, then you may need a third coat as with two you could see this faintly. I did mum’s nails with the nude colour and that’s been two weeks and just one nail has gone so that’s survived well too. 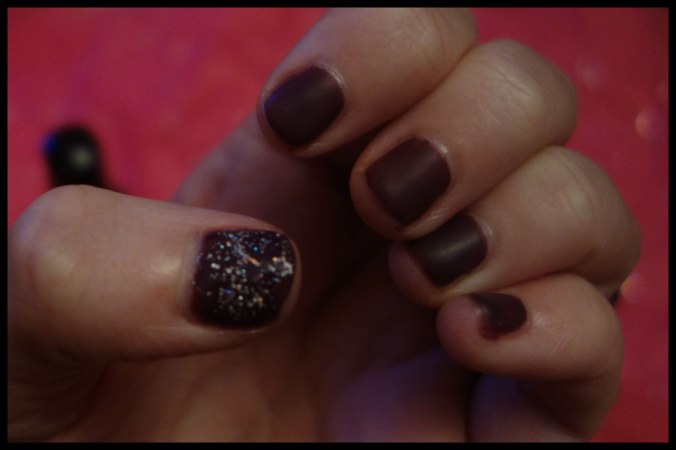 Four nails with Publicity Stunt and the Mattify top coat, the thumb has Put a Slipper on it glitter from the Cinderella collection and brilliance top coat

The final one is the Mattifying top coat (633), I do love having matte nails in the winter and have recently been using my Rimmel matte top coat quite a bit. I have used that in the past on top of a gel nail manicure to give that matte finish but it rubs off fairly quickly and unevenly so when I saw this on the website I had to get it. In the bottle it looks slightly creamy rather than clear so like other matte top coats I’ve seen and it looks clear when you apply it. As it’s the top coat you put it on last and, before you use the finishing liquid you use at the end of the gel manicure it’s still shiny so I was a bit disappointed. As soon as I’d finished wiping it though I was surprised at how matte it was. It also made it matte without altering the colour at all, which I know it’s meant to do but I find that most nail varnishes end up a bit darker with the Rimmel matte top coat.

I know it’s because they can’t be exposed to sunlight but I do like how the bottles on a lot of these is the same colour as the nail varnish itself. The Publicity Stunt uses this method and it makes it really easy to see where it is in the box of nail varnishes I have. The Sands of Time bottle doesn’t, I’m not sure why, but once you’ve picked the bottle up it’s a pretty accurate representation of the nail varnish inside. Even the mattifying top coat uses a similar way of showing which it is, though I only just noticed this, as the bottle itself has a matte finish rather than the shiny finish on the others.

The brush on these is nice, it’s not huge but it does manage to do my nails in two swipes most of the time as it spreads well. The length of the brush and the handle probably helps, they’re very easy to control and I think the formula for these helps too. The colours are pretty thick and easy to see where you’ve done though the top coats are quite a bit thinner and it can be a bit of a problem as when the top coat touches your cuticles or the edges it can mean it comes off easier as it grows away as it can catch on things. I think that’s what I did wrong with my nails as a lot of them have the bottom end sticking out and catching on things.

As these both lasted pretty much the length you’d expect them to with either the normal top coat or the matte then I’d definitely recommend these. You do need a UV or LED light for gel manicures and I’ve only tried these with the RCM travel one rather than the pro version so it’s a bit of a longer process but it’s still worth it to me. I normally find that other nail varnishes last a few days (or less with some brands) but this has lasted really well so the gel kit that you get which is the main price difference between this and some nail varnish brands. I have got a couple of these bottles from last Christmas in other colours and they’re still more than half full so they do last well, they’ve been used multiple times for me, my mum and my sister.