Happy Halloween! I haven’t really done much today Halloweenish apart from watching an old Hammer Horror movie and apple bobbing. We had some trick or treaters and I may have eaten some of the sweets that they didn’t take. Have you guys had Halloween plans and done anything fun tonight? Or are you going to if you’re in America and it’s still the afternoon. 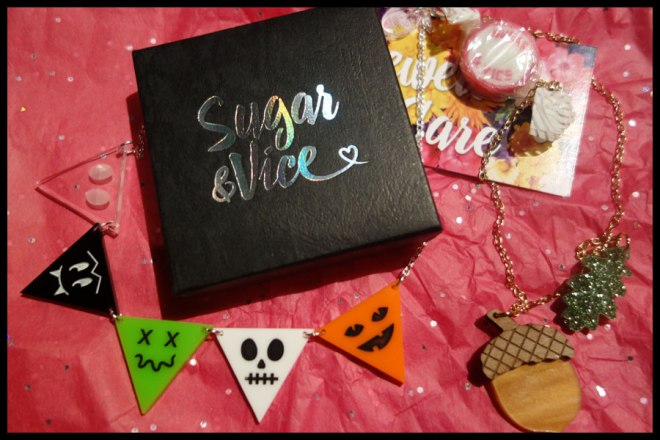 This is only a fairly short post but I wanted to review these while the one necklace is still on the site. I’m not sure how much longer the Halloween range will be up but it’s still there now. I’ve bought some necklaces from Sugar and Vice in the past and really like the style and the quality is really good. They’re laser cut acrylic shapes which are then used in different types of jewellery, I’ve just tended to stick with necklaces as I prefer smaller earrings and I just wear a greater range of necklaces though I do love some of the bracelets so I might get one of them next.

The envelope is pretty in itself, it’s a bright orange metallic one with a bright coloured sticker. I’m not sure if they’re always the same stickers but I liked this one (I used it the other day for the previous post) and I tried to keep it in one piece but didn’t succeed. 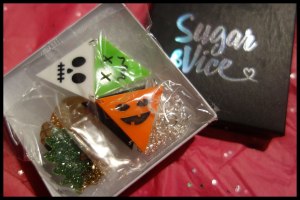 Inside you get the invoice, a piece of rock with Sugar and Vice down the middle of it which I thought was a nice touch and a piece of card about how to look after the jewellery as well as the jewellery itself. The necklaces were both in the one box, it’s a pretty sturdy feeling box and looks nice with the holographic print on the front so I’ll probably be keeping them both in here. There’s the normal fluffy padding and they came in separate resealable clear plastic pouches.

The first one that caught my eye was in the Halloween range, the Halloween Bunting Necklace is £15 and is in the bunting style that seems to be around with the acrylic triangles attached to a chain so it hangs and looks like the bunting that’s hung around a lot at festivals. I’ve wanted one of them for a while and seeing this one with a Halloween theme I had to have it. There are five triangles in different bright colours with basic shapes showing the faces of the different horror based characters.

From left to right they’re; clear ghost, black vampire, bright green zombie, white skeleton and orange jack o’ lantern. This necklace comes in a choice of two colour chains, gold or silver, and has three chain lengths to choose from as well. I chose the shortest as that’s the length I prefer for necklaces but I think this is one that would look good at any length as it’s meant to be hanging loose for the bunting look. I love the combination of colours and the ghost with the clear back works really well. The paint is pretty crisp and hasn’t smudged which can happen with paint on acrylic jewellery. I’ve worn this today and I love how it hangs, it’s a nice length that’s above where a lot of vest tops sit so it remains a statement, it would work on higher necked tops and I’d probably wear it on a plain t-shirt but think it would get lost on a pattern, that’s just me though.

The Acorn Necklace also costs £15 and comes with either a gold or silver chain. I decided on gold for this as I felt it’d go best with the autumn look and I don’t have much gold jewellery anyway so it’s something a bit different. This is only available in the one length and I think it’s good as it sits fairly high, though it’s longer than the bunting one I chose. This has an acorn at the bottom of the chain which has two layers, the one is the main nut and it’s a pearly marbled pale brown, basically the colour of a ripe acorn, and the layer on top is wood which has been carved with a pattern for the part that holds the acorn. 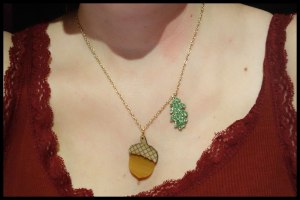 Part way up the chain is a glitter green leaf and I love the way that these hang at different lengths and it makes it a bit different to a necklace with something at the bottom of it.

Both of the necklaces are pretty light, the bunting one especially weighs less than I expected, but they feel well made and I know from past necklaces that these will last well. I like the small acrylic charm that they put on the back, by the clasp, with the Sugar and Vice logo on it as it’s fairly small and unobtrusive as it’s a clear plastic with a frosted plastic wording but it’s still in the same style as the rest of the necklace.

I am very happy with these, I am definitely going to be wearing both of them a lot, even though Halloween is today so it’ll be out of season really, I just love the design on the bunting one with the faces as well as the style of the necklace as well. I am already planning a possible future order, I’m just hoping that the axolotl necklace is around for a while. I like how they’re cheaper than some of the other companies that do a similar style, I love Tatty Devine but they’re a bit beyond what I’d want to pay for the style of jewellery, and in the styles that I have bought the quality is as good from Sugar and Vice. If you like the acrylic jewellery style I’d definitely recommend giving them a look, especially if you’re in the UK as they’re based here so the postage isn’t high.