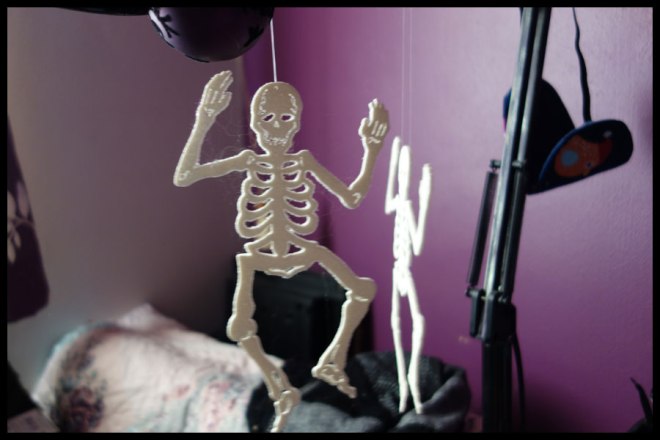 I love autumn, the colours and the weather but I think my favourite thing is probably Halloween. When I was little it wasn’t really a bit thing in the UK and not many people went trick or treating where I live, though we did have small parties with friends with apple bobbing and things like that instead. It seems like it’s got a lot more popular the past few years with decorations and I see lots on Facebook about people having parties and my YouTube subscription page gets full of makeup tutorials. I always want to try them but I have nowhere to go with them, maybe this year I’ll try to do one anyway and see how it turns out.

With all the events and parties around it’s a bit frustrating not being able to do anything because it just takes more energy than I have at the moment. I’ve found instead that there are lots of other ways to enjoy Halloween, though to be honest a lot of them I like doing all year round anyway and The Nightmare Before Christmas and the Corpse Bride get watched the rest of the year too. I thought I’d do a post about what I do for Halloween, maybe we can share ideas and you guys will have something else you do that I can try, especially anything different from other cultures that doesn’t take much energy as I like finding new things to do or make.

Halloween Nails are probably one of my favourite things around Halloween, I love doing simple designs like spiders webs or more complicated ones. I’ve tried to find some photos I did of ones from the past few years as the ones I did inspired by one of the Yankee Candle jars are probably my favourites. The spider webs are fairly easy, do a base in whatever colour you like, then I draw the web in black with a slightly thick brush or pen and silver on top with a thinner one. My hands shake quite a bit sometimes but even when the lines are wobbly I still like the effect. Drawing Halloween character faces on the nails is also fun or painting them black and adding either red drips on the tips to look like blood or white for fangs.

There are so many things you can do with normal nail varnishes and toothpicks, I still don’t have any proper nail tools, or nail art pens.

Scary Movies are probably an obvious one but I still love a lot of the old classics. I recently bought a 21 disc set of Hammer movies, a lot of them are horrors, and I can’t wait to watch them around the end of the month. There’s also a lot of TV shows that do Halloween specials, I normally end up watching the CSI:NY and NCIS ones and some of the Poirot or other murder mysteries around that time of year. I love how I can watch these on a not so good day as I’ve seen them so many times I just curl up under a duvet or in my onesie with a warm drink and watch them as I have them on DVD. 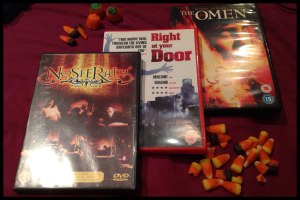 There are so many on around now, especially if you have Sky, I check it regularly to see what’s on and use the search so I find them even if they’re on really early in the morning.

Decorations are something that I think are fairly new in the UK, I’ve only seen them in big stores and supermarkets the past four or five years. A bit like Christmas I love decorating my room with Halloween things, though my skeletons on the lamp are up all year round as I just like them there. I have some Halloween style tinsel with skulls and things that hang on the wall. I think everything I got is either from a local garden centre or from TK Maxx. 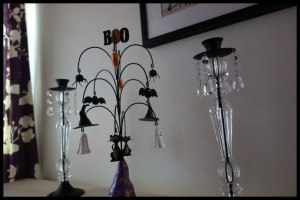 There isn’t as much around as with Christmas but it’s still a nice way to bring Halloween in even on days when I’m not up to much else.

I love Halloween Jewellery and I’m going to buy a necklace from Sugar and Vice, they have a nice range of different Halloween ones. A lot of companies have started selling Halloween themed jewellery around this time of year, though there’s quite a few that sell them all year round with things like skeletons and bats. I like having jewellery for the season, I have some Christmas earrings I wear a lot in the winter and my Jack Skellington earrings get worn a lot from now on as they fit with both.

Spooky stories are always good, well I say spooky I guess the ones I’m planning on reading are more classics than full on spooky with Dracula

and Frankenstien being the ones I have lined up for the next couple of weeks. I used to love Goosebumps books, it took me a while to get into them as I really didn’t like scary things when I was little (everyone else like Buffy but it took me years not to be scared of it!) but when I did start reading them I read a lot of them. I know they’re meant for kids but I still think I might read some again, see what I think of them now.

Horror Games aren’t exclusively Halloween but I do tend to play them more around this time of year. Last year I started Amnesia, Alien: Isolation and a couple of others though I don’t think I managed to finish them properly so I’ll probably be playing them again. At the moment I’m playing a Dracula point and click game like the Sherlock Holmes ones from Frogware, so far they’re good but I’m not that far into the Origins one, will have to see how it goes. These do take quite a bit more concentration than any of the others on the list, maybe less than books depending on how they affect you. I think that’s the main reason that I didn’t complete them before, I’ll just have to make sure I pace it a bit better.

I think I’m going to have a go at Halloween makeup this year and there’s always all the sweets that you get for trick or treaters. Half the time we don’t get them but you just know that the one year we don’t buy anything is the one year that they appear. I’ve had to reduce my sugar recently so I won’t be eating the sweets but I might treat myself to a toffee apple, we don’t have them the rest of the year and it’s just one night so if I see a good one somewhere I’ll get one. There are lots of products that companies come out with like the Lush and Fortune Cookie Soap ones I’ve done reviews on. I’m pretty sure that there are other things I should put in here but I’ve run out of ideas. I might add some more if I think of them, do an extra post next week if I think of enough.

How do you guys celebrate Halloween? I always like finding out how other people and other countries do things like this. I don’t know much apart from what I see on movies and TV about American Halloween, which seems to be the way it’s becoming in the UK.