This is a mini recent purchases because I think these four things are all ones I’m really excited to try so wanted to do a sort of first impressions before I do a proper review after playing around a bit with them. I made a couple of orders, one from Boots and one from John Lewis for presents and things and got these too, one is kind of a treat for finishing my course as I have been wanting any of the Naked palettes for ages and it seemed like a good reason to get one.

Boots had a three for two offer on Soap and Glory and I wanted to get some Sexy Mother Pucker lip gloss as a present and have had my eye on their lip lacquer since I’ve seen them. I got the lip gloss pencil for free as it’s the cheapest, I think they may have reformulated them, or at least the packaging is very different form my previous one of theirs, so it’s going to be interesting seeing how they compare.

The Sexy Mother Pucker lip shine lacquer from Soap and Glory has intrigued me since I first saw it. I love the Sexy Mother Pucker glosses though I don’t get the tingly feeling much and they don’t really plump my lips the finish is nice and they always moisturise my lips better than most other lip glosses I’ve tried. This lip lacquer version is actually cheaper than the original, costing £7. The lip lacquer versions have a lot more pigment, as you’d guess, and this one is in the colour muse bouche which is a slightly blue tinted red with a hint of shimmer. It’s a nice colour and from swatching it on my hand it seems pretty pigmented, can’t wait to give it a proper go and see how it lasts with eating and drinking. I also found this Christmas set, I think for this year, when I searched for the lip lacquer to add a link and it has the lip lacquer, a mascara, eyeliner and some eyeshadows and face powder for £20 which might tempt me if it’s on offer. There’s also a £15 set for festivals with another colour of this lacquer in it with face wipes, mascara and a few other festival essentials.

The second Soap and Glory product I got was the Sexy Mother Pucker Gloss Stick which I think is a reformulation or repackaging of the sexy mother pucker lip gloss pencils they did. 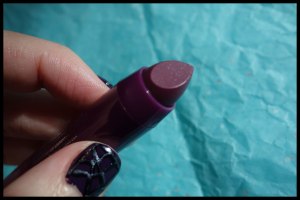 This is in the shade purple rain and is a nice purple tint with a hint of shimmer in it, enough to make it look wet rather than full on sparkle. The formula seems nice and, like the lip lacquer, I can’t wait to give it a proper go with some drinks and eating, though the fact it’s a tint and quite sheer would probably make it less noticeable if it faded anyway.

From John Lewis I got two Urban Decay products. I got a mini Primer Potion with one of the palettes I bought in the past and loved it, it’s lasted pretty well but I did have to start using my too faced shadow insurance which I am less impressed with so I had to get a replacement when I saw them there. After having bought a fake Naked 2 on eBay (I got a refund and returned it) I decided to stick with a company that’s definitely reputable for any future Naked palette purchases.

The Anti-Aging Eyeshadow Primer Potion wasn’t what I planned to get as I was looking for the original, though as they didn’t have that in stock in either the mini or full size I thought I’d give this a go and see how well it does compared to that. I think they’ve redone the packaging recently and there’s a nice effect on the handle of the wand. I’ve only had the mini ones before which was also in this tube but I definitely prefer the tubes to the more solid old versions as when it gets really low you can use it as a tube instead of the wand if you need to. This is definitely going to last me a long time with this much product, I’m going to compare this to the last little bit I have left in the normal mini version I have as I was keeping it for occasions when I needed my eye makeup to last better but now I don’t have to. This full size version costs £18 which, for the amount of product in there and how long it’ll last me, seems like a more reasonable price than I was expecting. For some reason I was expecting Urban Decay primers to be closer to £30.

The final product is the thing I am most excited about, the Naked 3 Palette has been around a while and I know I’m behind on getting any of the Naked palettes. This is the one that I thought looked the most unusual of the three, I love rose golds at the moment and these colours looked so pretty and different from the other nude palettes I have. I am definitely going to review this, I can’t wait to play with it and see how this Urban Decay palette compares to my older ones. I did avoid Urban Decay for a while with the whole selling in China and animal testing problem but as they decided not to I have been looking at them more. Everything else I have from them has been second hand (I may have gone a bit mad on eBay at one time and bought four palettes in one go) and are old, I think the latest was the Book of Shadows with the butterflies. I think they have reformulated the shadows since then so will have to see when I’ve taken photos and I can try them all out. I love the colours in it, the warm rose gold based colours and the fact that it actually contains some mattes, which I haven’t tried from Urban Decay before, and none of those chunky glitter ones that drive me mad sometimes with fallout. I think I’ll stop posting about this in here, so far I’m impressed and it’s lived up to expectations despite the larger price tag than I normally spend on palettes at £38.