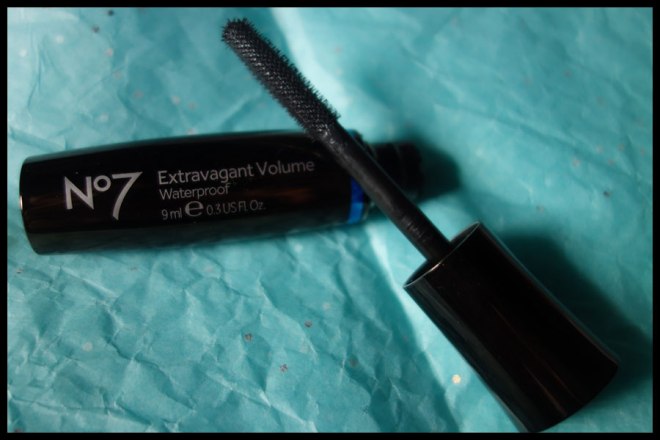 I think the next few weeks Monday posts might be mascara, I’ve got five or six I want to review and this way we don’t have a week of just mascara and it breaks up the palettes. I’ve had some of these sitting there for months and never touched them so I just want to see if they’re any good. So today it’s the turn of my current favourite that’s been going for months now and running out, the No7 Extravagant Volume in Waterproof black.

This is only available in Boots and costs £12.00 so it’s one of the more expensive ones in my collection, however I have found this set that has this and two others (the red one is in my collection to review) so if that’s available in the future it might be a good way to buy this as it’s £18.00 for the three. It claims to help increase volume and length, something which it seems all mascaras are claiming at the moment. I think my expectations for mascara might be a bit high as I find that a lot don’t do what I expect them to so I’ve just given up on these ‘lengthening’ or ‘volumising’ claims as they never seem to come true.

For years I didn’t have a waterproof mascara and got this for Christmas last year, I started it in February and it’s still going strong though I have been sharing it with another. I know that they say only use mascara for 3 or 6 months (I can’t remember which, I think 6) but I don’t want to throw it out even though it’s still working well so this might be a kind of a farewell before I go onto my MUA one for my waterproof. 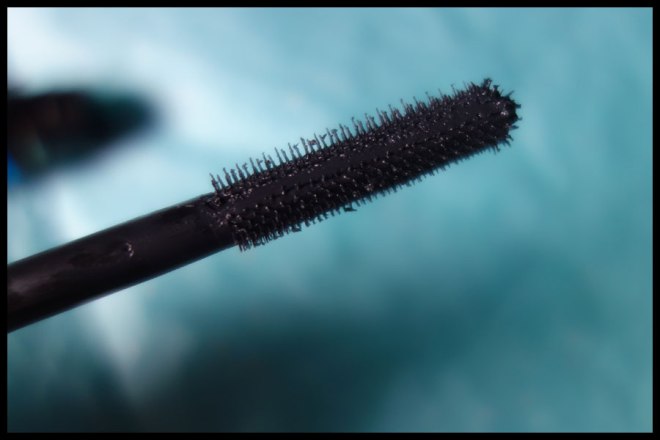 The shape of this mascara is a bit different, it’s a lot shorter and thicker than the others in my collection and it’s a nice shiny dark brown, though the reflectiveness does make it hard to photograph. The non-waterproof is a more matte effect so it’s easy to tell them apart. The shape of the container does make it easy to hold and the handle is a nice shape to control it easily. The wand itself is also thicker with the end being made of different length plastic bristles. I do like these plastic bristles over the fibre ones you get in a lot of mascaras. The longer ones work well to keep the lashes well defined and make it easy to brush out any thicker blobs of mascara, though I haven’t really found clumping an issue for this one, and also make it really easy to use on the bottom lashes without getting it everywhere, a problem that I seem to have with some.

For all the time I’ve been using this I’ve only done one layer, I like the effect of just one layer as it does give the lashes some colour and adds a bit of length and definition, though I didn’t notice how much until I took these photos. It’s very quick to apply though it does take a few minutes to dry completely, longer than some others I’ve tried but once it’s on there it’s sticking. It does take a few wipes to remove it at the end of the day but it’s lasted me a whole day, maybe 8 hours, without melting though sometimes on the lower lashes it does start to move at around the 5 or 6 hour mark.

I thought I’d give it a proper try and do some more coats, though I stopped at two as this made me feel a bit like I had false lashes on and more than the two coats seemed like it might be a bit much. This did impress me, the difference between one and two layers when it comes to the length was more than I expected. I can’t say I saw that much difference with volume but the length made up for it and I’m not that bothered about volume anyway. At two layers I could feel it on my lashes, which felt a bit odd, so I wouldn’t do this for everyday but I’d definitely give it a go for an evening when I might feel like having false lashes but can’t use them because I fail at them. I did wait for the first coat to dry completely before adding the second but the photo showing both my eyes, one with two layers and one without, shows the difference.

As far as waterproof goes this one stayed there when I splashed it with cold water and wiped my face. I did find that warm water it was fine but when it got to actually steamy water it got a bit sticky. It didn’t budge really but with the two layers I did feel my eyelashes sticking a bit when I blinked.

I would definitely recommend this if you want to try a waterproof one that really lengthens. I already liked this and it’s probably my go to mascara but I was surprised by the difference in length and it impressed me as I wasn’t really expecting that much as a lot of lengthening ones don’t actually do that much until you really layer it on, maybe I’ve been trying the wrong ones. As far as I’m aware No7 do not test on animals, I’ve always been told that ad their official statement says they don’t so I’m happy enough to believe them as others who buy cruelty free have agreed with it.

I think you can tell from this review that I love this mascara, I will definitely be repurchasing even with the higher price tag than others I’ve got to try. Now I’ve found waterproof mascaras I think I’ll probably be sticking with them unless I find an amazing non-waterproof one. Especially as I have two that are cruelty free.