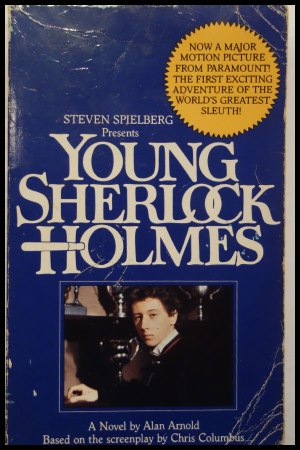 I have had this book for years, I think I got it in my first Sherlock Holmes phase which was probably fifteen years ago, for 30p in a car boot sale. I know I read it back then but I really couldn’t remember what it was about and as I’m currently watching and playing a lot of Sherlock Holmes I felt like reading one and a bit different than the original Holmes books as I’ve read most of them multiple times I thought I’d read it again. 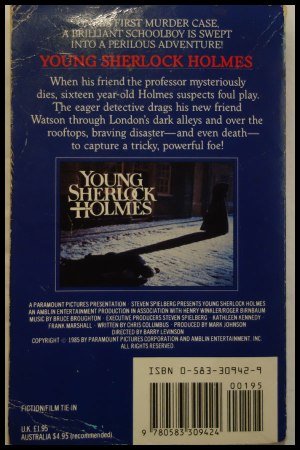 On the front it says it’s a movie tie in version but also that it’s based on the screenplay of the movie so basically it’s just the book version of the Steven Spielberg movie. I have never seen the movie, I’ve seen it on Sky a few times and meant to watch it but not got round to it, so I have no idea how close this is to it. Maybe I’ll watch it and do a comparison, have any of you seen it? If so is it any good?

Onto the book, it’s a fairly simple cover with a photo from the movie like most movie tie in versions have. It took me longer than it should have to realise the reason the H and O in Holmes look a bit weird is they’re a magnifying glass which is a nice touch that goes with themes normally used with Holmes things. The back has another still from the movie, which looks like it was a promotional image for it given how dramatic it is, and information on the movie itself which is unusual on a book even if it’s a movie cover (at least ones I’ve seen or own).

The story is a detective story, not surprisingly, with the amount of deductions and comments from Holmes. I think the character of Holmes in this fits well with my imagined version from other books, he has the physical energy I think of, I’d say similar to the way Jeremy Brett played him in the Granada series, where he suddenly jumps up to do something, or runs over rooftops in this case. The character of Watson seems a good fit to me too, the tone of the writing from his point of view when it’s obviously his memories at the beginning is close to the original books. There was mention of his weight and small details that I don’t remember in the original books but could be considered references to the way people had played him at various times.

The story itself is definitely the kind that Holmes could have been involved in, it’s set in the boarding school where he and Watson meet, according to this book, and there are two characters in the school that, if this is considered canon, would be the influences behind certain phrases and behaviours. There are multiple deaths and Lestrade is involved in investigating them, or not, which is a nice tie in with the original books. Without giving too much away and posting any spoilers there are sort of supernatural elements to it and there was a twist near the end that I didn’t see coming when it comes to one of the characters.

There is, of course, a different introduction between Holmes and Watson, though it’s very like the one in the first Sherlock Holmes book, A Study in Scarlet. There’s the stereotypical Holmes deduction, getting a detail wrong and Watson being amazed by it, though slightly insulted in this one. They seem to immediately become friends, much like in the originals, as Watson sort of gets dragged along and just lets it happen.

I did find some of the descriptions rather rambly and it took a long time to get into the actual story which made it seem like the author was really trying hard to write about every detail shown in the movie’s opening scene rather than how someone would write it if it was a book first. There were other times where scenes were described that neither Holmes nor Watson were involved in. I know in other Holmes books this does happen sometimes, though it’s normally through the eyes of the client asking for their help. That probably seems a bit nit-picky as it’s not written to be one of the original stories but it just sort of stood out as different to me.

Overall I’d say this is a nice enough book, it’s pretty short at 205 pages but does take a while to get into the introduction between Holmes and Watson because it’s setting the scene for the first death. It did seem to drag on a bit at time when it comes to description but the majority of it was fairly fast paced and the characters fitted well with the originals. There were references to comments and events in the original stories which was a nice touch as this is written as Watson looking back to tell people about their first case in the same way that the other books are Watson telling the reader about them after the fact.

If you like Sherlock Holmes or light detective novels I’d say this was worth looking at if you can find it, I’m not sure how often it’s in libraries now as it’s thirty years on and not the best known book, I did have a look on Amazon and couldn’t find the book, the movie is on there though, second hand bookshops and eBay are probably your best bet for this book if you want to buy it. I can’t remember any very graphical descriptions of the murders and I read it when I was around ten or eleven originally so I’d say it’s probably one that’s suitable for teens. I’d recommend this book only after you’re read the originals if you want to read it because of the Sherlock Holmes aspect rather than just as a detective book, it’s not one I’d say is a great introduction to the world of Sherlock Holmes but it does give an interesting possible backstory despite the different meeting between the main characters which is a fairly big part of A Study in Scarlet.