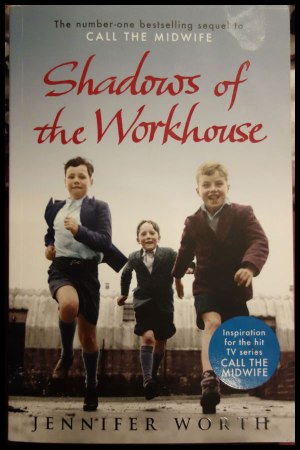 Title: Shadows of the Workhouse

I love the show Call the Midwife and as soon as I found out it was based on books I thought they’d be worth looking at. In the end I found the first two in a sale on The Works website and so I jumped on them. They’ve been sitting in my bookshelves for a while now but after reading the first one last week I wanted to carry straight onto the second one this week. It wasn’t the original plan but I enjoyed the first so much and had the second it seemed to make sense. 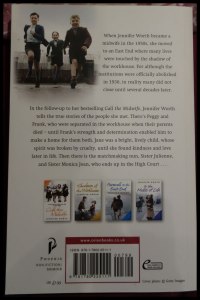 This copy of the book was published a year after the previous one I reviewed though this doesn’t have the cast on the front. It has photos of the versions I have seen around more on the back, I think they tie into each other better. I haven’t seen either of the later two books from the series in the same style as this or the first though it may be that they’re just less common in book stores. I do like the look of this with the colour photo that has a filter on it to make the colours more muted.