In my recent purchases I said I bought this When Froggy Met Piggy set of two OPI nail varnishes in TK Maxx. I’ve recently been loving my rose gold jewellery and the glitter in this has a very rose gold look which caught my eye. I did buy the mini five set that they released when the Muppets Most Wanted collection was released though it didn’t have Gaining Mole-mentum in. I am a big fan of the Muppets so this was one of the OPI collections that I really wanted to like though there weren’t really any in that set that impressed me but glitters tend to be a safe bet as opacity isn’t a problem as it’s just bits of glitter in a clear base.

The two nail varnishes in this set are called Kermit Me to Speak and Gaining Mole-mentum. I do love the names of the OPI varnishes, I like how they’re normally puns and still within the theme though they don’t always have anything to do with the colour of varnish. This set was £9.99 in TK Maxx, though I can’t find it on their website there are quite a few other duos when you search OPI. There was at least one other Muppets one in the store and a few of the other pairs, mainly the ones with the tints or gems in them and a few of the pale shades pairs too. 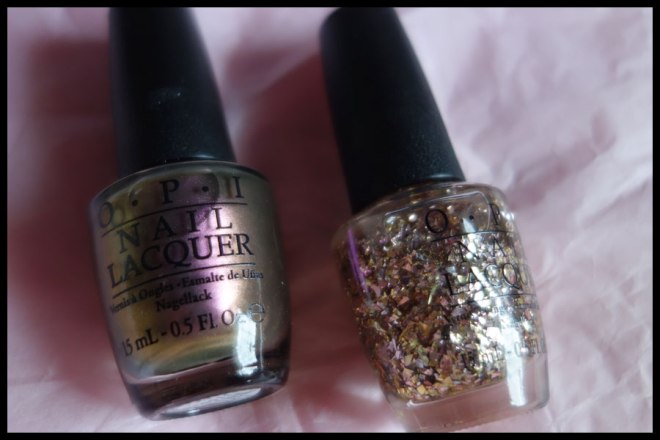 I really like OPI bottles, I’m not sure what it is but the shape is just one of those that I really like. The brushes are pretty standard nail varnish brushes 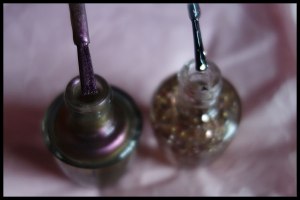 though they’re on the thin side and take more than just two strokes on my nails. In the Gaining Mole-mentum bottle there is a lot of glitter for the amount of nail varnish which makes you think it should come out easily and most of the time it’s fine and you don’t have that problem of having to dig around in the bottle with the brush to get enough of the particles on but there are times, like in the photo, where the glitter just does not want to stick and it’s mainly the clear base.

Gaining Mole-mentum – Rose gold uneven glitter particles in different angular shapes. A mix of gold and pale pink glitter gives the rose gold effect but the colour difference is pretty subtle. I really like the shapes of this glitter and it’s a good size but doesn’t stick out of the top coat and get caught on things like a lot of larger glitter varnishes do. I didn’t leave this on long enough to see how well it lasts but there was no obvious peeling after a couple of days. It’s very hard to remove but then I expect that with the glitters that actually last and I tend to find OPI some of the best for lasting and worst for removal with glitters.

I used this as a statement nail on top of the OPI a Grape Affair from the Coca Cola collection they released over Christmas. I like the combination of the dark purple and the rose gold and think I’ll be trying this in the middle of a gel manicure with my darker red and see how well it works in that.

Kermit Me to Speak – Duochrome olive green or khaki with pink and some hints of a gold colour in some angles. From straight on this is definitely more of a pinky purple colour with a hint of the green so it gives it a look almost like oil to me. From a very wide angle, like looking along my hand, it appears more gold with the olive green hint and it’s only when shadows are reflected in it that you see the olive green properly. I really like this combination of colours and wanted to love this when I got it in the mini set a while ago but unfortunately that bottle seemed to take four or five layers to become opaque which was more than I was prepared to do. This bottle thankfully only needed three coats to be completely opaque. The first layer is very sheer and even the second I was doubtful that it would work but the third finished it completely to the point it is in the photo. I love this colour, I think it’s one that will work well in the autumn and winter as well as a spring or summer look as the green adds a more earthy hint which seems to be the colours people go for especially in autumn collections.

I can’t remember when these came out, it must have been when the movie was still just in cinemas as it says that on the front of the box so it’s been quite a while and I think that’s why they’re in TK Maxx at the moment. I’d say for me this set was worth it just for the rose gold glitter but Kermit Mme to Speak definitely impressed me compared to what I was expecting and I’m glad I gave it a second chance. It does make me wonder about some of the mini bottles though as it needed more coats then, I’m going to see if I still have that and compare the two maybe.

I haven’t really seen any glitters around like Gaining Mole-mentum in the rose gold colour, I may have just missed them though, so if you love the look of it like I do then I think this is a good set, or just this nail varnish, to try. I have seen quite a few duochromes with a similar colour combination to Kermit Me to Speak and as it’s a collection which I think has stopped production then it may be easier to go for one of them if you don’t want the glitter.

If they have this in a TK Maxx near you I recommend this set if you don’t have anything like these colours. If you do then it might be worth a look anyway as the one near me only has OPI in very rarely and others have said there are quite a few OPI sets in different TK MAxxes at the moment (what is the plural of a TK Maxx? It’s weird to type and that looks wrong). The nail varnish section in general was pretty well stocked so I’m going to be keeping an eye on there more in the future as well, especially if the glitters work well in a gel manicure.