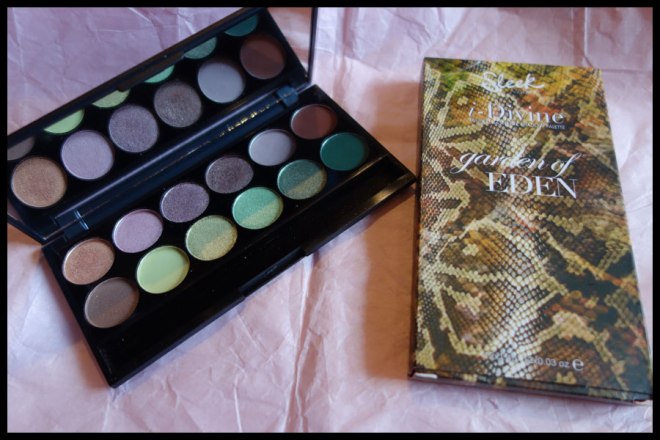 I’ve had a recent go through of all my makeup and looking at my palettes I’ve decided to do some reviews on the ones that are still around. I love Sleek makeup and their i-Divine palettes especially are a bit of a weakness of mine, I have five at the moment, and think that they’re great value for money when they’re the well pigmented colours. Unfortunately they seem to be a bit hit and miss with certain colours and I’ve found the best and worst through using them.

This is the Garden of Eden palette, it’s £7.99 at Boots.com here and is available in other stores too, Superdrug has it at £7.99 as well here as well as Sleek’s own website. In most of the reviews I’ve found online the outer box is rather different than mine though I’ve only ever seen this version in stores near me, I’m not sure why that is. Maybe it’s online vs in store differences or these are all older packaging and it’s just not selling well near me.

In this palette there are three I would call matte, seven shimmery/metallic shadows and two with a matte base and larger glitter particles. The top layer is mainly browns and purpley colours but fairly neutral and the bottom row is mainly green, there’s quite a range of each.

I always keep the card outer packaging for the sleek palettes, especially when they’re more different like this one. I normally like when a series of products has a similar look but I really like this one being different from the more plain black outer packaging used on a lot of the other palettes. The snake skin effect works well with the Garden of Eden theme and I like 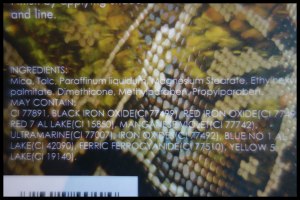 reptiles so it’s a good look to me. It does make it harder to read the ingredients, I’ve taken a photograph anyway so you can see it by clicking on the photo to make it bigger.

Inside the card the plastic palette is the same as with the plainer outer packaging. It’s the same look as most of their others, it has the matte black plastic base with a more shiny Sleek makeup logo on the front. The back has the name of the palette and is pretty simple with some information on the company like the address. I like the look of these and think they’re great in theory with the matte black but the second you touch it they mark so easily and it’s hard to wipe them off.

Opening the palette it has the normal mirror that takes up the whole top, the hinge holds it up well and it stays in place at whatever angle you choose. This should come with a clear plastic sheet with the names on, unfortunately mine didn’t so the eyeshadow does make more of a mess on the mirror and leave circles on it, if you have the plastic sheet I’d say keep it even if you’re not bothered by the names.

Onto the eyeshadows themselves and I feel like I could almost be reviewing two totally different products, the mattes have a completely different feel to the shimmer/metallic and more glittery ones. As I already said I don’t have the clear plastic sheet with the names so I’m going by the names I’ve found online. In the photos the top half of the swatch has Urban Decay primer potion under and the bottom half is just on my skin, for some of them this makes a big difference.

Gates of Eden – bright orangey copper shimmer, very well pigmented and creamy. It looks like it could be metallic rather than shimmery from some angles. It glides on well and doesn’t need much at all for very good coverage. Looks good with or without primer but creases after a few hours without.

Eve’s Kiss – pale pink or lavender shimmer, another that could metallic from some angles. Smooth, creamy and blends very well. It’s a fairly pale colour but goes on opaque with one layer. Works well with or without primer but creases after a few hours without it.

Paradise on Earth – Slightly darker than Eve’s Kiss but still a shimmery muted purple, I think it may have a bit of a bronze duochrome as it appears that colour in some light. Smooth, blends well and very creamy. Does crease after a while without primer but pigmentation wise primer doesn’t make much difference.

Forbidden – matte muted lavender base with silver and possibly multi-coloured/holographic small glitter particles as they seem to change in the light. This base is disappointing as a main colour as it isn’t very pigmented, the primer does make a bit of difference but not a lot. It does work well with the rest of the top row as a crease shade, though the sparkles can cause a bit of fallout. Quite dry and powdery but blends fairly well with the creamier shadows.

Flora – matte mid warm brown. Dry and powdery with poor pigmentation which goes on a bit patchy and doesn’t blend well. The primer does make a difference and it builds up to be fairly opaque but not very impressive.

Entwined – slightly yellower version of python, matte light brown muted base with gold glitter in it. On the skin this looks very like python, it’s hard to tell the two apart next to each other apart from the glitter. Dry and hard to blend out but blends well with the other eyeshadows somehow.

Adam’s Apple – Bright matte green. Of all the colours this is the most disappointing for me, it disappears on the skin and even with primer I had to do a few layers to get any colour at all. It’s dry and powdery and doesn’t blend well. This was the shade that stood out the most to me so even more disappointing that it’s a failure for me.

Fig – shimmer lime green with gold duochrome. A really nice colour but the green doesn’t show that well, it’s a great yellowy green shimmer when it catches the light but straight on it’s a bit underwhelming. Good pigmentation and coverage even if you can’t really tell from some angles and very creamy.

Evergreen – bright mid green shimmer, almost metallic and a slightly bluer green in some lights. I think this is my favourite of the greens, great coverage with one layer and lasts very well even without a primer. Nice and creamy, blends well and very well pigmented.

Fauna – shimmery dark green with a gold duochrome to it I think. Great pigmentation, catches the light really well and more olive with a gold tone to it from some angles. Opaque with one layer, creamy and blends very well.

Tree of Life – matte dark green. Dry and powdery in the palette but no fallout when using and has pretty good pigmentation even with one layer. Can be a bit patchy without a primer and needs it to last any length of time. Blends pretty well but you have to be careful with it, it does work quite well as a liner though.

Just one thing I noticed when swatching; Forbidden, Flora and Entwined are very close in colour. It’s hard to tell the three apart without a primer with one or two layers, Flora is slightly warmer than the other two and browner but it’s not by much which is surprising with how different they look in the palette.

I think the majority of these colours are impressive; they have a good amount of pigmentation, blend well and last for as long as I’ve wanted them to. Unfortunately there are a couple, Adam’s Apple especially, which let it down. I’d say that a lot of the older palettes, and I think this is in that time frame, have a problem with mattes when it comes to Sleek eyeshadows. I haven’t tried any of their pure matte palettes because of this.

If you want some nice green shimmery colours then this is a great palette, it has a range of greens and four out of the five had good pigmentation though the Tree of Life colour doesn’t last as well as the shimmers. It is unusual, at least in my experience, to find a nice matte dark green so that’s definitely a stand out for this palette. If you’re less interested in this palette or were mainly drawn to it because of Adam’s Apple (the bright green stood out the most to me too) then I’d go for another neutral palette if the top row is what you’re more interested in.

I’m glad I have this palette, for a few weeks Gates of Eden, Python and Paradise on Earth were go to colours for me along with Forbidden and Entwined in my crease and I still dip into it now and then. I will say that there are probably other neutral palettes out there that could have given me those colours and I don’t really use the greens but I like having them anyway and having the option to use them as they have impressed me again today. Basically if you think you’re getting dragged in by the bright greens even if you don’t think you’ll use them, like I was, then probably go for one of their other palettes if you want something from Sleek.