I posted about these in my recent Tesco purchases post but I wanted to do a proper review as soon as possible as the one, Warm Apple Pie Hugs, is a limited edition and I have no idea how long their limited editions last. I love apple and lemon scents and as these were on offer I decided to buy them as I did like the two previous Treaclemoon shower gels I had. All the Treaclemoon products I’ve tried are not tested on animals, as far as I know that’s across the brand.

These are available on the Tesco website as well as in stores, Those Lemonade Days can be found here and Warm Apple Pie Hugs is here. The 500ml bottles of shower gel are normally £2.99 but are £1.99 in the offer, even at full price they’re a lot less expensive than other shower gels I use and I think you get more than you pay for from them. You could try looking on the Treaclemoon website, here, but I think the limited edition one they have on there is from a couple of years ago and is actually permanent now so I don’t think they’re updating it much.

Aside from the actual shower gel I really like the look of their products; the style of text that looks like typewriter font and the contrasting colour that highlights words on the back. Unfortunately the orange they’ve used doesn’t stand out that well on the back of the Warm Apple Pie Hugs. I like the little description, like a mini story, they put on the front of the bottles and the apple design on the Warm Apple Pie Hugs is nice, I’d like it if they added that extra to the permanent range too and I 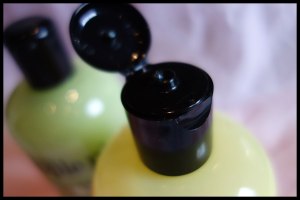 think they are as there was a little cartoon on the Cinnamon Nights bottle. The bright colour of the bottle comes from the product itself, the bottles are clear with a black top. The plastic is easy to squeeze and the product comes out well, it also survives being dropped on the shower floor by mistake which is always a good thing for something you want to use in there. I didn’t mean to find it out but it’s useful to know as at least one other brand has not survived that with their 500ml bottles.

Those Lemonade Days is such a nice scent, it’s like lemon boiled sweets to me in the bottle and nice and refreshing. In the shower when I used it the scent changed a bit and smelled exactly like lemon sherbets, it has a tanginess that isn’t there in the bottle and seems a richer lemon scent. I’m not sure

why my camera did not want to photograph this the right colour in this shot, it’s more like the photo at the top colour wise, a creamy yellow. It’s a slightly more opaque gel and nice and creamy. It’s pretty thick and creamy and lathers well even without a shower puff or scrubby gloves but using them does make the product last longer. I didn’t find this too drying, I did use a moisturiser after I got out of the shower as my skin is very dry but it didn’t feel dryer after using the product which happens with some shower gels. I didn’t find that this scent lingered very long after I used it, maybe half an hour before I couldn’t smell it any more though that’s good if you want to use a perfume that would clash with it. 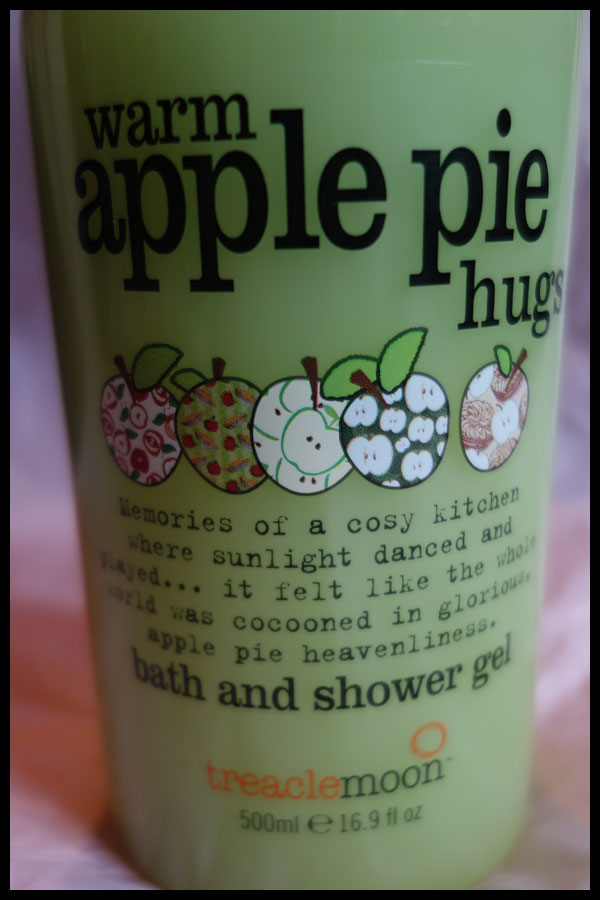 Warm Apple Pie Hugs was one I saw on the website and wanted to find to smell, it was the main reason I looked for them. I like apple scents but not a huge fan of anything bakery so wasn’t sure how this one would fare with that. I don’t think it’s a very pie scented product but it does smell of sweet apple and a fairly realistic apple scent as well especially for such a cheap product. To me it smells like stewed apple, which is the middle of an apple pie I suppose, so it’s quite a sweet scent but it does

have something almost buttery and creamy in there too, just not a very bakery scented part for the pie. When I used it in the shower it became more apple than the buttery scent which was good for me. Again, it had a pretty good lather and was easy to use as it wasn’t so runny that half of it goes down the plughole. It isn’t as creamy as the other and maybe slightly more drying but not in a way that made my skin feel tight or like I needed to put moisturiser on right away which is good for a gel on my skin. The scent didn’t linger long either, though I think maybe the ‘pie’ scent outlasted the apple when I smelled my arm.

I took this photo to compare the two shower gels and show how opaque they were, I’m not sure how well it achieved that and they aren’t the most attractive colours to combine in a shallow bowl really but I did find that the two combined smell really nice. It’s not two I’d have put together myself but it smells a bit like a creamy lemon ice lolly or some lemon meringue scented products I’ve smelled in the past.

Overall I do like these gels, they’re definitely worth the £2.99 and at full price the £3.99 for such a big bottle of product that works well and has a really nice scent that isn’t the overly fake smell you get in

a lot of cheaper products it’s definitely worth it to me. I think these are both fairly true to their scent, the lemon one more than the apple pie but it’s still definitely an apple scent. I’m not sure how long Warm Applie Pie Hugs is around so if you like the sound of it it’s worth seeing if your local Tesco has it next time you’re in there. I’m not sure if anywhere else stocks it, it’s the only store I can see on google besides amazon and ebay.

Now there’s a larger range in the Tesco near me I’ll be checking them more often when I use these up, before now it’s been the coconut and raspberry ones mainly or the hand products. If they still did the mango one I’d be trying to find that but I think it’s gone as I can’t find it on the tesco site at the moment. I might try the scrubs or other body products, have any of you got any recommendations for others in the product line to try besides the gels?