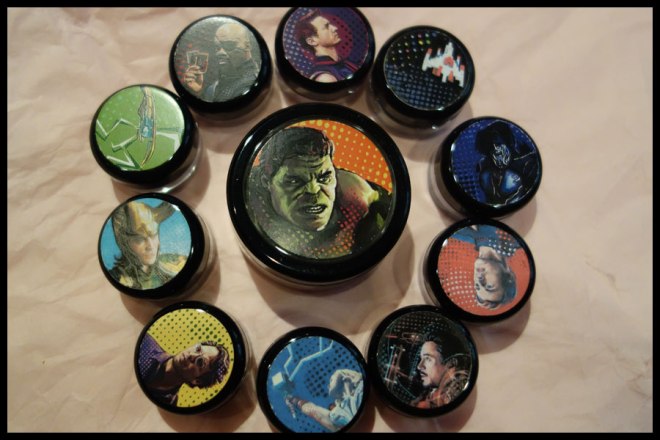 Shiro Cosmetics are an indie makeup brand from America who make loose pigments, lip products and some pressed powders if you’re lucky enough to get them when they’re in stock. I’m a big fan of the colours as all of the ones I’ve tried so far have consistently good pigment, last well and do not crease especially when used with a primer, which I always do. All of their own products are based around nerdy themes like movies, games and TV shows though there are quite a range of Nicolas Cage themed products (I kind of want the whole lip gloss range and the loose pigment).

Another thing I love about Shiro Cosmetics, besides the product itself, is the artwork on the containers. There are different artists for the different collections and if you buy the full size in them then some of the newer collections have individual art for each colour. Also in every order I’ve made so far I’ve had samples, recently these have mainly been from one of the other brands they sell on their store but often there are a few and they are a good range of colours and a good size sample as well which lasts quite a while.

They have some permanent collections but also come out with a colour of the month product which is limited edition, this month’s (April) is a lip gloss but they’re normally loose pigments. Their products are available on the online store here, the specific collection I’m reviewing today, the Earth’s Mightiest Heroes collection which is based on the Avengers, is available here as a set where you can choose whether to get the gloss and finishing powder. The individual products are available in the different sections, though here’s the range of loose pigments. If you want all of the colours then buying the set gets you a discount.

I’ve had these products for a while so have been able to play around with them and see which work how I like them. I decided not to get the lip gloss as I have the dark red lip gloss from the Halloween collection and it seemed so close and I don’t use that often enough to buy this as well. If you do like dark red lip glosses though I think it’s worth looking at as their glosses are all well pigmented that I’ve tried so far and the darker colours often work as a bit of a lip stain as well which I like.

I’ll start with the finishing powder, I did swatch it but it was invisible really so I cropped it off the swatch line as it looked a bit odd. It’s called Always Angry and has the Hulk on the front, not surprisingly. I love how easy it is to blend into the skin and it leaves it feeling soft but not dry like some powders I’ve tried. It does look rather scary in the pot, it’s more pigmented than I thought it would be, but it does disappear and neutralise any redder patches very well. I get red blotchy skin sometimes, especially when it’s warm, which isn’t very attractive and this works really well at reducing that. On its own this product at full size (30g) cost $10 and can be found on this page, though buying it as part of the set it costs $9 to add to the eyeshadows. It’s also available as a sample size for $1.50.

And now onto the eyeshadows, these are all so pigmented and apply well. I do find there’s quite a bit of fall out with some though this isn’t too bad when you’re careful and you know which ones to pat on and not to try to use to blend. The individual eyeshadows in full size (2g) are $6 though you can also get them in half size jars (1g) for $3.50 and a sample bag for $1.

On the bottom of the pots it has the ingredients and also whether each colour is lip safe. If you want you can order a custom lip gloss in any of the shades that say they’re lip safe so if you like the colour and can see something similar in the other collections you might be able to get a matching lip gloss. The containers themselves have a clear bottom half which shows off the colours very well and a black lid with the sticker for the colour artwork on it. Inside these full size containers have a sifter which helps a lot with making sure the product doesn’t go everywhere, though as it’s so fine it can get a bit messy when opening if it gets knocked too much between uses.

I’ll do these top left to bottom right by rows: 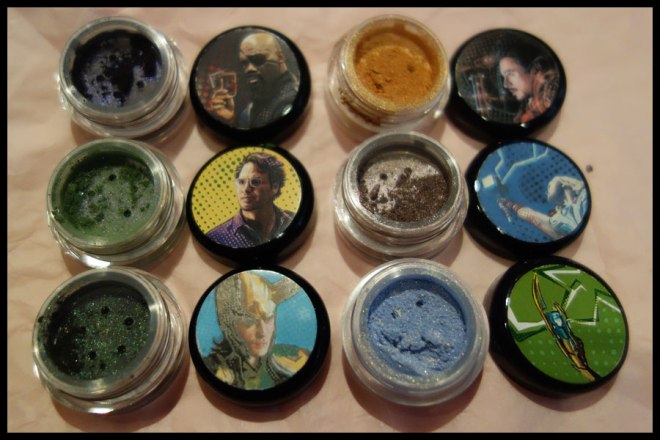 A Push in the Right Direction (top left) – The base for this is a deep purpley brown with blue duochrome which catches the light really well giving it a bit of sparkle. This is one of the ones that you have to be a bit careful with as I have found the tiny particles of shimmer do get everywhere but I think it’s worth it. The base has good pigmentation and seems fairly matte itself which makes the shimmer stand out even more.

Genius Billionaire Playboy Philanthropist – This is one of the ones I said is a go to colour, it’s an orangey gold with the same colour shimmer and in some lights it looks metallic. There’s a hint of a pinker gold in the shimmer which makes it look slightly peachy to me and makes it more subtle than it looks in the container.

Enormous Green Rage Monster – This is one of the colours I wish I could think of times to wear more, I love the combination of the green background with the purple shimmer particles in. I don’t think the purple shows up very well in photographs but it looks amazing in person, definitely one that stands out as different to me.

He Loves His Hammer – The other go to shade for me in this collection, it’s a purpley silver to me, though a dark silver rather than bright. It’s similar to a few products I have from other companies called taupe though I’m not all that sure what ‘taupe’ is. It has a pale purple or pink shimmer in it, though again they don’t seem to be coming out well in the photograph. If you use it thinly it works really well as a bit of shimmer over a purple eyeshadow.

Burdened With Glorious Purpose – if there was a product range based on the Avengers there had to be a product with this name didn’t there? It’s a really nice dark olive or khaki green to me with shimmer that’s mainly gold and greens. I don’t seem to get much fallout from this though it might be because you need so little of it to make an impact.

Glowstick of Destiny (bottom right) – Of the eyeshadows this seems the least pigmented when used on its own. It’s an icy pale blue with a slightly yellow tinted silver shimmer. Looks good when used with a white base as it makes the colour stand out, also works quite well on top of a darker colour if it’s a flat colour but then the yellowy silver is the main colour with the blue being a hint in the background. When you see this from some angles you don’t notice the blue, from the side it’s a very pale yellow but from straight on the blue shows more.

Something Sweet as Pain – A light bluey lilac colour with blue and light purple shimmer in it. The base is well pigmented and goes on really smoothly. I like this colour but haven’t really used it much yet, as I have blue eyes I tend not to use blue eyeshadows as much as other colours, I probably should use them more.

Cognitive Recalibration – A really nice maroon eyeshadow, I’d probably say a light plum colour but not sure if that’s a real colour or not. Has pale blue shimmer which stands out well against the background.

I Understood That Reference – Another name that had to be in there, I love these names! For some reason this one seems to want to photograph as royal blue when it’s really not that blue in person. I think the base is blue and that’s what the camera picks up but as there’s a red duochrome it looks purpler in person, a sort of royal purple that stands out a lot. I didn’t really get how this purple was to do with Captain America before but now I’ve looked really closely it’s the blue background, red and then it has some silver shimmer in it for the stars in the American flag, very clever.

That Man is Playing Galaga – (bottom right) – I think this is the most amazing colour of the lot though I haven’t worn it yet which is a pity. It’s a well pigmente

d matte black base with multi-coloured shimmer in it. There are so many colours and it looks different from all angles as the different particles catch the light as you move. It’s one I can’t wait to wear but I just can’t seem to get the look right or I chicken out before leaving the house. I think it’s one that will look amazing as a liner if I can find a mixing medium I like as I think it’d be really striking.

Overall I’m very happy with this set, I love how well the colours of the products themselves goes well with the characters and the image on the front. All of the main characters are covered with a couple of extra references in there as well.

I’ve tended to go for a few eyeshadows here and there (or maybe eight) that are all from different sets to get a range of colours but I think this was definitely worth the price to get them all in one go along with the finishing powder. I’m glad I decided against the lip gloss as I have something similar but if I hadn’t I’d probably have got that too. These colours are all very different from what I’ve bought from other companies, the combinations of colours makes them stand out, especially That Man is Playing Galaga and Enormous Green Rage Monster. There are a couple which are safer colours, at least to me, but still have a bit of sparkle to them that makes me choose them over other, similar colours.

Shiro Cosmetics have a good range of colours and themes available and it’s worth checking back regularly if you like loose powders as they do change the colour of the month on a monthly basis (I guess kind of obviously) and there are new themes and old ones being discontinued sometimes and those that are going disappear quickly once they’re in the sale. I’d also recommend the tinted lip balms, though I do miss the older intertubes they did before.