Before I go on with this post I have been away over the weekend so this is a scheduled post as I’m not really sure which day I’ll be back. If you’ve commented somewhere and it is still waiting to be moderated or I haven’t replied since Saturday I will probably get back to you today or tomorrow. Hope everyone had a good Easter! 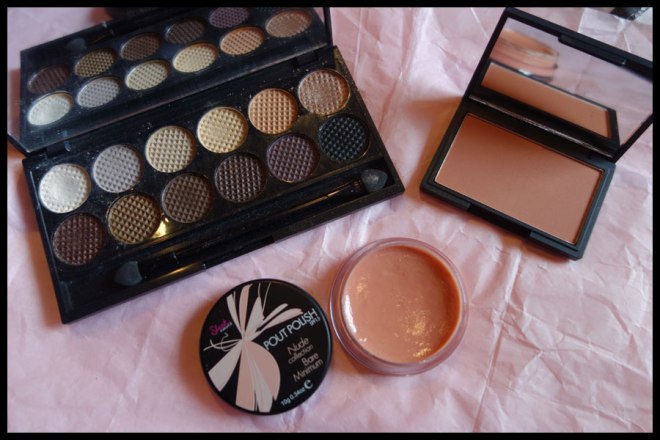 I’ve had these a while but I’m going to do a review series of budget palettes, probably mainly neutral to compare the cheaper companies out there, at least in the UK. As I’ve been using them I’ve had a chance to really try them all out, unfortunately I didn’t have my blog when I got then so they’re not brand new for photos, it does show which of them are my favourites though just through use.

For the first in this series I’ve chosen the Sleek Au Naturel palette, though as I bought the other two products in the set I decided just to review them all. As far as I’m aware these are all still available, definitely on their own store online and I’ve seen the palette in pretty much anywhere that sells Sleek makeup. As a company Sleek do not test on animals, one of the main reasons I tried them to start with, though not all products are vegan friendly so if you’re vegan it’s worth emailing them or searching on google as I found a few comprehensive lists of which products are and which aren’t.

The main item in this set is the palette. I’m a big fan of Sleek palettes and neutrals so this was one I was looking forward to getting. I keep the card boxes outside the palette for Sleek palettes and this box has a nice pattern on it in varying shades of peach whih ties in with the packaging for the pout polish 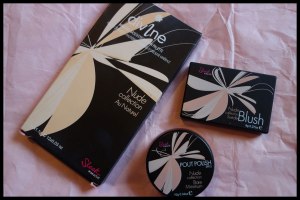 and blush which both have this pattern on them.

The palette itself is a matte black like all Sleek palettes with the Sleek makeup logo in a shiny black. There is the name of the palette and the collection in a matte grey which blends in well in the bottom right corner. It’s very subtle but means you can distinguish it from the others if you don’t keep the card boxes. The matte finish does mean that every fingerprint and mark shows up and it’s harder to wipe off but it looks more expensive to me than some of the similar priced palettes. It clicks together well even after being used a lot and the mirror stands up by itself. The mirror fills the entire lid and leans at any angle you want it without having to be up against anything. You do get one of the long double ended eyeshadow applicators though I’m not sure why I kept it, I’ve never used it.

The eyeshadows themselves are really smooth and blend well, some better than others and in this palette it’s the ones with a bit of shimmer or a more satin look finish that have the best pigmentation. The top row are the lighter colours with:

Nougat – just off white matte, slightly creamy colour that works well as a highlight or for the inner corner of the eye, I think I’ve used this the most of the colours

Nubuck – this is slightly powdery like most of the mattes, though it does blend well there was more fallout than I expected. It’s a good crease colour or one for blending out darker colours

Honeycomb – another matte one I used quite a bit, mainly to blend out colours towards my brow bone as it’s so light, a nice warm yellow colour but not that pigmented compared to what I’d expect

Toast – this is one the least pigmented of the colours, it’s slightly powdery but still blends fairly well, definitely one to tap more excess off when using as it does have quite a bit of fallout unless you pat it on for some reason

Taupe – I don’t know if this is a true taupe, the colour seems to range from a peachy colour to a browny green on youtube channels and I’m not sure what taupe should be. I’d say this was a nice shimmery champagne colour. It’s great as an all over lid colour and one I use very regularly for this, I think this is the smoothest and most pigmented of the shadows and my favourite in this palette.

The second row are the darker colours, they’re varying shades of brown though two of them appear very close in the palette.

Conker – my second favourite on this palette, this is a nice dark brown, on the redder side of brown and the name fits it perfectly. It has a bit of shimmer to it and is well pigmented, works well in the outer corner though there is a bit of fallout.

Moss – this name fits the colour very well, it’s a greeny brown, slightly browner than khaki. It’s got a bit of shimmer and very well pigmented though if you sweep it on rather than pat it it does lose about half of the pigmentation

Bark – A nice matte brown, blends very well and probably the creamiest of the mattes in the palette. The pigmentation is good but not as good as I expected, it does rub off pretty easily though it sticks very well with a primer. I tend to wear this on the outer corner and under my eye a bit with Taupe to give a bit of contrast with the shimmer and matte

Mineral Earth – a slightly darker version of Conker, a reddish brown with shimmer. OK pigmentation but the base colour isn’t as pigmented, the simmer gives it most of its colour

Regal – this was a nice surprise, the second most pigmented of the mattes and I expected it to be powdery. It’s nice and smooth and easy to blend with no fallout, I just find it’s rather dark for a matte for me, does work well under the eye though

Noir – I think of all the colours that Sleek do well the matte blacks are the best, though they do seem pretty hit and miss as I’ve had blacks in other palettes which aren’t too pigmented. This one is one of the best, especially for the price of the palette, it is easy to blend, smooth and has a good amount of pigmentation even without building it up.

I love this palette, the colours can be a bit hit and miss and I’d say the mattes aren’t as pigmented as the shimmers but that seems to be true of a lot of brands. In general they blend well and, apart from Moss, Cappuccino, Mineral Earth, Regal and Bark they’ve all had quite a bit of regular use. Those haven’t necessarily not been used because I didn’t like them, they’re mainly because they’re not colours I use. I’d say the weakest colours are Cappuccino, Toast and Mineral Earth and the best are Nougat, Taupe and Noir.

The blush and pout polish are neutral colours, neither are that pigmented but then I think that might be the idea of the collection as the Suede blush could be a more dramatic blush if it had more pigmentation.

The pout polish is in colour 963 Bare Minimum which is a pale nude colour. It has fair pigmentation though due to the colour it doesn’t make that much difference on my lips. It’s fairly moisturising, probably on par with cheaper lip balms but with a bit of a tint. It also has SPF 15 and I do wear it quite a bit in the summer. I do reapply it a few times over a few hours but as it doesn’t add much colour it doesn’t matter or build the colour up. I like it, it’s nice enough but nothing all that special really. I think their other colours would be better as it does sit for a while and I can feel the moisture on my lips which is likely to mean that the colour would last that long. The lid of the pout polish is a matte black with the same peachy image as the card outer box of the palette, the bottom half is clear plastic and it’s a fairly typical screw top lid.

The Blush in Suede is a coral blush though as pale as my skin is it’ll actually work for contouring more than blush. I haven’t used it that much because of this, I bought it before I really knew which colours I liked in blush and settled on pink but it’s nice to have this as an option if I wanted it. It’s not very pigmented but does build up well, it’s more of a brown muted coral rather than a bright orange coral. It’s a matte blush and does blend out well, it feels slightly powdery but picks up well on the brush. I’d say if you want a matte coral blush this would be worth checking out if you have medium to light tone skin. If you’re very fair like me it might work well for you as a contour like I’ve tried it as it’s matte. This blush also has a mirror in it which, like with the eyeshadow palette, takes up all the inside of the lid and stands up well on its own. It does work quite well as a small mirror for travelling as if you put it on a surface it holds itself up at whatever angle you set it. The packaging in general is a lot like the larger eyeshadow palette in that it’s a matte black background though it has the peachy image on it and ‘Blush’ on the front. It clicks closed and holds it very well even after being opened and closed quite a bit.

Overall I do quite like the collection, it’s a nice collection of products that do complement each other well. I would say for me though the one that has been most worth it is the palette, I do use the eyeshadows regularly and have gone back to them at times even after buying higher priced palettes. The blush and pout polish are nice and for their price are good if these are colours you’re looking for, the product type themselves are worth checking out though. I’m happy I have them but I think I could have chosen better colours for my own personal preferences.