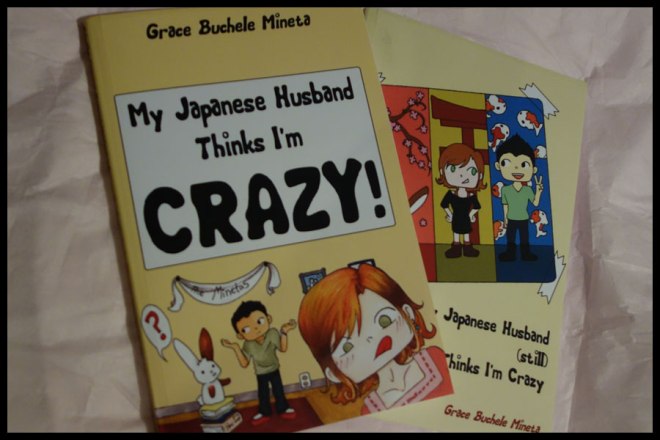 I just realised today I don’t think I’ve done a review of a book I’ve bought since doing this blog, which is odd considering I’ve bought quite a few and have actually recently bought a bookcase for these extra books along with a few others and found that it’s already full. I thought I’d do my first about these two books by Grace Buchele Mineta, who runs the texanintokyo blog and youtube channel, though I feel I’m a little late on this review as I’ve already read them multiple times.

I heard about these books on a youtube channel 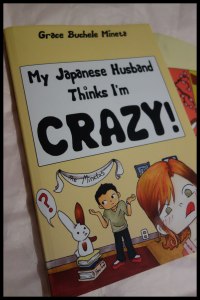 I downloaded them both for free and loved them so decided to buy the physical books themselves. This may sound weird but I have found that recently I have spent a lot of time in waiting rooms, these are normally hospital and doctor’s waiting rooms but this is sometimes broken up by dentist visits. Anyone who has a long term illness probably has a similar situation where the magazines that are left in waiting rooms that are ok to flick through for ten or fifteen minutes become monotonous when it’s the fourth visit in as many weeks. I have come up with the solution of buying ‘waiting room books’, which are books that are easy to pick up, read a few pages, or in this case comics, and then you can put them down at any point without losing your place or worrying about forgetting the story. These are ideal for that, or books for anywhere that you want to just pick up and put it down in between tasks, maybe put it next to the printer so you have something to do while it’s printing out pages or spending forever ‘preparing’ (why does it feel the need to do this at the most inconvenient time?). I have a few others I’ve bought and read multiple times n waiting rooms but thought I’d add to the collection.

The books are about various situations in the lives of Grace and Ryosuke, and Marvin the imaginary rabbit. These cover a range of topics but the majority are about life and situations in Japan as experienced through someone who has moved there. There are also tips about Japan that you don’t seem to get in a lot of guide books and comics and text pages about being in an interracial relationship. They both also have a foreword by Ryosuke, Grace’s husband, and I really like how funny it is and how his personality comes through in it, it’s worth reading even if you normally skip over the forewords, like I often do.

The majority of these books is in the form of comic strips which take up one half of the double page. There are pages which are more text based with little pictures to add to the description. In the first book, ‘My Japanese husband thinks I’m crazy’, the text is smaller than in the second which took me a while to realise. I’d say maybe around 10 in Word font size terms and the second book is maybe around 12-14. I actually prefer the smaller print, not just because it gets more on the page but I find smaller text easier to read for some strange reason. 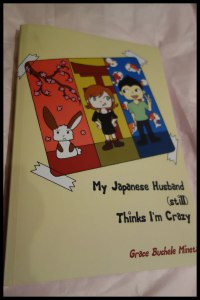 he one was written a year after the other. Some of the content comes from the blog texanintokyo.com so there is a bit of a linear story in that they were experienced after each other but don’t necessarily relate to each other. Some do follow on from each other but they’re normally printed in consecutive pages and it’s obvious that it’s all part of one longer story. I realise that’s a very long way of explaining it but brain fog isn’t helping with this blog post!

The art style is simple, after all it is a comic strip, but the characters have enough features that they get personality across and it’s obvious who is who. I also like the way that there is a key to the difference between English spoken bits and those originally in Japanese without the need for subtitles or a load of * in the corner of each speech bubble with a translation beneath like I’ve seen in some comics or manga showing Japanese speech in the background.

If you hadn’t guessed already I really love these books, I’ve read them multiple times since buying them and have been checking the blog and youtube channel since then. If you want an idea of the style of the books and you’re not sure if you want to buy them then I’d suggest you check out the blog first, there are lots of comics on there already along with longer posts about lots of different subjects. Some of the longer posts are the text sections of the book and I think the first book has more of the blog content as a percentage of the overall content than the second but they’re both worth the £9.61 and £8.91 I paid to me.

I don’t own the images on the book, they’re copyright to Grace Buchele Mineta, I just took the photos.