I bought some more things from Boots, this time I made an online order and it’s pretty much just things I forgot when I went in a couple of weeks ago, things that weren’t available in stores and a couple of things I needed but didn’t realise Boots would have. I did kind of make two orders, one I paid for with the Boots points I have from having an advantage card, they’ve been building up for a while and I really wanted new makeup brushes so I thought I’d treat myself and try some I’ve wanted to look at.

The first thing I got was more like 4 things but at a set price; the Rosé semi-permanent hair dye, shampoo, conditioner and the pencil. After dying my hair pink and it fading pretty much after 3 washes with a normal shampoo and conditioner I decided I wanted to give it another go and compare the results when I used the Rosé shampoo and conditioners to go with it. It turned out that getting the set of four, with the pencil as well, was £1 cheaper than getting the three things individually at £16 so I went for it and I may try to pink to colour strips or something. I can’t wait to see if these make the colour last longer as I did like the effect of the pink, just not so impressed by its longevity. You can buy the set online here, I’m not sure if it’s available as a set in store, I definitely didn’t see it last time or I’d have tried it.

I’ve needed new headphones for a while, at the moment I only have one pair of in-ear earphones which came with my Sony mp3 player and are great quality but for some reason, maybe the noise cancelling feature, it seems to remove all voices from everything on my iPad when I try to use them. I just went for a couple of cheap pairs, one Sony as I like their quality and a Griffin in case the Sonys have the same problem as my others. They were both in a 20% off sale online at the time so it seemed like it’d be a good idea to get them as I seem to go through these so quickly. The Sonys are the EX-15 in-ear headphones and normally cost £9.99, though they’re still £7.99 at the moment and can be found on this page. The Griffins are TuneBuds in-ear headphones and normally cost £7.99 on Boots, the offer makes them £6.39 and their page is here. Both of them are available in other colours, though I think it’s just pink on the Boots website. They’re both nice enough, the Sonys have a better quality sound with better bass and the Griffins are a little bit tinny but it’s good enough for what I want as the mp3 player headphones work with my mp3 player which is where I listen to most of my music. 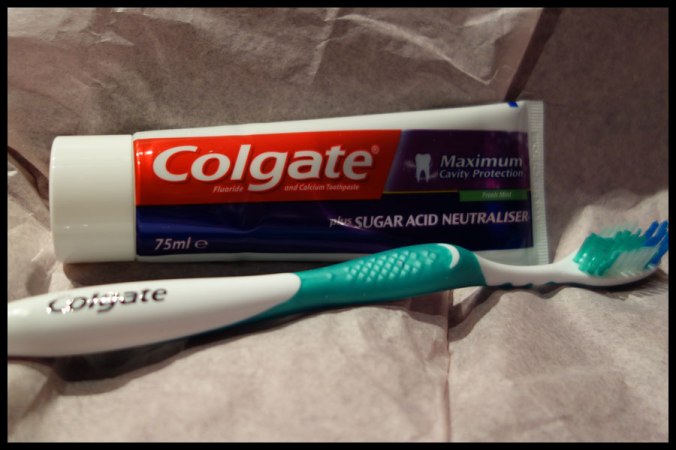 These are rather boring, I just needed a new toothbrush and like this kind with the small rubber bits in them, not sure why but it feels like it’s brushing better. The toothpaste was one I was recommended by my dentist so I’m giving it a go. They were both half price and the toothpaste cost £1.89 and the toothbrush is £1.49. They’re probably easiest to get in stores, they seem like they’re good so far but I don’t have much to say on either. 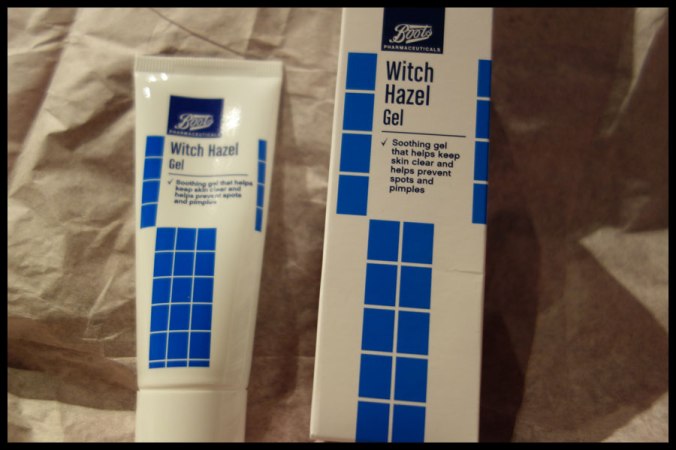 This was one of the main things I went into Boots for the other week but I was told it was discontinued. I’m not sure if it’s an online exclusive or if it’s just not in their store but I didn’t risk it and bought two as these last ages. This is one of those must have products for me when dealing with my problem skin. I’ve had acne and been o various medications for it since I was 14 during which time I have tried so many products I can’t remember them all and this dried up the spot and helps to remove it within days better than anything else I’ve tried that wasn’t prescribed. It can dry up the rest of my skin if I put it on too big an area but it’s worth it for me. I’ve found it’s good to use an ear bud and apply it to specific spots. If you have problem skin and don’t have a reaction to any of the ingredients (most aren’t nice natural ingredients and I’ve listed them below) then I would definitely suggest it to try. Also, it’s only £1.99 here which is cheaper than a lot of the products I tried over the years. They also used to do a witch hazel solution which came in a glass bottle but I’m not sure if they do any more, that was good and I used it as a cleanser.

I’ve bought this in the past and really liked it, this time I only got it because it was in a three for two offer and there were two things I was buying as gifts, which I haven’t included in this post. It’s 55g and comes in a nice glass jar, I really like their packaging and the design on the labels fits with the old style illustrations on their products. This has a nice sweet almond smell, it reminds me of a hand cream Lush used to do called Smitten, though this is a more subtle scent. They do a banana hand cream but when I smelled it it did smell of mushed up banana which didn’t really appeal to me but it appeared to be the same consistency, if almond isn’t your thing then that might be worth a look. It’s a thick cream that sinks in really well and would be great to carry in your bag if the packaging was more practical for this. I tend to prefer to use this in the night and use a lot of it as it’s so moisturising, also the jar looks nice on my bedside table and it’s a nice comforting scent for when you’re falling asleep rather than the fresher scents my other hand creams have. It costs £9.99 here and is still in the three for two offer.

These were on the list when I went in before but I forgot them, or rather a nail file and buffer thing were. As I’m doing my nails more I thought a proper buffer a

nd a nail file that’s better than those cheap emery boards you get in packs of 8 would be worth trying. I’ve never used a metal nail file before so it’s a bit strange having such a permanent one but it seems good so far. The buffer has 6 sections, each getting gradually finer from the coarsest to file your nails to the finest which adds a shine to the surface after using the ones in between to shape the nail and remove the ridges. I’ll have to see if the gel varnishes stick better after using this to smooth my nails a bit. The metal one w

as only £1.89 so if I don’t get on with it it’s not a huge loss as it’ll at least last as long as those packs do, it can be found here. The 6 way buffer cost £4 here and is in a three for two on Champneys products. I might do a better review on that when I’ve given it a proper try.

I’ve been impressed with my previous Ecotools brushes, I just haven’t used them that often as only one is an eyeshadow brush and I don’t wear much foundation or blush. These are smaller than I expected but they feel really soft and come i 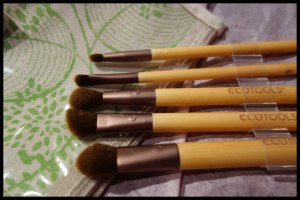 n a little pouch to carry them, there’s also a good range of sizes with the six brushes which include: large eye brush, angled crease brush, petite eye shading brush, highlighting brush and smudge brush. They cost £14.99 and can be found here though I bought them with my Boots points. I am definitely doing a more in depth review so I’m going to say much here but I look forward to playing around with them a bit first. They definitely seem like good ones for travel due to the size and they’re cruelty free. 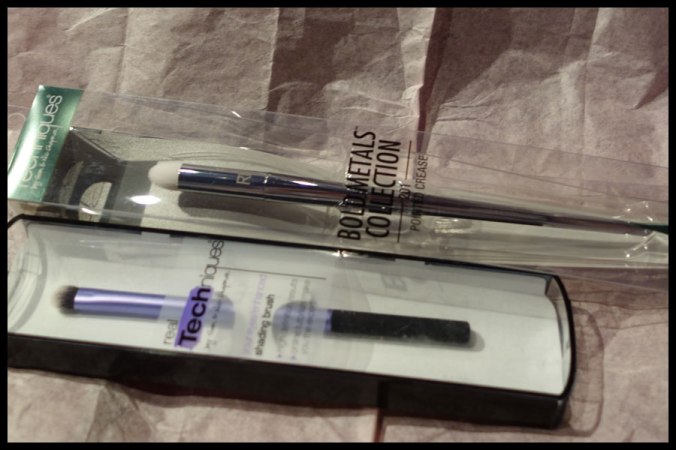 The final two brushes were the ones I was most looking forward to trying, I’ve watched Pixiwoo’s channel for years and have bought a few products on their recommendation so when they said about the brush line they were producing I wanted to get them. At the time I had good brushes and didn’t really want to spend that much on new ones as I wasn’t doing much with makeup and was buying the elf ones so these seemed expensive. They’re still more than I’d normally spend on brushes but as it was Boots points I thought I’d treat myself. I originally wanted one of the sets but I couldn’t afford it alongside the Ecotools and I loved the look of the new bold metals collection so got one from the original range and one from the bold metals range. I mainly use makeup on my eyes so it seemed to make sense to get the brushes for that. I’m going to do a proper review of these in the next week or two when I’ve had a good look and play around with them but so far they feel so good. I can definitely tell a difference between these and my cheaper brushes, I don’t have any other more expensive ones to compare to, and they look so nice, though the bold metals one is rather long and sticks up way beyond all my others so won’t be practical at all for travel which is a bit disappointing. I could probably talk about these for quite a while so I’ll leave that for the proper review but I will just say, so far they seem amazing and definitely worth the money. The shading brush cost £7.99 here and the bold metals pointed crease brush is £12 here. Another thing about these brushes before I finish is that they are also cruelty free, I try to make sure all my makeup is though I do sometimes slip up or miss something.

I think almost all of these are available in store too, I’m unsure about the Witch Hazel Gel and the earphones but other than that I’ve seen them all at one time or another.

So far, from the little I’ve used the new products, I really like everything I bought. Is there anything you’d like a better review of? Leave a comment below.

One thought on “Recent purchases: Boots.com”