A couple of weeks ago I posted about the things I bought in Boots, there were two Sensationail gel nail varnishes in it that I was really excited to try with my gel kit from Christmas so I thought I’d do a post about them and a couple of almost dupes I found in my normal nail varnish collection. These nail varnishes are for use with an LED lamp and cost £15 each, though at the moment online there’s a 3 for 2 offer on Sensationail. I’m not sure why but going through the normal links doesn’t work for me, this search does show the complete range of nail varnishes they sell on Boots.

Taupe Tulips is a light neutral colour that seems perfect for any time of year though especially in the Spring or summer as it’s slightly lighter than a lot of the neutral or nude colours I’ve seen out. It’s a great match for me as my skin is pale, for people with darker skin it might appear quite light. The Sugar Plum colour is a dark purple, definitely a really nice plum colour that I will wear a lot. It’s the sort of colour that appears a lot in the Autumn and Winter collections but I like similar colours all year round as they go with so many things.

I like the fact that you can see the colour of the nail varnish on the box, the colour on the top is true to how the nail varnish turns out even if the varnish itself is lighter when you look in the bottle, at least in the one I’ve tried so far. Inside the box it contains a little instruction paper, a small manicure stick and the bottle itself. I do prefer the design of these bottles with the matte black and the sticker showing the colour rather than the coloured bottles that Red Carpet Manicure use but the brushes on these are smaller and it does make it a bit harder to use, for me anyway. I like the fact there’s the small wooden manicure stick in there as you do need them for removal even if you don’t need them for preparing your cuticles and it means you don’t have to buy those separately.

Not long after getting the set I tried out the taupe tulips varnish, this is definitely a nice neutral colour that I think would go with anything and apparently nudes are ‘in’ at the moment so it’s a good Spring colour. It’s slightly lighter before cured than after the two layers used with eh LED lamp though I didn’t notice this colour change as I did it.

When I did it I tried following the instructions that came with the nail varnish but after the 60 seconds there was no difference and it was still runny so I left it for the additional 2 minutes given on the light’s instruction leaflet. This did make a bigger difference but it was still extremely sticky and the slightest thing got stuck to it. I had the nail varnish bottle on the side and I knocked it over, I had to grab it before it could spill everywhere but my nails accidentally touched the blanket and any piece of fluff in the area seemed to decide to stick. You can see in the photo of my thumb nail how the fluff got stuck. The layers were also so thin that even with an additional two on top of the bottom one these could still be seen when the little bit of fluff with the Red Carpet Manicure set got covered by the second coat. Unfortunately the fluff that got on the nails did make the ends rather rough so I had to file them afterwards so they didn’t catch on everything.

The nail varnish itself was very thin and definitely needed the three coats, I could have almost done a fourth but I knew the top coat adds quite a bit of thickness and I didn’t want them to be too thick. After adding the top coat from the Red Carpet Manicure set I had no problems, the finish was nice enough considering the bits on it and I really liked the colour. The mess when applying it has put me off getting this brand if there are others I prefer out there but I’m glad I tried it. I’m sure it will be a case of practicing with the brand and being extra careful when using it so I’ll be using these varnishes, I just might not repurchase them. 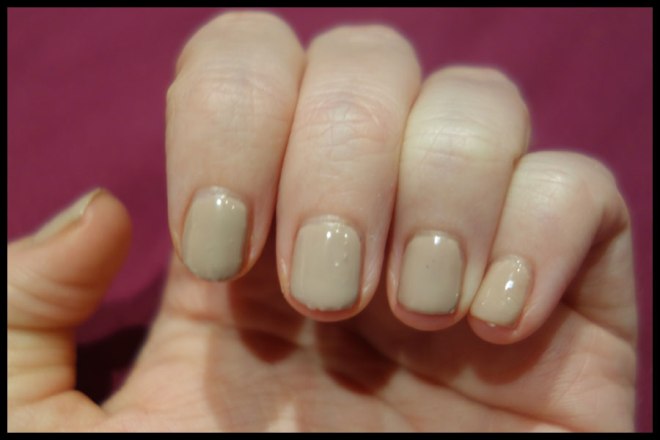 First of all, these say they’re meant to be used with their own brand LED lamp and, although I don’t think that should make a difference, there is a chance that any problems I have were due to the fact I used the Red Carpet Manicure one I have. Saying that I did choose the Red Carpet Manicure set in the first place as people posted in reviews of the Sensationail set that the varnish itself was very runny and sticky between coats even when set so I’m not sure how much difference it made. I’m going to try the other colour tomorrow so I’ll see what happens with that. I’ve only found a few gel nail varnish brands in the UK, there’s another from ASOS I want to give a go but if you can recommend any others I’d love to hear from you, I’m just learning about this at the moment and remember how many brands I went through with normal ones before I found my favourites.

Overall I do like these two Sensationail nail varnishes, just not as much as the Red Carpet Manicure ones. I think that if you have more patience and probably a steadier hand than me then these would be a good brand to try for gel nail varnishes. I do like the way the colours on the box match the final colour of the varnish and they’re a lot easier to get in the UK than any other gel varnish that I’ve seen but I’m not sure that makes up for the problems I had with application. I’ll be using the bottles I have and maybe by the time I’ve finished them they will have won me over, if not then I’ll be sticking to others. If the colours weren’t ones I already love and use all the time then I don’t think I’d be as happy with these, I’d suggest only giving them a go if you like thin nail varnishes, have their own lamp that will guarantee the correct results, or the colour is one you love and isn’t available elsewhere in gel varnish.

When I was using them, and even more when I was taking these photos, I realised how similar they looked to some I had in my normal nail varnish collection. I thought you guys might be interested in the two dupes I found that are pretty close to these colours but cost a lot less in normal nail varnishes.

Taupe Tulips and Models Own Nude Beige are very close, they don’t look like it in the bottle before the Sensationail one has cured but afterwards I foun

d them to be very close. The Models Own one costs £5 and can be found in quite a few places, I’ve mainly bought from their own site and Boots as there are often sales on both. I use Nude Beige very often, it’s only a third full now, it’s my go to nude nail varnish and worth a look if you need a neutral colour and want to get one that isn’t too expensive. 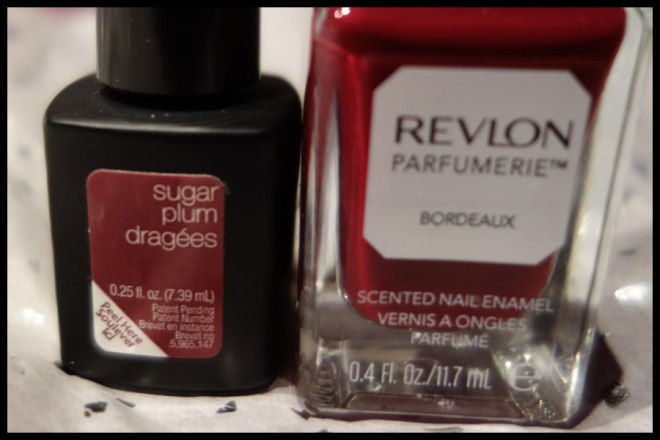 There are a few that Sugar Plum reminded me of but next to each other the others weren’t so close, the Revlon Parfumerie scented nail varnish in Bordeaux however was very close. I haven’t used this one so much simply because I have a few similar colours that are a bit darker and I’ve worn them more an

d I feel like it’s a bit of a waste using a scented nail varnish with a top coat but without one this just doesn’t last on my nails. It’s a colour I love and I think it just got lost in amongst the others. I think this is a closer match than the other two though the Bordeaux is slightly redder than Sugar Plum. These are available in many places, pretty much anywhere that sells Revlon I’ve seen them, normally costing around £6.50 and often in offers.