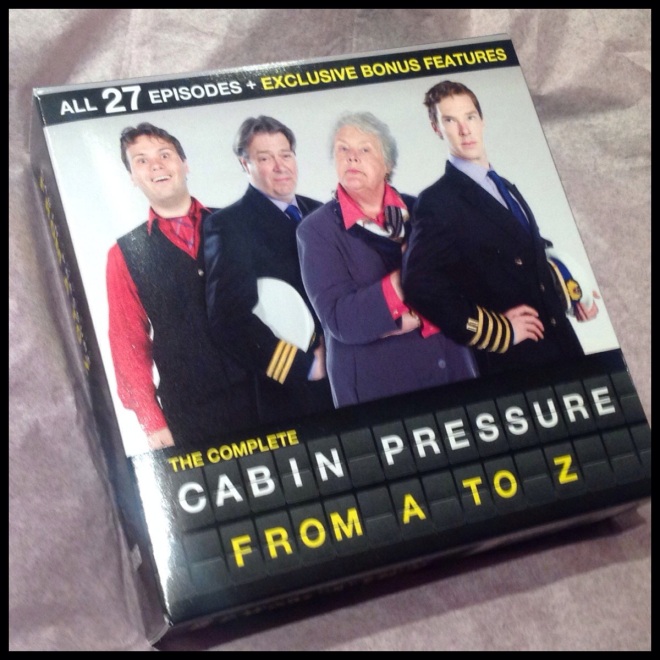 Cabin Pressure is a Radio 4 comedy program that finished on Christmas. It has four main characters; Caroline (Stephanie Cole), Martin (Benedict Cumberbatch), Douglas (Roger Allam) and Arthur (John Finnemore), though there are some recurring characters and a lot of others they meet on their journeys, and is written by John Finnemore. It’s based around four employees, including the owner, of an independent airline (or as Caroline calls it an air dot) and their flights with passengers, freight and sometimes just by themselves. There are 4 series, a Christmas special and the two part finale which I don’t think counts as a series but that seems to depend on which website you read. Each episode is named after a city in the storyline and they travel in alphabetical order, missing a few letters on the way.

I pre-ordered this set a while ago in December and the date of release seemed to change a few times but it got here yesterday so I thought I’d do a review of the set.

I think the main reason a lot of people on the internet, or certain areas of it anyway) have heard of it is one of Benedict Cumberbatch. I have to admit that I only heard of it because of him and the fact that at one point in time nearly all of the people I followed on Tumblr seemed to be posting quotes, pictures and anything they could about him and some of these popped up amongst them and made me laugh so I thought I would check this out. Before listening to this I wasn’t a fan of his really, I should probably hide behind a sofa after saying that though. I found one of the episodes on iPlayer at the time and had to hear more, I ended up buying a couple of the series on iTunes though as it used audible they didn’t survive me plugging it into my computer for some reason. I mainly bought this set to have all the series and having a hard copy means that no matter what happens on the computer I can listen to it even though I have got a couple of the series on iTunes.

I won’t do too long a reviews the series itself though I do really like it and recommend finding it somewhere on the internet if iPlayer doesn’t have it or it’s not available in your country. It’s a sitcom filmed in front of a live audience so no canned laughter which sometimes gets on my nerves. Although there isn’t a great range of settings and most of the scenes take place in the plane so have a very limited space, the fact they literally can’t get far away from each other makes a great setting for a sitcom, especially one with such a small cast. The characters themselves and their reactions are what makes this series so funny, Martin and Douglas the two captains who are polar opposites, Caroline the owner and Arthur who you feel wouldn’t survive in any other job for very long. Even the plane itself, or GERTI, becomes a character in the series with all her faults and bits falling off or breaking down as they go. I love the interactions and the development of the characters throughout the series, they do stick to their very obvious differences but events like Birling day, an annual event where they fly a rich man to the six nations final, show how certain elements seem to change them and makes the relationships between them all seem so much closer at the end of the finale and almost like a small, rather dysfunctional, family.

Inside the set is the box of CDs themselves and a small booklet with photos of things from the series done by the characters, mainly Arthur, and small descriptions of each episode and the guest stars. On the CDs are the episodes themselves but the last CD also includes an interview with John Finnemore and apparently includes extras like deleted scenes and secrets though I haven’t got to this yet. The box of the CDs has a really nice cover, it’s very different from previous CDs for this series which have a promo photo of the four main characters on them in different poses. I really like this pop art style with the basic silhouettes and inside the case on the back of this are photos of the actors, I guess from recordings or readings, on the same colour background as their character on the front. 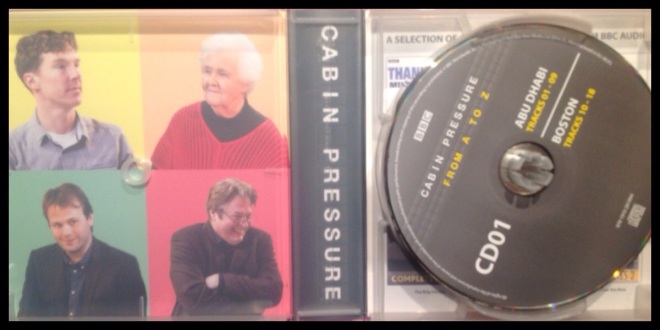 The plastic case itself seems to be the style a lot of the multi CD cases have had recently from the BBC with them all stacked on top of each other and a big cylinder up the middle they all slot onto. I don’t really like this, I prefer the ones where they all have their separate parts they click into, like with DVD cases of series, but with 14 discs I can see why they’d do that. It is making me consider buying a better cd case just for it and transfer them into that for storage as, if I actually use these CDs regularly, they could get damaged and I have a feeling if I tried to get the middle ones out I’d end up with it out of order and them falling everywhere as they did when I took the photo. 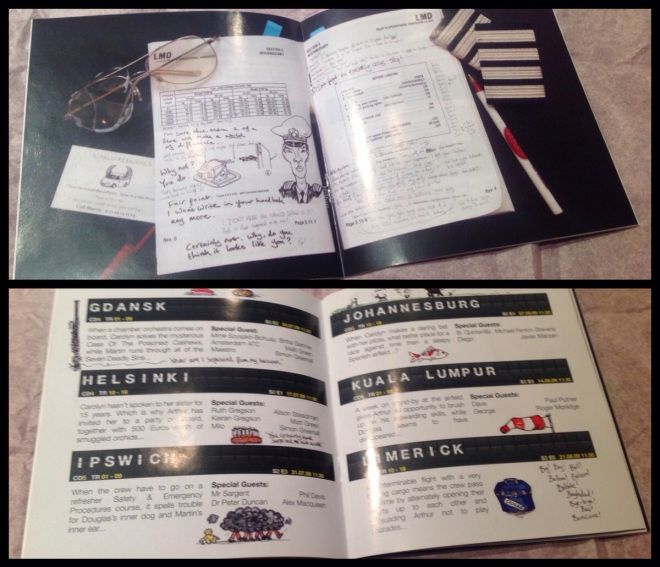 I love the little bits of information and pages of photos of bits written as the characters included in the booklet alongside the episode information. These include, but aren’t limited to, a detailed sketch of GERTI with Arthur’s notes on different parts, a page of scraps and a notebook that Douglas has written lists from various games in, some episode ideas that never happened and rules to yellow car and the travelling lemon. I have to say that this little booklet makes this set even better, I don’t always see the point of these extra books they add into sets but this one adds to the series and characters rather than just being a behind the scenes photo book that you often get.

Overall I love this set, the look and the bonus features as well as the series itself. If you have them all, or some, already I’m not sure it’d be worth it but if you haven’t then getting this set would definitely be worth considering if you like having a hard copy of the series rather than just files on a computer. If you prefer that then buying the series as albums is best as then you won’t lose them, audio so seem to have a habit of disappearing if they’re audible ones for me. They’re currently £6.99 on iTunes for the full series individually and the Christmas and recent Zurich episodes are cheaper but buying them on CD I found hard to find at a reasonable price, they all seemed to be around £15 – £20 each where this set works out a lot cheaper with 4 series and the two specials for £34.95 when I pre-ordered it.