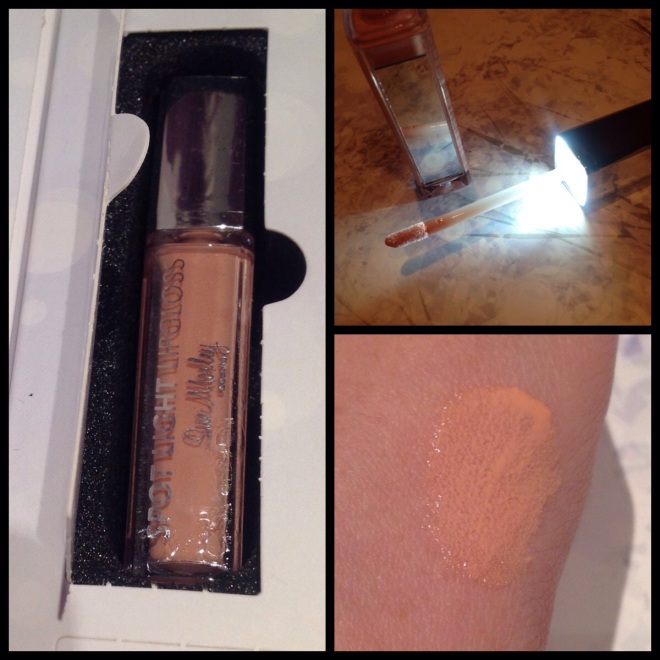 Another full size product today, this is a ‘spot light lipgloss’ by Sue Moxley beauty in the shade babe. The main selling point for this product besides the lip gloss itself seems to be the spotlight that is hidden in the lid. The light is turned on with a rubber button on the top of the lid, it’s very easy to turn on though I don’t think it would be pressed accidentally in a bag as there’s and indent on the top of the lid that this is in and the top of the button is level with the edges of the lid. This means the battery inside is less likely to run down by mistake when not in use, I don’t think the batteries would be replaceable as the lid is a single moulded piece and it probably wouldn’t be worth it anyway.

The light itself is very bright as shown in the photo, it was light in the room but it made the surrounding room appear darker. It’s a fairly blue light as with a lot of led lights and using the mirror it actually works as it should and would make it easier to apply the gloss in the dark. I don’t think I will be using it like that personally but as I’ll keep it in my bag itself actually work fairly well as a torch if I really needed one.

This shade seems like one that a lot of people might use as it’s a fairly neutral shade and has no shimmer in it. It’s nice and creamy and doesn’t leave my lips feeling very sticky, it sinks in pretty quickly and the colour lasts as well as most lip glosses though I’m not sure it would survive eating or drinking. It’s well pigmented but as it’s fairly thin I did find that if I use all that came off on the applicator there was too much for my lips and when I closed them there was a ring of colour around the edge so I had to push it on with my finger. My lips are dry in the winter even using a lot of products and this gloss did show any cracks or dry patches quite a lot so I will probably be using it more in the warmer months when I don’t have this problem.

This seems to be sold in a few places and costs either £1.99 or £2.99. I would say it’s a nice enough lip gloss especially for that price but I won’t personally be buying it. It’s a nice size, 8ml, and I think this’ll last me quite a while so I might have changed my mind by then.